Why do Centipedes always have an odd number of pairs of legs?

Furthermore, centipedes are within the Myriapoda, a subphylum of arthropods which also contains millipedes. Do millipedes also have an odd number pair of legs?

Centipedes are part of the group of insects that utilize a short germ-band mode of embryonic development.1 One feature of this type of segmentation is that new segments are added sequentially to the end of the developing insect (the "posterior proliferative zone"). This is in contrast to insects that undergo long germ-band gastrulation, like Drosophila, where all segments are created simultaneously. 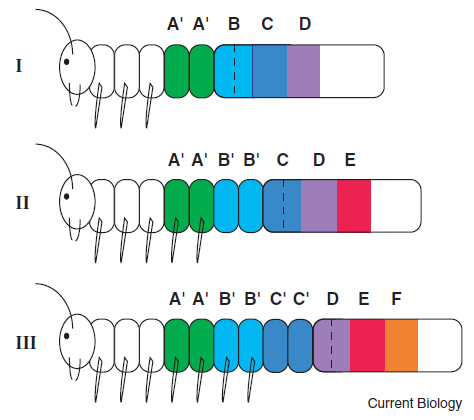 Figure 2. Segmentation in the geophilomorph centipedes involves a phase of double segmental periodicity. The drawing shows a schematic model for segmentation in geophilomorphic centipedes. Segments are patterned in posterior tissue that does not show overt segmentation. Segments become molecularly defined in entities (coloured blocks) that eventually give rise to two segments each. Before morphological segments become visible, these two-segment entities are molecularly subdivided into segmental units (dashed lines), which each eventually will give rise to one segment. For instance, at stage I C represents an entity that is refined into two units (C at stage II), which give rise to one segment each (C′ at stage III). This mechanism of segmentation provides a developmental constraint that only allows the addition of segments in bits of two and in this way only allows odd numbers of trunk segments in centipedes.

One would expect, then, to only see even numbers of leg pairs. Arthur and Chipman explain this discrepancy in their 2005 essay 3 on Strigamia maritima, the most well-studied member of the Myriapoda subphylum.

Of course, if everything happens in twos, we would expect that there would always be an even, rather than odd, number of segments. But this apparent discrepancy is probably not real. It seems likely that the poison claw segment immediately anterior to the first pair of legs is really a modified trunk segment.

As for how Myriapoda add segments two at a time, I direct you to sources like Chipman and Akam 2008 4, though be prepared for some heavy reading on signaling cascades and morphogen gradients.

[W]e suggest that the myriapods have developed their unique body plan largely by expanding the number of segments under the control of the ‘trunk’ genes.

In a way, Wikipedia states that the Craterostigmomorpha centipede doesn't: "They have a distinct body plan; their anamorphosis comprises a single stage: in their first moult, they grow from having 12 segments to having 15." Albeit, no source for that.

It seems that they always have an even amount of legs or an odd amount of leg pairs on a genetic level, hoc genes:

It gets very technical; if you really want to dig deep, perhaps look at the similar articles (after the abstracts) in the sources.

Not the answer you're looking for? Browse other questions tagged zoology development invertebrates arthropod or ask your own question.

8
Is the number of legs in myriapoda determined entirely by the genome?
26
Why are there no known animals with an odd number of legs?
8
Examples of animals with 12-28 legs?
7
Is this a saltwater millipede?
14
Name and Behaviour of Arthropods near a Cactus
5
Species identification - what kind of worm is this?
0
Is this arthropod non-intrusive and recommended to be left alive?