Recently, in the UK's daily government briefing they started showing the graphs that compare national death rates, adjusted by the population size of each country.

But, why would the rate of infection be different because of the population size? Surely, when a virus reaches the shores of a new country, it doesn't think to itself "hey, there are a lot of people here, I'd better spread faster"...?

I hate to sound like a conspiracy theorist, but right now we in the UK might be the worst-hit in Europe, and I wonder if showing these graphs adjusted by population size might be a political attempt to make us look "not quite so bad".

But, I am very ignorant of biology and epidemiology, so maybe there is a sensible reason for adjusting these graphs by population size. Can somebody explain it to me?

Update: I have noticed that over the last few days, the UK government briefing has stopped including the charts that are adjusted by population size.

It depends on what you want the graph to show you (and not just whether it makes the epidemic look more or less scary). For example, if viewers are interested in the overall impact of the epidemic, they might want to know about per capita deaths rather than total deaths (here I will only use "rate" to mean "number per unit time" rather than "number per individuals").

You're right that (1) we don't expect the epidemic growth rate (measured by cases or hospitalizations or deaths) to depend on population size (initially - once enough people have been infected to significantly deplete the pool of susceptibles, the population size does matter) and (2) naively plotting per capita deaths of regions with widely differing population sizes can be misleading.

A good solution, used by the widely redistributed Financial Times COVID-19 plots, is to plot the time axis as the number of days since 0.1 average deaths (per million) first recorded (obviously you can pick a different per capita threshold); this sets the scale appropriately for regions of different sizes.

For example this chart: 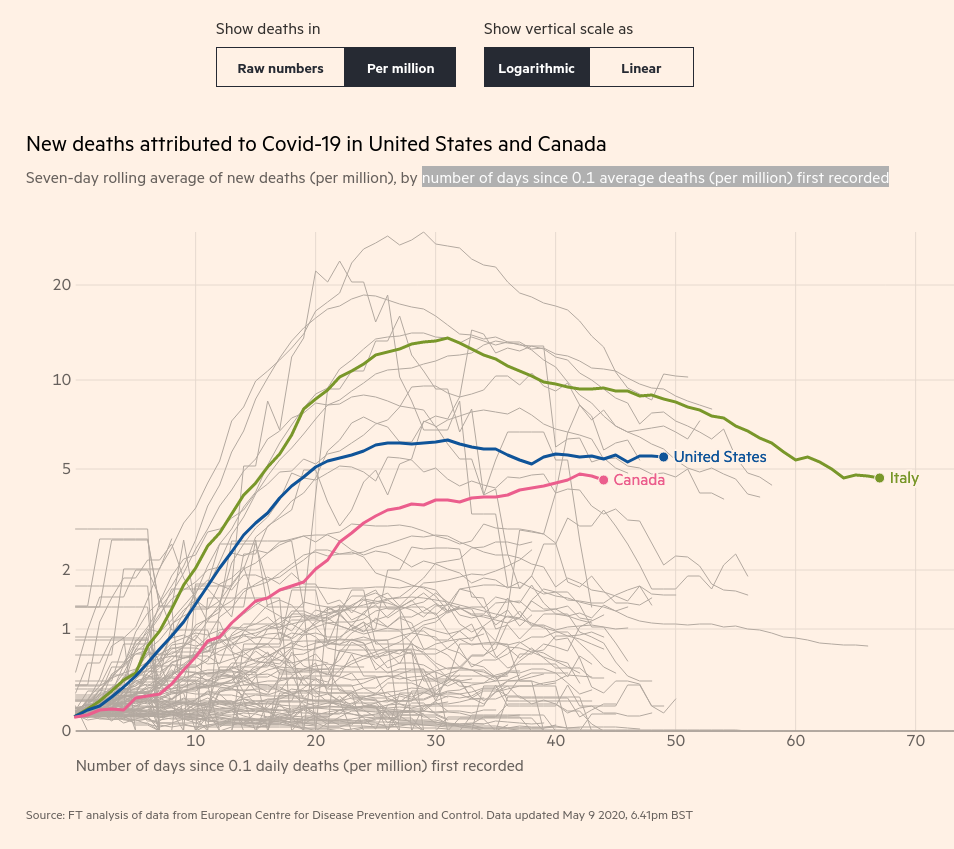 It looks from The Guardian's story that the government's plots are adjusted to "number of days since 50 deaths". It would seem better to use a threshold based on a per capita threshold (larger countries will hit the 50-death threshold sooner) ...

3
Is the Basic Reproduction Number in epidemiology dependent on population size?
4
Factors of infection rate
1
About how many covid-19 virus particles is required in the human body before infection and sickness follows?
0
COVID-19 deaths by year of birth?
3
What causes people to smell one persistent smell during Covid-19 infection?
3
The probability meaning of Covid variants