Why do the calicheamicins bind to DNA at the minor, rather than the major, groove?

I am trying to understand why some drugs bind only to the minor groove and not to the major groove. More specifically, I am interested in calicheamicins.

They target DNA and cause strand scission. Calicheamicins bind with DNA in the minor groove, wherein they then undergo a reaction analogous to the Bergman cyclization to generate a diradical species. This diradical, 1,4-didehydrobenzene, then abstracts hydrogen atoms from the deoxyribose (sugar) backbone of DNA, which ultimately leads to strand scission.[7] The specificity of binding of calicheamicin to the minor groove of DNA has been demonstrated.

Accommodation in the major or minor groove

I am not in a position to generalize about all drugs that bind to the major groove of DNA, but at least one well-known example, actinomycin D, does so because it intercalates between the base-pairs in the double helix. Although other weak chemical interactions stabilize this binding, much of it is through base stacking with base-pairs. Hence binding requires it be inserted into the major groove in which the base pairs lie (see e.g. PDB 101 Molecule of the Month article).

Binding of calicheamicins, in contrast, involves interaction with two parts of the molecule. The ‘head’ of the molecule makes specific interactions with a TCCT sequence in the DNA (in the case of calicheamicin γ1), which is achieved from the minor groove (intercalation is not necessary) allowing the saccharide ‘tail’ to fit into the minor groove. (Ikemoto et al. 1995). 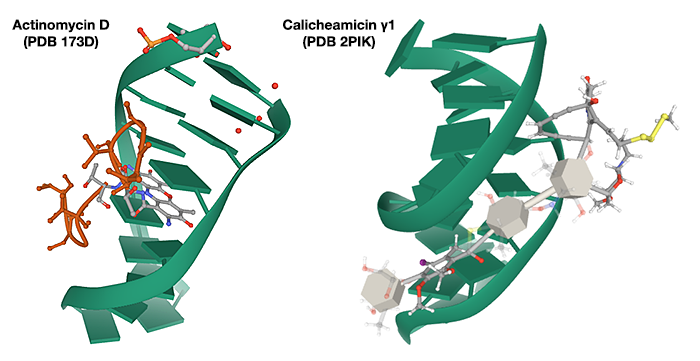 A concern of the poster is the fact that the interaction of calicheamicin is sequence specific (there is apparently a preference for d(T-C-C-T).d(A-G-G-A)) whereas access to the bases is restricted in the minor groove. This is addressed in the paper by Ikemoto et al., but without illustration, assuming you are able to visualize the chemical interactions in your mind. I have used Jmol to view the structure 2PIK, have prepared a couple of screen shots to help illustrate the details I shall quote from the text of the paper.

Cleavage of the DNA is performed by the enediyne aglycone (R), which does not make contact with the bases. Two of the regions that do interact with bases are the thio-sugar ring (B) and the aromatic ring (C). These are shown below in the complex of calicheamicin (coloured yellow) with a deoxy-oligonucleotide duplex, together with a close-up of the interactions of these rings. 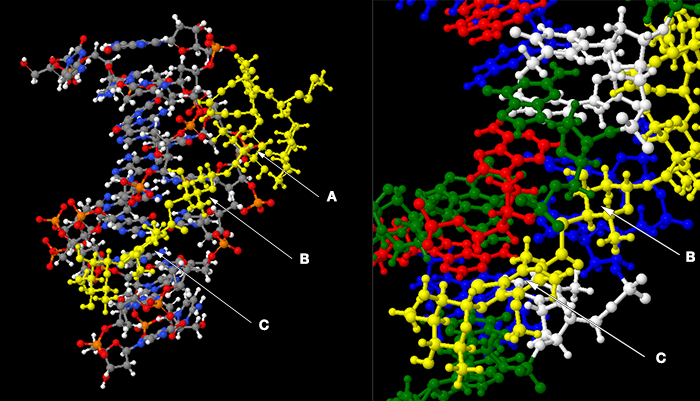 In the left-hand frame the DNA has standard cpk colouring, and the phosphates (orange–red) lining the minor groove are evident. The base-pairs are perpendicular to the plane of the image. In the second frame I have tilted the image slightly to allow the rings of the bases to be seen, and coloured the bases (actually the whole nucleoside) red/white/green/blue for A/T/G/C. Quoting from the Ikemoto paper:

This may not have the clarity of, say, Watson and Crick base-pairing, but neither does the interaction of proteins with particular DNA sequences — one needs to examine the multiple interactions that occur. What I think it does show is that this drug can make specific contact to bases, even though it binds in the minor groove.

Not the answer you're looking for? Browse other questions tagged dna pharmacology 3d-structure or ask your own question.

2
How do you biologists draw a protein when you write a paper?

112
Why is thymine rather than uracil used in DNA?
3
Why do the major and minor groove exist in DNA?
4
What are the major causes of mutations in DNA?
14
Do transcription factors bind to both strands of DNA?
14
Why is uracil, rather than thymine, used in RNA?
0
Do single nucleotides spontaneously bind to ss DNA?