I am reading Nonlinear Dynamics and Chaos with Applications to Physics, Biology, Chemistry, and Engineering, 2nd Ed. (Strogatz 2015). I came across a problem involving the Allee Effect which I have not been able to solve. Problem:

I tried comparing terms with the Allee effect as stated on Wikipedia,

but it is still not clear to me how to solve this. Can someone please help?

Since my last post, I have tried plotting several values for the parameters, and I solved for the zeros of this equation. My guess, is that I am supposed to qualitatively analyze this plot and see that it is maximized for intermediate values of N. I am including a picture from Mathematica of my work. Please let me know if I am on the wrong track. 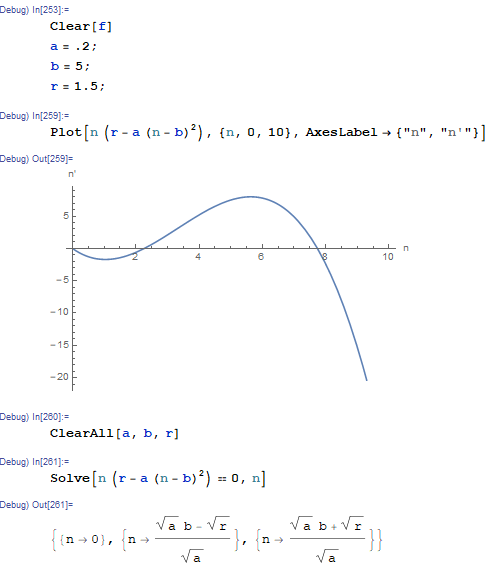 You're not interpreting that Wikipedia page correctly. That equation provides an example of the Allee effect, but is not exclusive.

The Allee effect occurs when the non-zero steady state of a system is not globally attractive, so that such populations may be stable at non-zero population levels for a long time, but are unable to recover once the population density drops below a certain threshold.

In terms of your problem, the tricky bit (conditions for global attraction) is done for you as it instructs you to find parameters so that $\frac{\dot{N}}{N}$ is maximum for intermediate (positive) $N$.

So when does $f(N) = r - a(N-b)^2$ have a maximum admitted at some positive $N$? This is a quadratic, so simple mathematics is enough.

So overall quite boring conditions and not a very satisfying question.

Not the answer you're looking for? Browse other questions tagged population-dynamics or ask your own question.