In my textbook and most of the sources I have checked, it is stated that recombination frequency in eukaryotes give us knowledge on the location of the loci. I don't understand the direct correlation between the distance between the genes we are investigating and the recombination frequency. Assume that the recombinant gamete frequency of is around 35%, why does it mean that those genes would be located on the opposite ends of the chromosome? Do all crossover events take place with a single break on one chromosome? I have searched the crossing over mechanism for a bit and have seen diagrams in which two breaks occured and the DNA chunk acquired seemed to be transplanted, although it was in general a tad too complex for my understanding. If you have a link to a clearer and more concise explanation of the mechanism, it would be much appreciated! Please forgive my ignorance if that's a very basic question, I'm just a high school student.

genetic-linkage crossover
Share
Improve this question
asked May 31 '20 at 14:46

As a silly example:

Let's say that you are traveling along a road where you know there are bandits and thieves. You want to finish your journey quickly, and spend very little time on the road, because the more time you spend on the road, the more likely it is that you are robbed and they take your money away. If there are more thieves around one day, you still want to spend as little time on the road as possible, it's just that the risk is higher.

Using this logic, you can then try to figure out how far away two cities are on the road by how likely you are to be robbed by thieves while traveling between them.

Just substitute "chromosome" for "road", "crossover" for "robbed by thieves". You measure how far away two loci are by how likely there is to be a crossover between them.

It may help to think of it in a different way. There is nothing preventing multiple crossovers, but having more crossovers saturates with increasing distance. Here is one plot of how you can think of linkage (I just generated this, it's not mathematically accurate, only for demonstrating simple point): 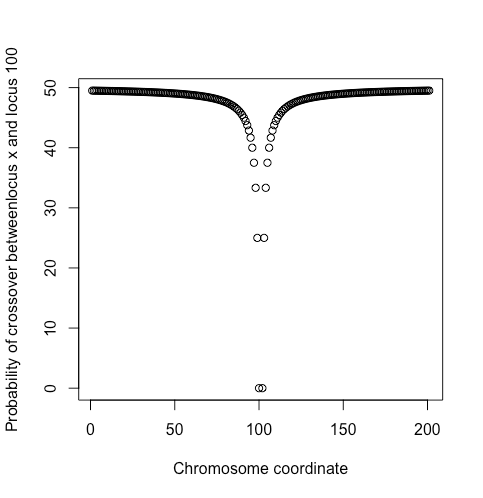 Another confusing feature is that the maximum number of recombinants (usually) is 50%, because at that point the two loci are assorting independently, e.g. completely unlinked and behave as if they are on different chromosomes. However, two loci can be "unlinked" and still be on the same chromosome, they are just quite far apart then.

This is not really changed by multiple crossovers. The same principle of "loci further away" --> "weaker linkage between loci" is the same no matter how many crossovers occur in a chromosome. More crossovers just means that the map is "expanded", because everything is more weakly linked than with fewer crossovers per chromosome.

Recombination only occurs between homologous chromosomes.

So when recombination happens, the locus doesn't transfer to a different chromosome. It stays on the "same" chromosome, it's just a different version of the same chromosome. See this image (Figure 2):

You can think of a chromosome as a collection of loci in some linear order. This will arrangement will be the same (or close enough, for our purposes) for each chromosome of a homologous pair. It may have different versions of the locus on each chromosome of the pair. We call these different versions "alleles", which in Figure 2 are labeled "A" and "a" for locus A or "B"/"b" for locus B. So we start with types AB and ab, but if recombination happens then we would observe types Ab and aB. The loci didn't move between chromosomes, they just exchanged alleles.

In terms of how loci "split", think of them as two chains of the same length. When recombination happens you cut one link of each chain, exchange pieces, and rejoin the chains. See Figure 3: 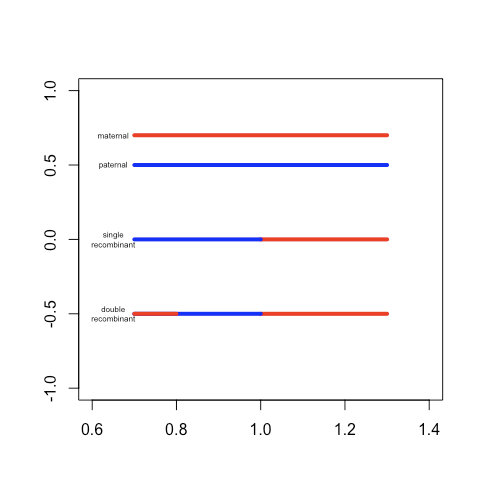 There are two main question: (a) dependence of the frequency of recombination with the distance that separates genes and (b) do all crossover events take place with a single break on one chromosome?

Even though chromosome crossovers can potentially take place at any site, the probability of such events occurring is proportional to the distance that separates two genes, which implies that genes that are separated by a great distance (one in the p-arm and the other in the q-arm, for example) are more likely to be split apart than any pair of genes which are closer to each other. The classical explanation is that there are physical impediments to the formation of chiasmata when genes are close to each other, such that the chromosome crossovers between neighboring genes is unfavorable, while the formation of chiasmata when the genes are far away lacks such physical impediments, and is therefore more favorable (question a).

https://i.stack.imgur.com/2LbJT.png. A non-sister chromatid with three distinct genes (A, B and C). In addition, 1,2,3 and 4 are other genes.

A more intuitive way of understanding such dependence is by considering that chromosome crossover is random. Let's consider a non-sister chromatid, like the one in the figure above, whose genes A and C are far from each other. In order for recombination to take place between A and C, there would have a break in the space between the two genes. Because this distance is big, such break could take place in 1, 2, 3 or 4 (and many more), in the other hand, if we consider a recombination between the genes A and B, the only possible way to achieve this is by a break in 1. Because crossover is random, since there are a lot more possible sites of breakage between distant genes, it is more likely that one of these many places is selected as the site of crossover. Crudely speaking, it is analogous to the throw of a dice. The probability of getting a 2, 3, 4, 5 or 6 on a single throw is much bigger that the probability of getting a 1, simply because there are more possible outcomes in consideration.

Regarding the mechanism, it all depends in the depth you want to cover, nevertheless, I would advise to read the section of chromosome crossover in Introduction to genetic analysis by Griffith

Not the answer you're looking for? Browse other questions tagged genetic-linkage crossover or ask your own question.

0
How to decide if genes are linked in an unordered mapping problem?
17
Genetic linkage greater than 50 centimorgans
4
Is complete genetic linkage possible?
1
Does crossover happen between chromosomes from grandparents?
4
Can chromosomal crossover undo itself?
1
Help with gene linkage and mapping!
2
How many of the four meiotic daughter chromosomes of a homologous pair can be recombinant via crossover?