Is Brain Eye connections reversed in all animals or just Humans?

I know that Brain Eye connections are reversed in Humans,

Is it true in other animals like Birds,Cephalopods and other creatures?

Are the optic nerves physically connected in reverse or is it internally mapped ?

That's not completely true. In mammals, including humans, the left of an image projects to the right of each of your retinae (this is due to the eye working like a camera obscura), and conversely for the right of an image. So you have 2 eyes, each eye receives mostly identical information but one is on the left and one is on the right of your body. You must somehow recombine this information together in the visual cortex. The way this is done is through the optic chiasma, where roughly half the nerves from the nasal parts (the half closer to the center of your body) of each retina cross. Then connect to a relay called Lateral Geniculate Nucleus and then connect to the brain. Below you can see a drawing from Ramón y Cajal, who first proposed this theory, depicting the process. 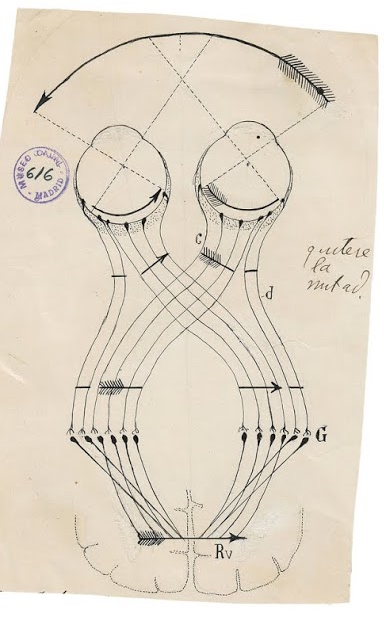 As you can see the points on each retina that receive information from the same parts of the visual field (here represented by the arrow) project to identical locations in the brain. So there is not a complete decussation (anatomical name for a crossing of nerves) like for muscles, but only a partial decussation of about half in humans.

Although y Cajal was the first to explain exactly why it makes sense to have partial decussation, this phenomenon had been known for a very long time. In facts Newton (hardly an anatomist) discusses that phenomenon in his Optiks and suggested that it might be related to the amount of overlap between the 2 eyes. So the more overlap, the higher the amount of partial decussation. This rule, later called Newton-Muller-Gudden law by Walls, seems to be approximately correct for mammals. However, as noted by Walls, there is no evidence of partial decussation in vertebrates other than mammals. Meaning that the decussation is complete (like muscles). In his Optiks Newton concludes that (I'm paraphrasing) if his theory is right then animals with no binocular overlap should have no decussation, which if he is well-informed is true for chameleons. His theory was indeed right but he was misinformed, chameleons have complete decussation.

Finally non-vertebrates do not have "contra-lateral" brains. They do not have this strange property of having each hemisphere mostly connected to the opposite side of their body. Therefore they have no decussation at all.

According to Wikipedia, the nerves cross in all the vertebrates:

In vertebrates with a large overlap of the visual fields of the two eyes, i.e., most mammals and birds, but also amphibians, reptilians such as chameleons, the two optic nerves merge in the optic chiasm. Part of the nerve fibres do not cross the midline, but continue towards the optic tract of the same side. The purpose is so that the part of the visual field that is covered by both eyes is joined so that the processing of binocular depth perception by Stereopsis is enabled.

Not the answer you're looking for? Browse other questions tagged zoology brain vision neuroanatomy animal-psychology or ask your own question.

7
Is there such thing as Animal non-verbal body language?
19
Can parts of a human brain be asleep independently of each other, or vary in the times required for them to fall asleep?
16
Are 2 eyes necessary for 3D vision?
9
Are we naturally born right or left handed or ambidextrous?
76
Do animals exhibit handedness (paw-ness?) preference?
6
Why ambidextrous persons are so rare?
1
Do new neurons divide propotionally?