How does sleep prevent our eyes from drying out?

If we don't sleep for about 16 hours, our eyes start to get dry, and no amount of eye drops helps. You use eye drops and then you're dry 10 minutes later.

However, after you've slept for 8 hours, your eyes can go another 16 or so hours without drying out.

What specifically happens to our eyes during sleep that prevents them from drying out in the next 16 hours after sleep?

Are there any research papers explaining the mechanics of all this?

The reason I am asking about this is in order to understand whether there are any connections between nasal and eye moisturization.

There's a condition called empty nose syndrome, in which people with reduced nasal turbinates suffer from a range of symptoms and a lot of them have to do with their nose getting dry.

Here's a CT scan of a person suffering from empty nose syndrome in one nostril. As you can see, one of their turbinates has been reduced, and the other one looks normal. 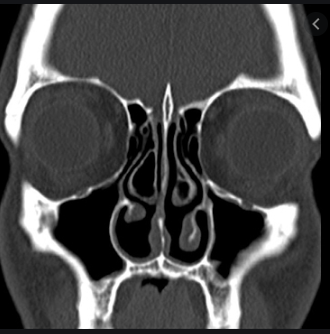 There's something called "the nasal cycle", it's a phenomenon where turbinates swell up on one side at a time in order to "rest", according to wikipedia. Here's a picture illustrating the nasal cycle: 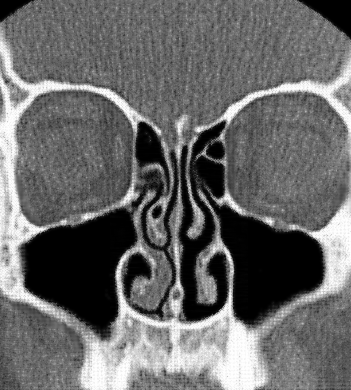 As you can see from the picture, one nostril of this person is mostly closed, due to cavernous tissue being swollen. It is not a disease, it is actually how our nose normally works.

Of course, if you have reduced nasal turbinates, like in the first picture, it is impossible to properly close the nasal airway and expect it to "rest", so that it can start producing moisture again.

Does that mean that our nasal turbinates work in the same way as our eyes do? They have to be closed for a while in order to properly produce moisture?

As I've mentioned before, when your eyes are dry, you can moisturize them, and then they're dry 10 minutes later... It seems to be the same with empty nose syndrome patients. It seems to me that in order to restore normal moisture in the nose we need to have it closed for several hours. I think it is so, but I'd like to first find out why our eyes need to be closed in order to rest. So, I want to find the parallels between nasal and eye moisturization.

9
Human sleep cycles and dream times, what influences the timing and intensity? Sleep history included
5
Why do you need you room dark for melatonin release?
6
Why do our eyes close when we sleep?
19
How do birds deal with their eyes drying out at high speeds?
1
Does our brain contain an innate function about closing only one eye?
15
Telling distance with one eye
0
Why do we need to close eyes to sleep?
11
Deliberately choosing one nostril to breath through
0
How much percent of image does our eyes focus at any instant?