What is the primary cause of death for small animals in urban and suburban areas?

Small birds (sparrows, robins, jays, finches) and mammals (squirrels, rats, opossums, raccoons) are a common sight in many urban and suburban communities with green space. However, I observe carcasses of these animals relatively infrequently.

I imagine that the following are some of the most common causes of death:

I can think of two reasons why we don't see carcasses very often:

Is this plausible? Has this been studied systematically, e.g. in populations of birds with tracking bands?

Cats, windows, and cars appear to be the leading causes of avian (bird) deaths: 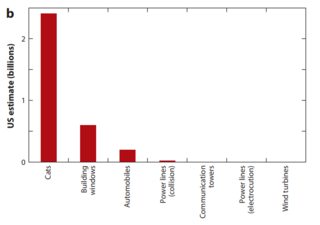 Major sources of anthropogenic bird mortality in the USA [from Fig 2b, Loss et al. (2015)]

Cats and vehicles are likely leading causes of death for many small non-avian animals as well.

DISCALIMER: I was previously only aware of Loss et al.'s work, so the emphasis of my post is on their papers. I did not otherwise search exhaustively for data. Noticeably absent from my post is mention of deaths caused by pest control (trapping and poisoning). I may update this post with more info as I come across it.

It's quite hard to generalize, but this paper seems to suggest anthropogenic mortality increases with body size in mammals. Hence, small mammal mortality would be caused more by predation/competition/diseases than roadkill, imho.

To answer your question why we don't see so many carcasses, I would say that scavenging is very common and i don't see why a 'perfectly fine' protein source should be wasted.

The overwhelming cause of death of small animals ( and deer) that I see is that fearsome predator , the Toyota, Ford, Chevy, etc; AKA roadkill. I am in suburban E.TX. Other than that ,Coopers Hawks are common here and take many small birds. Also barred Owls are common and they are eating something. I think it is politically incorrect to estimate how many birds and bats are killed by wind turbines so those will be difficult numbers to get and they are not located in suburban areas. There are individual studies such as the local college studied the life cycle of Carolina Wrens ; but I doubt you will find anything covering the range you are asking about.

12
Small worm living in some kind of cocoon, what are these animals?
3
Examples of prey predator interactions where density of predator is very low and prey form groups when the predator attacks the prey for food
5
What were the camels' humps good for back in the polar areas?
2
Comparing the amount of domestic animals and wild animals?
2
What are the animals in these pictures?
2
What pigment is responsible for the formation of blue skin color in some animals?
5
What are these animals, and what happened here?