This is the graph of the Michaelis-Menten equation which describes the relationship between reaction rate and substrate concentration: 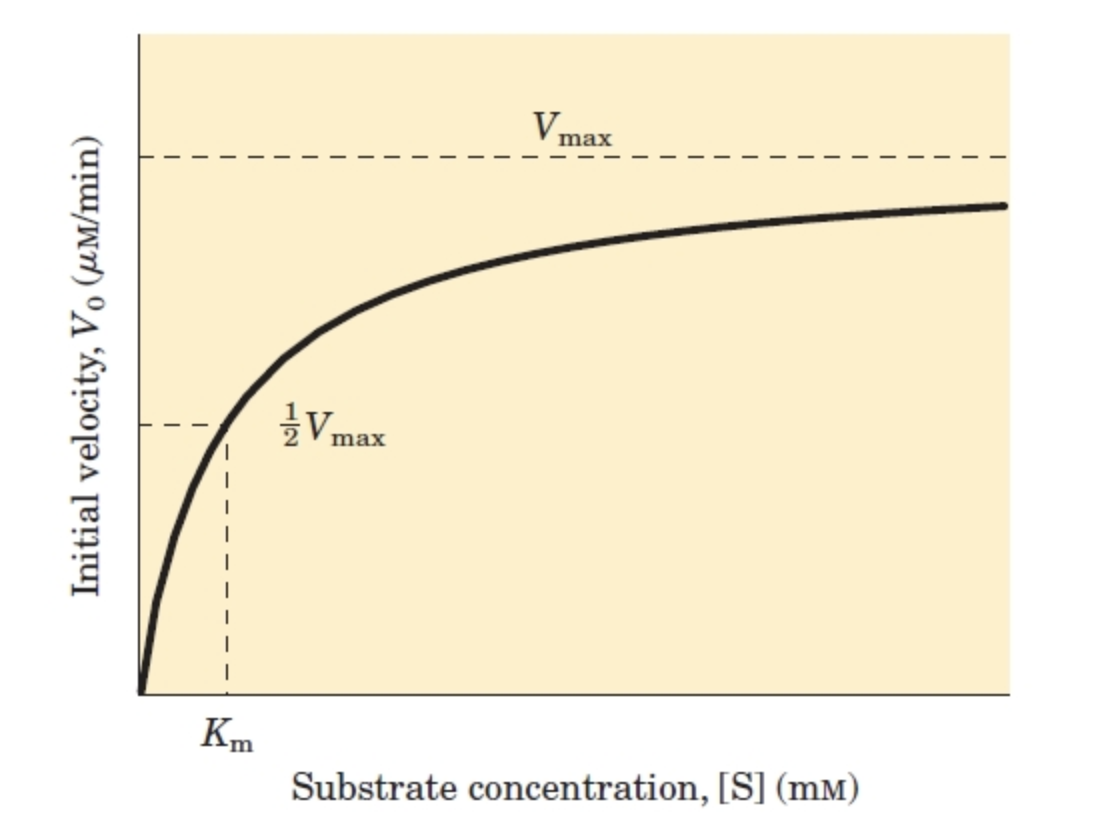 I don't understand why it is hyperbolic. Intuitively, I would think that it would be linear.

Here is my logic for a specific scenario: Let's say enzyme $E$ converts substrate $S$ at a rate of $1 S$ per second. Now let's say we have a container with 1000 enzyme E's. And there is a tube connected to the container that pumps in $10 S$ per second. Logically, in the one second, all 10 substrates should be catalyzed. The rate of reaction would be $10/s$. Now if we increase the pump to 500 substrates per second, you would think that all 500 substrates would be catalyzed in one second, making the rate $500/s$. Thus, a linear relationship.

The formula for rate of enzyme-substrate complex formation is also linear:

What am I missing here? I am looking for a mechanistic explanation (diffusion, dissociation, etc)

Edit: I've done some more thinking and I have a potential explanation. Could it be that, as the concentration of substrate goes up, the probability of a substrate interacting with an unbound enzyme goes down.

This answer is a conceptual explanation, as appears to be the request, rather than a repetition of the derivation of the Michaelis–Menten equation, which I feel inappropriate, partly because it can be found elsewhere, e.g. in Wikipedia and Berg et al.. I appreciate that, like the derivations on which it is based, some of its assumptions do not always hold, or do not hold for all enzymes, and that some with an expert knowledge of enzyme kinetics will feel that it would be better to say nothing than present a conceptual simplification. Although I welcome corrections — I am not an enzymologist — but disagree with this point of view.

The Michaelis–Menten treatment considers the initial velocity of reactions, at which time little product has formed so that it is assumed that the back reaction from product can be ignored, simplifying the situation to a consideration of the rates of three reactions:

A key assumption — the steady state assumption — in Michaelis and Menten’s original derivation is that there is that there is a considerable excess of substrate over enzyme so that the substrate is in instantaneous equilibrium with the ES complex. So, in effect, at a particular concentration of substrate the concentration of ES is constant. The implication in the question that the rate of formation of this complex would determine the reaction rate is incorrect.

The rate of the reaction depends only on the ES concentration and k2, the rate constant for the formation of products, also known as kcat, which is a characteristic of any enzyme and can be thought of as representing its catalytic capability:

What the substrate concentration does affect is the position of equilibrium for the formation of ES from E and S, i.e. how much enzyme is converted into complex. However there is obviously a maximum, approached asymptotically, equivalent to the total enzyme present. This explains† the hyperbolic nature of the curve for reaction rate.

The concentration of substrate needed to reach this saturation (more easily measurable as that to achieve half maximum initial velocity) is another characteristic of the enzyme (and substrate) and can be thought of as reflecting the affinity of the enzyme for substrate (the dissociation constant). The hyperbolic nature of the rate curve is similar to that for binding of small molecules to non-catalytic proteins such as the oxygen-carrier, myoglobin, and hormone receptor proteins.

Just as not all proteins in this latter class (e.g. haemoglobin) show simple hyperbolic binding of their ligand, so not all enzymes (e.g. allosteric enzymes) show hyperbolic kinetics. But that’s another story, which has been told many times on this site.

† I have given a more extensive explanation of the hyperbolic nature of the curve in an answer to a previous question, which I must admit I had forgotten about.

Not the answer you're looking for? Browse other questions tagged biochemistry enzyme-kinetics or ask your own question.

4
Enzyme kinetics at the chemical level

12
How would one calculate the availability of nucleotides to an enzyme?
7
Enzymatic error rate
2
Does the Michaelis-Menten equation take in account the non-enzyme formation of products?
2
Why does uncompetitive inhibition decrease the Michaelis constant?
2
Rate-determining steps in enzyme catalysed reactions
3
What is the meaning behind Kcat / Km?
5
How to derive rate of product formation for an allosterically inhibited enzyme?
4
Definition of a Katal (unit of enzyme activity)
2
Is this experiment to check enzyme reaction rate according to substrate concentration correct?