Steroid hormones: how do they travel through the cytoplasm (not just the blood plasma) if they're hydrophobic?

I get that steroid hormones need hydrophilic plasma protein carriers (eg albumin, TBG) to travel in the plasma because they're not soluble in the plasma. However, I don't see any sources talking about how these hormones can then traverse through the (presumably also hydrophilic) cytoplasm to get to their receptors either in the cytoplasm or nucleoplasm. Anyone have any clarifications on this?

Firstly not all steroid hormones travel inside the cell and regulate the gene expression. Basically there are two pathways- direct and indirect. Steroid hormones are lipid-soluble, which allows them to cross the extracellular membrane to the inside of the cell.

Classical models of steroid action suggest that steroid hormones bind to specific nuclear receptor proteins once inside the cell. Reference

Once inside the cell, a steroid hormone binds with receptor proteins in the cytoplasm. The steroid hormone and its receptor form a complex, called a steroid complex, which moves into the nucleus where it influences the expression of genes. Reference

In the indirect pathway,

The traditional nuclear steroid receptors can also indirectly regulate gene transcription by serving as signal transduction proteins that interact with various signaling pathways in the cytoplasm of a cell. In particular, ER can activate kinases, enzymes that phosphorylate and thereby activate other proteins. This sets in motion a signaling cascade that eventually ends in the nucleus with the induction of gene transcription. Reference 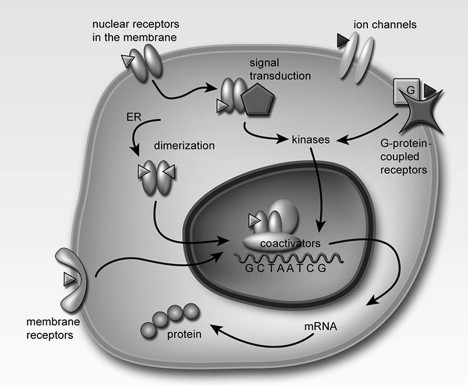 I am not an expert in this area, but found a summary of and illustration from a textbook — Karen Lounsbury, Pharmacology, 2009 — on a Science Direct summary page. 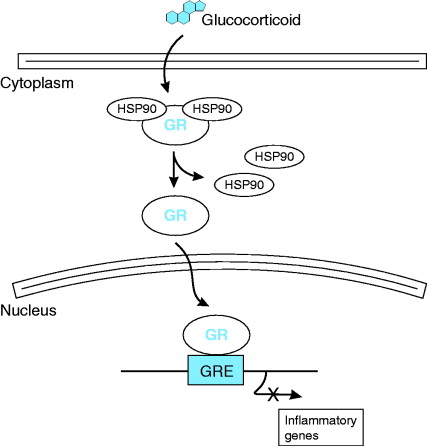 More detail is given in a paper by Bledsoe et al. (2002) in which the structure of the dimeric GR bound to a steroid analogue was determined. To quote from the introduction to that paper:

Like most nuclear receptors, GR is a modular protein that is organized into three major domains: an N-terminal activation function-1 domain (AF-1), a central DNA binding domain (DBD), and a C-terminal ligand binding domain (LBD).

Within the context of the full-length receptor, both the AF-1 function and the DNA binding activity of GR are dependent on hormone binding. In the absence of ligand, GR is retained in the cytoplasm by association with chaperone proteins such as hsp90 and p23, which bind to the LBD (ref). The chaperone activity of the hsp90 complex has been shown to be critical for hormone binding by GR (refs). Hormone binding initiates the release of chaperone proteins from GR, allowing dimerization and translocation of the receptor into the nucleus. In the nucleus, GR binds to DNA promoter elements…

A image of their structure is shown below: 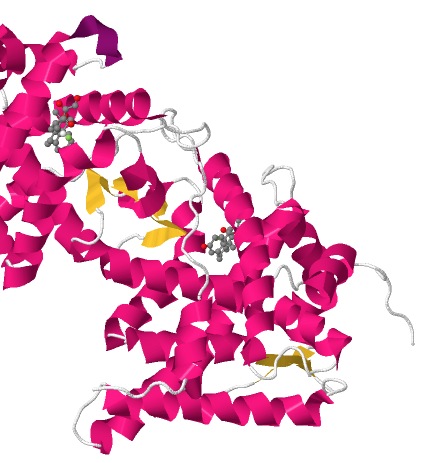 I suspect the issue is mainly one of diffusion distance. Steroid hormones are not that insoluble as they are compact and have multiple oxygen functional groups. Checking predicted log octanol/water partition coefficients on PubChem gives 3-4ish for steroid hormones compared to 6+ for a typical fatty acid, despite the latter having an ionizable headgroup.

These hormones are present in the body at nanomolar concentrations or even lower, and at that concentration, almost anything is soluble. The problem with them being in the plasma at any concentration, though, is that as soon as a molecule would collide with the lipid membrane of a cell in the wall of the vessel, it would tend to stick, and therefore the vessels would act sort of like a chromatography column that drastically reduces the apparent diffusion coefficient and generates steep gradients. While this might actually be desirable for a local mediator like a prostaglandin that has a range of a few cell diameters, it is very undesirable for something like steroid hormones that travel to completely different organs from where they are produced. Therefore, a hydrophilic carrier is essential.

On the scale of the cytoplasm of a single cell, this is not likely to be an issue, especially since there are receptors inside that act as a "sponge" or "sink" to catch and trap molecules that diffuse in.