What is the fate of the typical tree?

Walking through the local established broadleaf forests dominated by oak and tulip poplar (Eastern U.S.), it is common to find patches of young tree saplings, say 10-20 oak or tulip poplar saplings growing in close proximity. The obvious restriction on living space means that probably at most one of these trees will make it to maturity. In fact, judging by the apparent lack of mid-aged trees of these types in the woods, it seems very possible that none of these trees will last much longer. I'm curious: at what point and how would these trees die? The answer might also help me take better care of trees I've planted in my yard.

I can easily speculate about some causes:

But these suggestions don't answer the how or the when. And it's not clear which accounts the biggest impact. Clearly, the above factors didn't prevent the trees from growing in the first place. And the first suggestion (competition for nutrients) puts a limit on their growth but doesn't say per se why a plant would die.

This is a great question.

Without going into too much detail, there is a series of studies done in northeastern US temperate forests (specifically at Great Mountain Forest in Connecticut, USA) on the growth, survival, and dispersal of canopy trees. In this particular community, light appears to be the primary limiting factor. Seedlings and saplings in low-light environments (i.e. stuck under the canopies of mature trees) grow slowly and have poor carbon balance, which makes them susceptible to mortality (probably from pathogens, although the proximal cause of death of seedlings and saplings is rarely known). Early successional tree species (in GMF, white ash/red maple/red and white oak) grow especially slowly, and hence are more likely to die, in low-light conditions; late successional (hemlock and beech) grow slowly even in high light, but are tolerant of slow growth, so are likely to survive until the adult tree above them dies and falls down.

The exact answer to "at what point do these trees die" is a little tricky, but here's a figure from Kobe et al. showing estimated survival probability for different species as a function of light availability (the assumption is of independent mortality probabilities, given light availability, at each time step, so there is no particular stage at which individuals die in the model). 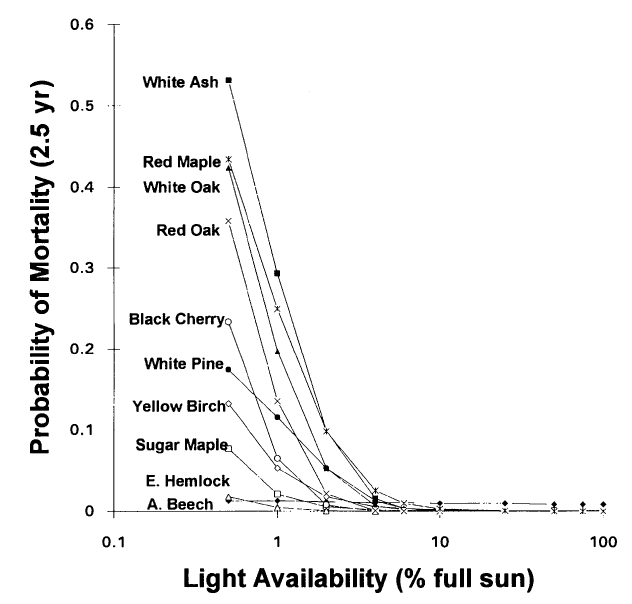 Not the answer you're looking for? Browse other questions tagged botany ecology plant-physiology trees or ask your own question.

14
What is Growing on These Tree Leaves? (Image)
9
What type of tree is this?
2
What is the name of this berry producing tree?
3
What plant/tree is this?
12
What is this small tree?
13
What tree is this?
3
How can tree branches grow upwards against gravity?
7
Does an old growth forest ecosystem produce more oxygen than it consumes?