Glucagon stimulates glycogenolysis and gluconeogenesis, thus increasing the plasma glucose concentration — so that tissues get enough glucose in the fasting state.

However glucagon also inhibits glycolysis. In this case, what is the point of having high blood glucose if it cannot be catabolized?

The apparent paradox is resolved by the fact that not all tissues possess receptors that cause them to respond to glucagon or, more generally, to the same hormone. Where different tissues do respond to the same hormone, the tissue response may differ because of differences between the pathways or particular enzymes within the different tissues. Tissues that use glucose in starvation generally do not have glucagon receptors. In the related situation of response to epinephrine, the glucose utilizing tissue, skeletal muscle, does not contain the particular enzyme isoform that is subject to cyclic AMP-dependent control in liver.

General principles of hormone action in the regulation of metabolism

Metabolism in simple, especially unicellular, organisms is regulated by supply and demand. The mechanisms underlying this are mass action and allosteric activation or inhibition of key enzymes. In more highly developed organisms with differentiated tissues serving specialized functions there are times when this intercellular control must be over-ridden to produce an integrated response to the overall benefit of the organism. This is the rationale for hormonal control. 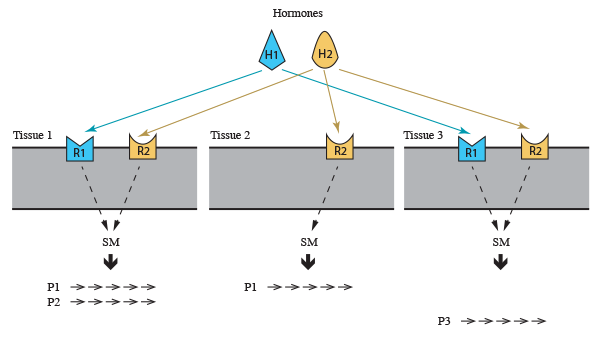 Tissues 1 and 2 (e.g. liver and skeletal muscle) both contain pathway P1 (e.g. glycogen degradation), but only Tissue 1 responds to hormone H1 (e.g. glucagon) because Tissue 2 does not have the receptor R1, for H1. (SM is the second messenger involved in the signalling, e.g. cyclic AMP.)

Tissue 2 (e.g. adipose tissue) does have the receptor for hormone H1, but responds in a different way because it lacks pathways P1 and P2 of Tissue 1, but contains a tissue-specific pathway P3 (e.g. triglyceride breakdown).

Hormone H2 (e.g. epinephrine/adrenalin) affects Tissue 2 (e.g. skeletal muscle) as well as Tissue 1 (and 3), but the response is only partially similar in that although they share pathway P1, Tissue 2 lacks pathway P2 (e.g. gluconeogenesis).

Put simply, glucagon is a signal for starvation. Hence the appropriate integrated response is for those tissues (liver and adipose tissue) that can supply energy sources (glucose and fatty acids, respectively), and those tissues with greatest need for the scarcest resource (brain with its requirement for glucose) are supplied it, while those tissues that can manage with the alternative (fatty acid) are made to use it instead.

The brain has no receptors for glucagon (or insulin), so it can utilize the glucose made available by the liver. (Likewise the erythrocytes.) The main factor preventing other tissues using glucose is that they have insulin-sensitive glucose transporters and the blood concentration of insulin drops in starvation. It is only liver where there is need to make sure that the glucose produced by gluconeogenesis is not glycolyzed.

But doesn’t the paradox remain if we consider epinephrine? 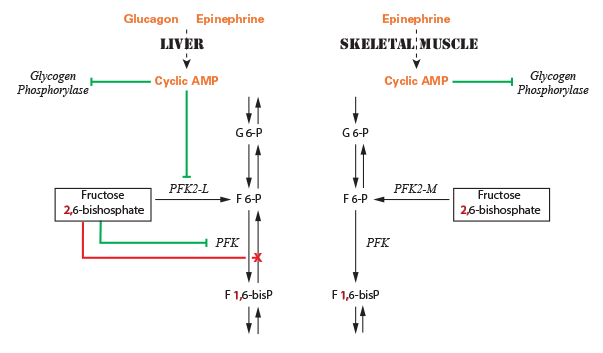 This regulation of phosphofructokinase by fructose 2,6-bisphosphate is described in sections 16.2.2 and 16.4 of Berg et al. (although they seem to have forgotten about skeletal muscle). However as the overall mechanism and details are somewhat complex, I have produced a simplified summary diagram of my own, above, in which the green lines indicate activation, and the red lines inhibition.

Not the answer you're looking for? Browse other questions tagged biochemistry metabolism endocrinology energy-metabolism or ask your own question.

4
Cellular Respiration/Fermentation Problem Leading to Lack of Energy
18
Why is the brain dependent on glucose?
4
What are the differences between how glucagon and cortisol work to increase blood sugar?
13
In a tumor, why hypoxic regions have access to glucose?
1
Why are both glucagon and cortisol released in hypoglycemia?
3
How is the rate of gluconeogenesis controlled in the cell?
5
Why doesn't glucagon promote glycogenolysis in muscle?
2
What happens to glucose taken up by the liver in type 1 diabetes?
4
Why is fructolysis independent of glycolysis?