In a documentary, they were saying that epigenetics changes caused by the environment in an individual can be transferred to the following generations. I have some questions on that:

Generally speaking, epigenetic modifications are not inherited as they are reset during embryogenesis. However, subsequent epigenetic modifications can be acquired during the period of pregnancy, which as a mechanism depends on the epigenetic state before the reset and on the physiological conditions of the mother including nutrition, health, stress, etc.. Obviously drug-intake years before pregnancy can still affect the mothers health-state.

A major barrier to transgenerational epigenetic inheritance is germline reprogramming, during which histone variants and their modifications, as well as small RNAs and DNA methylation, are all reset. In mammals reprogramming occurs both in the germline and in the zygote immediately after fertilization. (Source: Heard & Martienssen 2014 doi: 10.1016/j.cell.2014.02.045)

2: The great potato famine is said to still have epigenetic effects, generations later. 3.: Epigenetic changes cannot directly "become permanent" as genetic changes, although hypothetically speaking, epigenetic states can lead to viability of certain mutations that would otherwise be lethal and can therefore in theory influence evolution.

Epigenetic changes can only be passed directly onto the next generation when they occur in the cells that proliferate into the gametic cells (ovum and sperm cells).

There is some research with rat models that show the inheritance of epigenetic changes over several generations, so it´s possible.

The main protein family that participate in epigenetic regulation are the histone deacetylases (HDACs) and the histone acetyltransferases (HATs), which can modify proteins that bind to the DNA and thus control the expression and activity of genes, and these proteins can be influenced by environmental changes.

(Several types of cancer are thought to be caused/affected by the activity of HDACs that shut down tumor suppressor genes, and there are many medical studies focusing on chemotherapeutically inhibiting their function in cancer patients.)

Question 1: how many generations.

In one of the first description of transgenerational epigenetic inheritance, before any of the mechanisms were worked out, Woltereck found (my translation, caveat emptor) that he could find influences on both children and grandchildren of starvation in Daphnia (Figure 1). 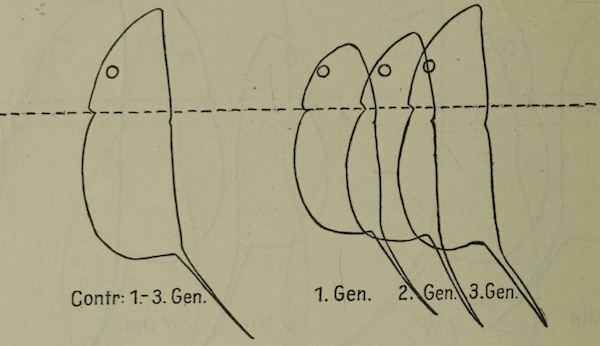 How common such epigenetic changes are is a huge subject of debate. Nutrition appears to be the big one- see also the Barker hypothesis in humans, especially in re: the Dutch Hunger Winter.

Not the answer you're looking for? Browse other questions tagged genetics evolution epigenetics or ask your own question.

2
Can epigenetic changes affect reproductive success?
11
How does a tiny spider interpret/cope with gravity?
0
Why does this genetic pedigree show an autosomal dominant allele at one generation but not another?
2
DNA methylation and the validity of the definition of epigenetics
1
How does permanently modifying human DNA work? And how does it impact procreation?