I was reading on mammary gland development, and I found this (1):

As a girl approaches her teen years, the first visible signs of breast development begin. When the ovaries start to produce and release (secrete) estrogen, fat in the connective tissue starts to collect. This causes the breasts to enlarge. The duct system also starts to grow.

Wikipedia has an article about the duct system(2):

The development of the mammary gland occurs mainly after birth. During puberty, tubule formation is coupled with branching morphogenesis which establishes the basic arboreal network of ducts emanating from the nipple.

It goes on to say, developmentally, mammary gland epithelium is constantly produced and maintained by rare epithelial cells.

In the end, I understood that the mammary alveoli (containing milk) are not formed during this. During pregnancy, the ductal systems undergo rapid proliferation and form alveolar structures within the branches to be used for milk production.

And from where is the milk produced? (Just for some more detail)

After delivery, lactation occurs within the mammary gland; lactation involves the secretion of milk by the luminal cells in the alveoli. Contraction of the myoepithelial cells surrounding the alveoli will cause the milk to be ejected through the ducts and into the nipple for the nursing infant.

An interesting case is one of neonatal milk.(3)

It is thought to be caused by a combination of the effects of maternal hormones before birth, prolactin, and growth hormone passed through breastfeeding and the postnatal pituitary and thyroid hormone surge in the infant.

There is a comprehensive 2012 review of the development of the mammary gland by Macias and Hinck which covers the poster’s question(s). I shall try to summarize the points they make regarding the development of alveoli and their role in milk secretion, ‘borrowing’ two of their illustrations to do so.

Development of mammary gland and role of hormones 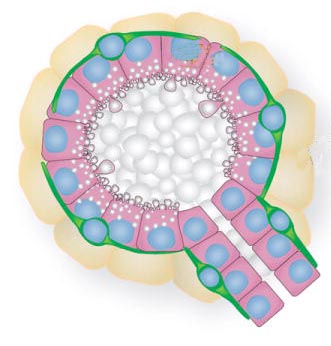 Oxytocin does not affect the development of the mammary gland (as is made clear in the reference cited by the poster). After parturition it is released from the pituitary in response to the nervous stimulus of suckling and causes the myoepithelial cells around the alveoli to contract causing ejection of the milk.

It should be mentioned that the alveolar cells apoptose on weaning, being replaced by adipocytes. However new alveolar can develop from undifferentiated epithelial cells during a subsequent pregnancy.

Regarding the poster’s specific questions

Q2 I know milk formation primary requires prolactin, oxytocin and indirectly, oestrogen.(4) So does this process wait till pregnancy?(If yes, then the lobes and branches are devoid of any lumen, and they remain empty until pregnancy, which seems skeptical to me.)
A2 The poster’s statements are not completely accurate. Milk formation does not require oestrogen, and oxytocin only affects it in so far as failure to remove milk causes involution. The ducts are indeed devoid of the alveolar lumen until pregnancy, and return to this state on weaning. It is not clear why you are sceptical that this is so. The mammary gland development after puberty prepares the ductal network, but alveolar cells only arise when they are required. Pregnancy is quite long enough for them to develop.

Q3 Can lactation occur without alveoli formation?
A3 I would think not, although the situation regarding neonatal milk secretion (witch’s milk) is unclear because of the obvious ethical barriers to its study in humans. The increase in breast nodule size is suggestive of development. So my opinion is primarily based on argument. The formation of milk requires cells with a specific pattern of gene expression, i.e. of milk proteins and metabolic enzymes that are required for fat formation. It also needs a structure and organization that allows the milk to be secreted into a duct. That is what an alveolus is. Therefore I would imagine that in these circumstances the rudimentary mammary ducts of a new-born infant develop alveoli under maternal hormonal influence.

This is a topic I worked on for my doctorate, but have not had contact with for many, many years. It was interesting reading the review — how the technology has changed! I also find it curious that the review makes no mention of corticosterone, as one of the earliest systems for observing alveolar development in vitro was in explants of mammary gland from pregnant mice cultured in defined medium with insulin, prolactin and corticosterone. Perhaps the corticosterone was mimicking what is now known to be the effect of progesterone in vivo.

Not the answer you're looking for? Browse other questions tagged human-biology milk or ask your own question.

8
What are the clotting factors' effect on avascular necrosis development?
18
What causes the development of antibiotic-resistant strains of bacteria?
7
Fetal development, gastrulation and embryonic disc
6
Enlargement of thyroid gland
4
Does adding milk to cereal make it harder for our body to absorb the vitamins and minerals from the cereal?
3
Development of vitreous humor
0
When does lactation occur?
3
Are there testosterone receptors in female mammary tissue?