How does the light-independent stage of photosynthesis get H+ ions?

From what I understand from my grade 11 biology:

During the light-dependent stage of photosynthesis, water molecules split, producing hydrogen and oxygen atoms. The oxygen atoms are basically “waste products” — used by mitochondria for respiration after being inhaled. These H+ ions are then taken by a hydrogen carrier (i.e. NADP+) to form NADPH (which is necessary for the light-independent stage). Where do these H+ ions suddenly just come from?

From what I’ve understood so far, the H+ ions are now “in” the NADPH.

I’m confused as to how in the light-independent stage, the carbon dioxide (CO2 molecules) can combine with the H+ ions to form glucose. I thought that these H+ ions had already got “converted” to form NADPH? Or is it something like only some of the H+ ions are necessary for NADP+ to form NADPH?

The question shows confusion about the purpose of the splitting of water in photosynthesis. Quoting from Berg et al., in the light reactions of photosynthesis

“Light is absorbed and the energy is used to drive electrons from water to generate NADPH and to drive protons across a membrane. These protons return through ATP synthase to make ATP.”

The useful product of splitting water is energy.

There is no problem in the provision of hydrogen ions for biochemical reactions as such — they are available from the dissociation of water. 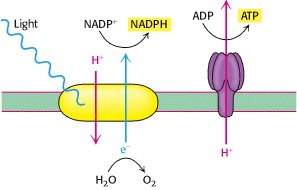 The diagram above, summarizing the light reactions may be helpful, although it conceals detail and introduces the complexity of energy generation. It shows the (thalkaloid) membrane separating the location of the reduction of NADP+ (outside) from where water is split (inside).

It is important to realize that the energy is used to reduce NAD to NADPH, that NADPH can be regarded as a special type of ‘high-energy compound’ — not a general one like ATP, but one that can specifically drive the reduction of carbon backbones needed in synthesis.

The misapprehension is that there the hydrogen ions for the above reaction are those produced in the splitting of water, or that there is in general any problem in obtaining hydrogen ions for biochemical reactions. Biology exists in an aqueous environment, and water dissociates into hydrogen and hydroxyl ions.

So hydrogen ions are irrelevant to the reduction reactions involved in the conversion of carbon dioxide to carbohydrates in the light-independent reactions of photosynthesis (they are actually produced in NADPH reductions.). It is NADPH that is supplying the hydrogen component of the carbohydrates.

The diagram also brings in a complexity that needs a book chapter to explain: the hydrogen ion gradient generated between the inside and outside of the thalkaloid space provides the energy to phosphorylate ADP to ATP. The ATP is relevant to the light-independent reactions of photosynthesis in that it ultimately provides the energy for formation of the carbon–carbon bonds.

1
anabolism in plants
11
Quinone A, Quinone B, Ubiquinone, Plastoquinone: whats the difference?
2
Redox potentials in photosynthesis light dependent stage
15
Can plants produce oxygen at night (without light)?
0
Where do the 2 electrons and H⁺ go when NADPH is turned into NADP⁺ during the Calvin Cycle?
1
During non-cyclic photophosphorylation, how does NADP+ become NADPH?