Can viruses be deformed?

Viruses are created in their fully-formed state and do not grow. But one thing has been bugging me lately: can a virus be deformed, e.g. in order to fit into an opening slightly smaller than itself? Say you were to apply a force to the virus perpendicular to the smaller hole; would the virus merely break, or is it possible for it to deform and retain its structure on the other side?

Most viruses of human concern are "enveloped", that is, they are surrounded by a lipid membrane. This membrane is usually what determines the shape of the outer layer, and is intrinsically flexible, so most human viruses would be able to deform a bit to fit through a hole. Additionally, the size of individual enveloped virus particles tends to vary quite a bit as seen in this image from a previous answer: 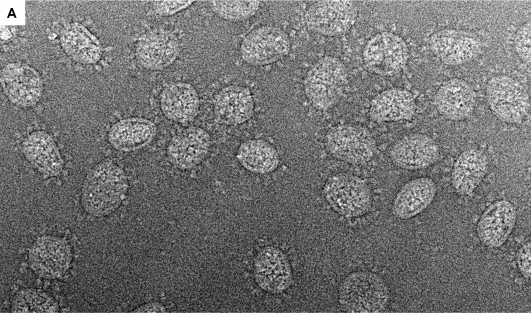 You can also see that biologically active proteins stick out of the membrane. These are likely to break off if the virion experiences any significant forces. My experience with coronaviruses has been that even relatively mild purification procedures remove the spikes from most particles, let alone forcing them to deform through a hole. So, while they might pass through a small hole without rupturing, it's likely their ability to infect cells would be greatly reduced.

In the case of non-enveloped viruses such as adenoviruses or picornaviruses, their outer layer is composed of many copies of a "capsid protein", linked together according to quasi-equivalence. The capsid proteins need to join together over a range of angles, so they should be able to tolerate some flexing. Again, though, any extra proteins that stick out for biological functions (such as the adenovirus' fibers) will likely be damaged or detached, which would remove the virus' ability to infect cells.

Not the answer you're looking for? Browse other questions tagged molecular-biology cell-biology microbiology virology biophysics or ask your own question.

7
Can we attack viruses by attaching proteins and such to their shells?
20
Can Biologists identify all viruses?
13
Can viruses be toxic?
2
Can bacteria be reservoirs for animal viruses?
10
Can viruses survive Super saturated salt solution?
2
Can viruses grow?