How is it thought that phosphine is synthesized by living organisms on Earth?

The recent (Sept. 2020) report of “Phosphine gas in the cloud decks of Venus” states that phosphine (PH3) is only known to occur on Earth due to anaerobic life. Quoting from a report in the New York Times:

But scientists have yet to explain how Earth microbes make it. “There’s not a lot of understanding of where it’s coming from, how it forms, things like that,” said Matthew Pasek, a geoscientist at the University of South Florida in Tampa. “We’ve seen it associated with where microbes are at, but we have not seen a microbe do it, which is a subtle difference, but an important one.”

What are the current hypotheses about how phosphine is formed?

The background to phosphine production on Earth can be found in a review entitled “Natural Products Containing ‘Rare’ Organophosphorus Functional Groups” by Petkowski et al. in Molecules 24, 866 (2019). The four authors are also co-authors of the Nature Astronomy paper. They state (my emphasis):

The detailed biosynthetic pathway for microbial phosphine production is currently unknown. For detailed discussion of the biological production in the environment, its biochemistry, and atmospheric chemistry see three recent papers by Bains, Sousa-Silva and colleagues [482,494,495].

These three papers are from the authors, one of which I followed up:

The abstract to this includes (my emphasis):

In this paper we show through thermodynamic calculations that, in specific environments, the combined action of phosphate reducing and phosphite disproportionating bacteria can produce phosphine. Phosphate-reducing bacteria can capture energy from the reduction of phosphate to phosphite through coupling phosphate reduction to NADH oxidation. Our hypothesis describes how the phosphate chemistry in an environmental niche is coupled to phosphite generation in ground water, which in turn is coupled to the phosphine production in water and atmosphere, driven by a specific microbial ecology.

The paper itself is not of the ‘author-pays’ type, so you may need institutional access to read it. There is a graphical summary provided, however, which summarizes the hypothesis: 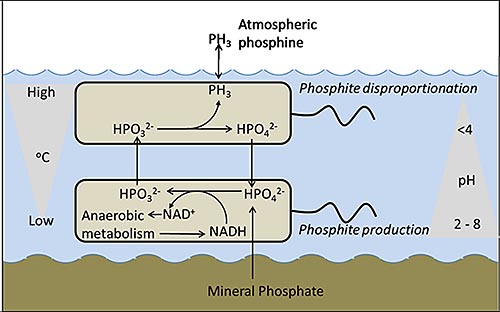 The paper consists of detailed thermodynamic arguments for the scheme suggested at the particular temperature, pH and anaerobic environment of marshes and swamps. Under these conditions, the authors postulate that the purpose of posphine production is to gain energy†. The analogy would be with the production of NADH as in anaerobic glycolysis to gain energy, but needing to be reoxidized to NAD+ to allow this to continue. The reduction of phosphate to do this would be analogous to the reduction of pyruvate to lactate or to ethanol. Like ethanol, phosphine would be a by-product of no value to the organism.

However the possible role envisaged for phosphine production in Venusian clouds is different. In the Supplementary Information for the Nature Astrobiology paper, there is the following:

Initial modelling based on terrestrial biochemistry suggests that biochemical reduction of phosphate to phosphine is thermodynamically feasible under Venus cloud conditions. Biological phosphine production on Venus is likely to be energy requiring. However, life can make substantial energy investment into compounds that provide important biological functionality. There are many potential useful biological functions including signaling, defense, or metal capture for which phosphine has useful properties, so endergonic biosynthesis cannot be ruled out.

The suggestion here is that phosphine is a useful product, synthesized at an energetic cost.

The only biochemical connection between the two would be that if, as appears likely, life on Earth can produce phosphine (by biochemical pathways that remain to be discovered), then these same biochemical processes would be candidates for phosphine production by life on Venus if the authors are correct in arguing that (at least known) non-biological candidates have been excluded. The question does not ask for opinions on the latter, nor would I presume to present those that I hold.

† The thermodynamic approach involves calculation of Gibbs Free Energy changes (ΔG) for reactions. Often on this site discussing standard biochemistry we (or at least I) talk in terms of standard free energies — ΔG˚ (or ΔG˚′ for normal cellular conditions). However the actual value of ΔG for a reaction is influenced by temperature and the concentration of reactants (which will include hydrogen ions), so that the ΔG calculated for terrestrial marshes and the like is likely to differ from that in Venusian clouds.

Detection and role of phoshine in phosphorus cycle was first discussed in 19881. They examined phosphorus cycle in open-air sewage treatment plants where they discovered a gas releasing from sediments of 1-2 meter deep water which was found to be phosphine. They calculated that 5 g of phosphine was released from 2000 m3 of sewage. They also further proposed that:

Under laboratory conditions, it was also demonstrated that phosphine is released by bacterial reduction from a medium containing inorganic phosphorus. The phosphorus content of the medium decreases by nearly one half.

This bacterial reduction of phosphine was further explained in a 2000 paper2(Also see ref. 3):

A microbial basis for bioreductive generation of phosphine is proposed, which could account at least in part for the presence of this toxic gas in natural anaerobic environments and in sewage and landfill gases. Phosphine generation under anaerobic growth conditions was dependent upon both the culture inoculum source (animal faeces) and enrichment culture conditions. Phosphine was detected in headspace gases from mixed cultures under conditions promoting fermentative growth of mixed acid and butyric acid bacteria, either in the presence or absence of methane generation. Monoseptic cultures of certain mixed acid fermentors (Escherichia coli, Salmonella gallinarum, and Salmonella arizonae) and solvent fermentors (Clostridium sporogenes, Clostridium acetobutyricum and Clostridium cochliarium) also generated phosphine. Generation of phosphine by these bacteria could explain the apparent correlation between methanogenesis and the formation of phosphine in nature.

But this phosphine reduction was found to be thermodynamically unfavorable and hence a proper biochemical reduction pathway has not been identified4:

Thermodynamic considerations indicate that it is very improbable that the reduction of phosphate to phosphine is endergonic. Therefore the generation of phosphine cannot be compared with sulphidogenesis and methanogenesis. There seems to be a link between the existence of highly reactive gaseous phosphorus compounds and increased levels of metal corrosion. The reactive compounds could be formed by micro-organisms or they are liberated from phosphorus-containing impurities in the iron by the action of bacterial metabolites. The biochemical pathways responsible for the production of gaseous phosphorus compounds have not been characterized yet.

But then in a 2014 paper, a possible redox reduction method has been proposed5:

No other common reducing agent can produce phosphine at the concentration at which it is observed in nature, as reduction from phosphate is energetically unfeasible unless phosphite or hypophosphite are present in the environment (important members in phosphorus cycle). Phosphite and hypophosphite generate phosphine and phosphate from disproportionation reactions:

Conclusion: Phosphine should be/is considered to be an integral member in phosphorus biochemical cycle as it is found to be formed from the reduction of phosphites/hypophophosphites (important members in PBC). About 10% of the phosphorus produced in the atmosphere from PBC is PH3. Direct production of phosphine gas occurs in some specialized, local conditions like deep-marine environment where PH3 concentration was found to be 0.01 ng/m3 - 100 ng/m3.

PBC is itself an important process for sustaining life on Earth. It synthesize life-sustaining molecules important for the biosphere. Since, it is found in Venus, we can hypothesize anaerobic life on Venus although it hasn't been confirmed yet. In future, we might see life on Venus.

Not the answer you're looking for? Browse other questions tagged biochemistry anaerobic-respiration astrobiology or ask your own question.

2
What do different fermentation products have in common?
-1
How does the energy we get from food transform into mechanical motion at the cellular level?

0
Why do living organisms replicate itself or procreate
4
How does blue white screening work in selecting E coli that have taken up a plasmid vector?
2
How is it decided that one drug is better than others by X times?
10
Why is it thought that silicon based lifeforms never flourished on Earth?
4
Is studying chemical and physical properties of chemical substances that make up organisms really a task of molecular biology?