COVID-19 deaths by year of birth?

Are there (global, country, etc.) data of COVID-19 deaths (or hospitalization) by year of birth? I was able to found them only by "age group", the meaning of this being usually an interval of 5 to 15 years, but I'm interested in smaller intervals.

Why I am interested? We know that the severity of this illness increases with age, and in fact increases a lot with ages around 70. If this increasing is more o less locally constant (that is, the first derivetive does not vary much in any interval of a few years) or at least the second derivative is more o less locally constant, we can think that maybe age on its own is a factor risk. But if there is a rapid increasing in one, two or three (consecutive) years and then a smaller slope (that is, a sort of "jump"), it is possible that there are (instead/also) other factors: maybe an exposition of this aged people to something during their lives that younger people don't lived, or some other thing that we don't know yet. So we need to know with more detail ages of hospitalization, deaths, or other sign of severity.

Data are usually binned in broad age groups partly because that's all the detail that's useful in some context, and because access to more detailed data often involves access to strongly controlled, personally identifiable information.

This preprint (full disclosure: I'm a co-author) gives information in 2-year bins for COVID in Ontario, e.g. this graph of the fraction of known infections (KI) hospitalized, and fraction of hospitalizations that resulted in survival, by (2-year) age group.

It looks pretty smooth, although if you squinted hard you might be able to convince yourself there were some breakpoints, e.g. between [60-61] and [62-63] in hospitalization or between [62-63] and [64-65] in survival (although I doubt these impressions would stand up to a formal statistical analysis ...) 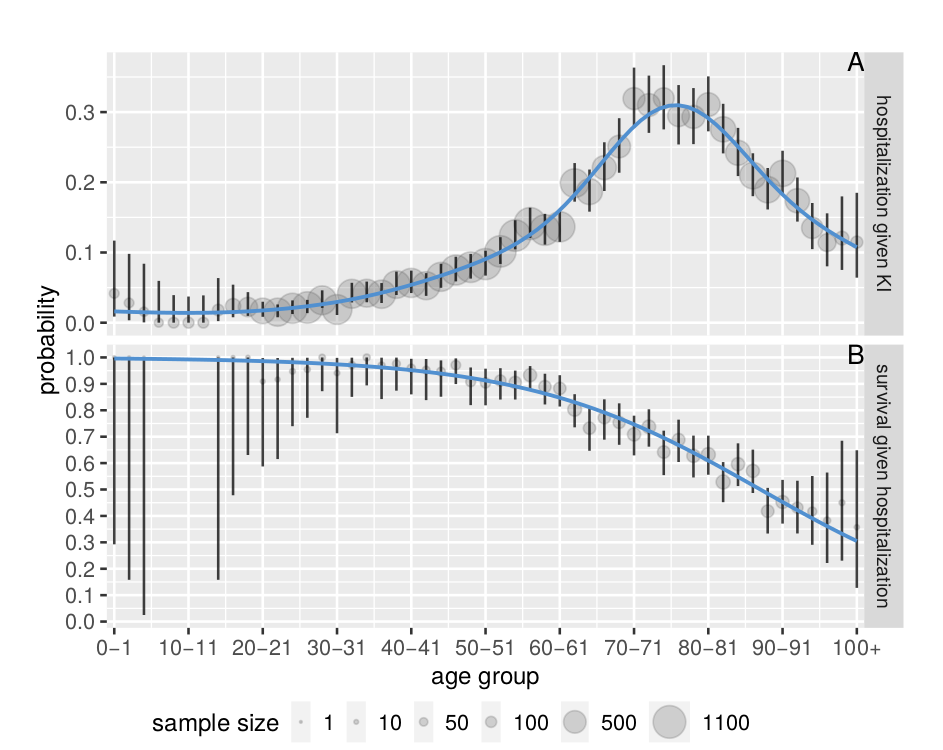 0
Is COVID-19 more deadly than swine flu?
0
If the covid-19 appeared once, could it reappear anytime?
0
Are specific primers or detectors, or both, used in COVID-19 tests?
1
What does (deaths / (resolved + deaths)) describe in an emerging epidemic?
3
Is the coronavirus getting less dangerous?
0
What is the consensus in the scientific community over COVID-19's mode of transmission?
3
The probability meaning of Covid variants