Are the transitions between the different brain frequencies states easy to see on an EEG?

Are the transitions between the different brain frequencies states: Gamma to Beta, Beta to Alpha, Theta to Delta, etc. easy to distinguish on an EEG? How quickly can the brain transition between any of these states?

Delta/theta/alpha/beta/gamma are not different states and so there are no changes "between" them. These are terms used to label different bands of the frequency spectrum. Every EEG has energy in all of these bands. Brain state can change/be measured by the relative changes in different bands (either relative to each other, or in absolute power change over time), but there is always some energy in every band. 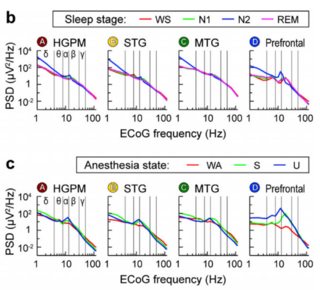 WS and WA refer to "wake" in the sleep and anesthesia experiments respectively; N1, N2, and REM are stages of sleep. S refers to sedated under anesthesia - subjects can still respond to commands, and U refers to unresponsive under anesthesia. These are actually not from EEG but from electrocorticography where the electrodes are placed directly on the brain, sometimes called iEEG, but there are a lot of similarities with EEG.

You can see that in all brain states, there is energy across all the frequency bands (identified with Greek letters), but there are changes with state. For example, delta has more power during N2 sleep across the brain. A trained eye could also easily pick this up in the time-domain EEG signal, but it's much easier to convert to the frequency domain like in this figure.

You'll notice that the energy decreases with increasing frequency. This is normal, and is typical of natural frequency spectra with certain properties, see Pink Noise; it's rare to ever have less power in the delta band than any other band, for example. You will also see that for the most part the spectra are gradually changing: there are few peaks in the spectrum, and it can be a bit misleading to refer to energy in a specific band or to compare between bands when there is no peak there. Some exceptions are that there is typically a peak in the alpha band for humans, especially with eyes closed. Hippocampus tends to generate rhythms in the theta band, and rodents have very large hippocampus relative to the rest of cortex, so you'll often see a theta peak in rodents especially during locomotion.

Lastly, these EEG differences are probably not the best way to discriminate between different brain states. There are lots of other measures that seem to do better. In the rest of the paper that I've taken this figure from, my colleagues and I use a specific measure called the weighted phase lag index which does a much better job at discriminating between putative conscious and unconscious states.

Not the answer you're looking for? Browse other questions tagged brain eeg or ask your own question.

7
What is the difference between different brain regions
1
Alpha wave frequency variance in EEG of single subject over period of a few hours?
5
Brain wave and motor movement correlation
1
Excitability of neurons
1
Does neural oscillation happen at the same frequency in all parts of the brain simultaneously?
3
Does the brain store information and personality traits in different areas?
0
What is the exact frequency of Delta brain waves during Slow Wave NREM Sleep?
2
Origin of different brainwaves
0
Differences between comatosed states and brain death