I would like to identify this succulent. It has been bought from store (in central Europe), I don't know where is it originally from. It was about 8cm high and white. Its leaves were covered with something like very soft fur.

Unfortunately, the plant is already dead. I have only this one blurry photo of it. 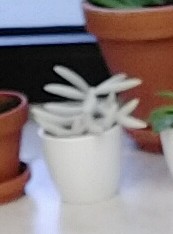 I've tried some automatic plant identification apps, but with no success.

EDIT: Even partial answer would be helpful. If you have an idea in which family it could belong, I could make my search easier.

Browse other questions tagged species-identification botany or ask your own question.