If due to some reasons a small portion of our neurons die, how does our body remake them?

There are various reasons such as intake of neurotoxins, and possibly traumatic injuries, that can cause neurons to die.

After several hundreds, or thousands of our neurons die, how does our body remakes them?

Evolution set us humans up to not regenerate our neurons on the whole, which is a pity since we can regenerate our liver cells, so it's not an impossible feat. If neurons die because you drank too much, banged your head, or just because they got old, they are gone. If this death is accelerated like in Alzheimer's disease, you can literally see holes in the brain autopsy. That said, we now know that in a few exceptional areas of the brain, neurons do regenerate. It's not many cells but it's something. The two areas known to date are the dentate gyrus of the hippocampus (DG below) and the subventricular zone of the lateral ventricles (LV). See the green zones in the image below. 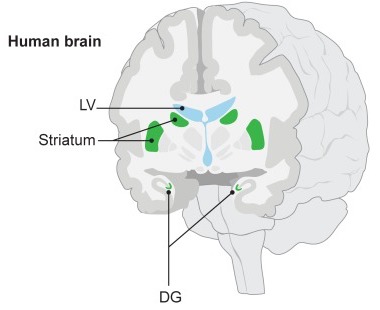 In those areas, like elsewhere in the body, new cells are made from stem cells, that is infant-like cells that have the potential to become many cell types. If we could only understand why some cells regenerate and others do not, we might be able to promote this. Alas, our current understanding is woefully incomplete. We'll need more research # # # before we can dream of regenerating our neurons.

Disclaimer: I'm not an expert, but my recent reading on this topic is fresh in memory, so I'm typing up something of an answer.

The body does not remake any individual cells that die. In case of cells that regenerate, their place is simply occupied by cells which are newly born, or travel from elsewhere. Every individual cell is unique, with its own copy of DNA with its own unique epigenetic information, and unique (but typically similar to other cells) exact biochemical makeup. Once a cell dies, it can not be remade.

Neurons are also pretty special among cells - their function is extremely complex, and in adulthood, new neurons are only born in some specific areas - in the brain, the main exception being the hippocampus.

Majority of learning in the human brain happens as a consequence of what neurons we have being constantly reshaped, both physically - with dendrites, spines, synaptic terminals being constantly created, pruned, their molecular makeup changed, their gene expression regulated up and down.

Unfortunately, if a neuron dies, it is gone for good, and it will not be replaced. Instead, depending on area and degree of damage, other neurons will often pick up the slack, changing function and enabling the brain to re-learn some of the function it lost. In fact, the process of neurons learning to perform different function than they originally did is common in the human brain, e.g. the size of areas processing functions of individual fingers in a musician's brain will vary based on the instrument(s) they play and their experience with it.

That said, the situation is not as grim as it looks. A few thousand neurons, in most areas of the brain... isn't much, and probably won't impair your cognition much, and neurons aren't all that fragile either - it's possible for them to starve and lose function, becoming dysfunctional, instead of outright dying, which they can in many cases recover from. People are often capable of recovering almost completely from lighter brain damage, and cases of impressive recovery from more severe damage are also not unknown.

Neuroregeneration capability is rather limited, and patients that go through the trauma that you speak of usually require life-long assistance[1]. One treatment that has come to light in the past two years uses stem cell delivery to the brain[2]. When a cell dies, if it is replaced, there are stem cells that do it (google mesenchymal or skin stem cells and you will find that system). Damage like drinking doesn't kill cells, it just hinders them (by maybe effecting their protein production), and cells can rejuvenate or heal themselves and replace those dysfunctional proteins with an autophagic process[3, 4].

Overall, I am confused about your question. The body has limited capacity to replace neurons due to the way that this very specialized cell type develops with the body (among other reasons) and it comes down to there not being a stem cell close by, ready to undergo mitosis and differentiate. So your question assumes that the human brain has the great ability to regenerate these cells. Next time there is an assumption in the question you are asking it may be helpful to provide a citation or background information with citations.

16
Can humans transdermally absorb minerals from ocean water, and if so how much?
1
How does the body respond to blood donation; are there any possible risks?
3
Do all different types of neurons serve different roles?
1
How does our body produce new antibodies?
6
Why some tissues like small intestine epithelium are able to be replaced so often, yet they are not one of the most common cancers?
5
Do brain cells regenerate in the adult brain?
0
Neurons competing for survival
4
How does the human body extract energy from ethanol?
3
How does coffee cause calcium loss in our body?