Is water movement across cell membrane purely diffusive or it always requires channels?

I am particularly interested in understanding the movement of water across cell membranes and then answering the above query.

Water across cell membranes occurs due to osmosis( which is based on a concentration gradient). so water diffuses through the cell membrane. sometimes water channels called aquaporins can be found. https://www.anaesthesiamcq.com/FluidBook/fl1_2.php
https://www.sciencedirect.com/topics/pharmacology-toxicology-and-pharmaceutical-science/aquaporin

As @Roshelle Perera points out, the textbook reason for differential solute and water movement in different parts of the LoH is osmolarity, which is nicely explained in this wikipedia article.

Coming to an interesting point, about the movement of water across cell membranes through aquaporins, this is helpful:{1}

The discovery of aquaporin membrane water channels by Agre and co-workers (6, 7, 191, 192) answered a long-standing biophysical question of how water crosses biological membranes specifically, and provided insight, at the molecular level, into the fundamental physiology of water balance and the pathophysiology of water balance disorders. Out of at least 10 aquaporin isoforms, at least 7 are known to be present in the kidney at distinct sites along the nephron and collecting duct.

The journal further elaborates on these APQ's and their function in detail, do read it if you are interested, but the following diagram sums it up pretty well, so I am just going to expand on this: 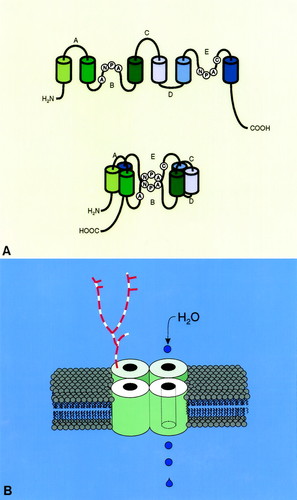 A: schematic representation of the structural organization of aquaporin-1 (AQP1) monomers in the membrane (top and bottom).

B: AQP1 is a multisubunit oligomer that is organized as a tetrameric assembly of four identical polypeptide subunits with a large glycan attached to only one.

The direcrion of flow of water, again, depends on osmolarity.

...Only inward water flow (swelling) was examined, but it was predicted that the direction of water flow through AQP1 is determined by the orientation of the osmotic gradient. Consistent with this, it was later demonstrated that AQP1-expressing oocytes swell in hyposmolar buffers but shrink in hyperosmolar buffers.

Please note that the linked journal is brilliantly detailed, so there are several points that I have skimmed over. I recommend reading it if you have time.

Not the answer you're looking for? Browse other questions tagged cell-biology physiology human-physiology or ask your own question.

4
How can a polar molecule pass through polar channels of proteins in the cell membrane?
3
What is the significance of the phospholipid bilayer being two-dimensional?
4
How is the renal osmotic gradient maintained even though the blood osmolarity changes?