How can Chronic myeloid Leukaemic drugs reduce the production of the Philadelphia genotype?

How can Chronic Myeloid Leukaemic drugs (Tyrosine kinase inhibitors, e.g. imatinib, etc.) that act by inhibiting bind of ATP to the active site of the BCR-ABL1 protein actually reduce the prevalence of the Philadelphia chromosome? (For example, optimal response to TKIs in 3 months would be Ph+ <35% and/or BCR-ABL1 <10%.) What I am actually asking is how a drug that targets the result of the oncogene (the BCR-ABL1 protein) can have an effect on the source (ie. genotype of the cells), as CML is a clonal haematopoietic stem cell disorder?

The key is that TKIs, such as Imatinib, are a therapy rather than a cure

Per Wikipedia, Imatinib acts as a competitive inhibitor of the otherwise constitutively-active BCR-ABL fusion protein, rather than the fusion gene. By binding the kinase domain, BCR-ABL is unable to phosphorylate downstream effectors that result in unchecked proliferation. As long as a patient continues to take Imatinib, BCR-ABL activity should be blocked. 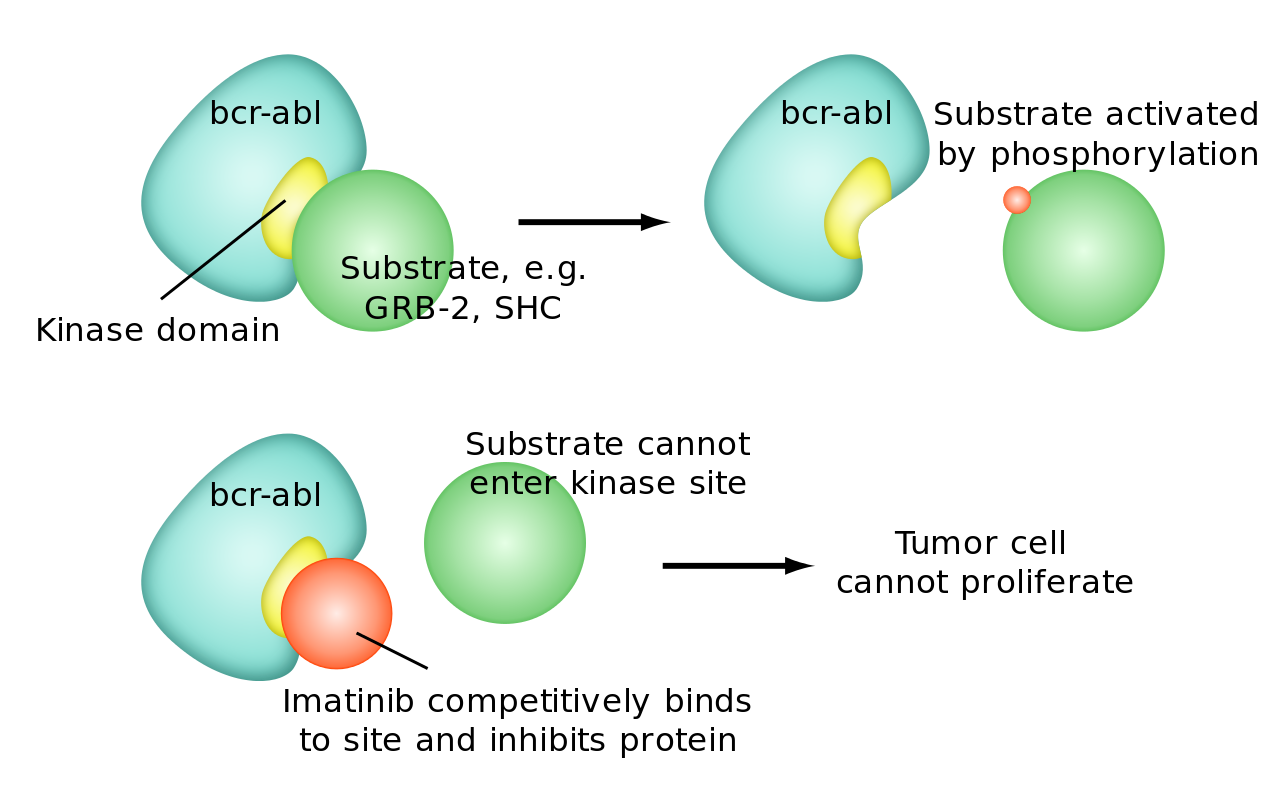 In the past few years (i.e, long after imatinib's discovery) there has been a lot of research into exactly how hematopoetic stem cells, which reside in the marrow and create leukemic blasts, work. Most HSCs remain in a quiescent state, but it's not particularly well-known how frequently they turn over. Recent CML studies have shown that after ~5 years, a large portion of CML patients can safely taper the the drug. Presumably this is related to HSC turnover, but frankly as a leukemia molecular biologist rather than a physician, I'm not the best font of clinical knowledge.

Not the answer you're looking for? Browse other questions tagged genetics molecular-biology cell-biology proteins cancer or ask your own question.

6
Why do we think chronic inflammation can cause cancer?
5
How can one create images like those in the PDB ‘Molecule of the month’?
4
How to determine genotype?
0
How is receptor production (recycling) regulated?
0
Using exogenous genes to reduce the set of essential amino acids?
1
Are these 2 procedures to fight cancer (cancer "vaccine", and cancer drugs which can attack all tumours) related?
0
How much of the genotype-phenotype map do we understand in HIV?
1
Evolution: Can the genotype frequencies change, but the allele frequencies remain constant?
6
Does the term 'protein expression' refer to the production of proteins only or also their regulation?