Is it necessary to conduct a power analysis before beginning an experiment?

I know that power analysis is the statistically valid way to ensure you use the correct numer of samples or repeats in an experiment. But I have never seen any biologist actually conduct a power analysis. Mostly, researchers seems to use a rule of thumb (three technical, three biological replicates is a common one).

Should I be doing a power analysis each time I design an experiment, or can I just use one of the common biology rules of thumb? If not, what are the consequences for the validity of my results? And is there a situation where I will be required to use power analysis, which makes it advantageous to get used to doing it now?

You've already gotten a decent answer to this, but I'll provide my own thoughts on the subject.

sjcockell is partially correct. To do power analysis, you at least need to have some notion of the effect measure you're likely to see. And these are indeed just estimations of what you'll see. But in nearly all circumstances, you'll likely have some ideas already. Are there similar experiments you can draw from? Your own pilot studies? A "feel" born of experience in your particular system?

It's also trivially easy to calculate power under a number of difference scenarios, to ensure your experiment is sufficiently powered if things go considerably worse than expected. For example, in a study I once did the power calculations for, we weren't sure what the ratio of exposed to unexposed subjects would be. So I ran it over a large range: 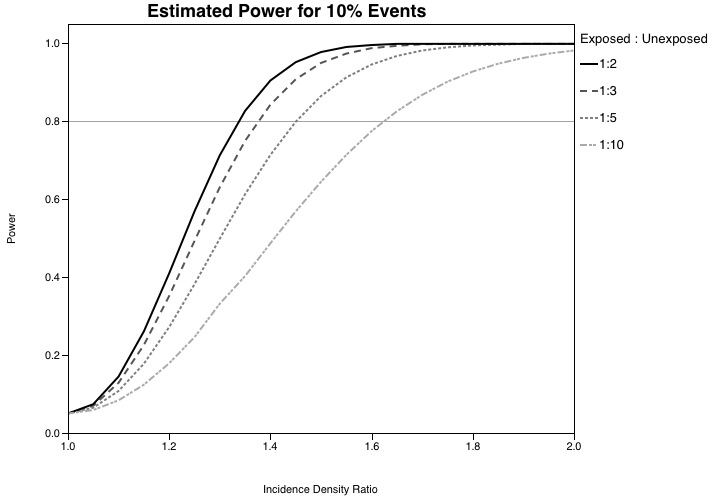 Which left me with the confidence that even if I was in my "worst case" scenario, I'd have reasonably good power at realistic effect sizes.

That's the true strength of power calculations. They'll tell you things about your study. What you need. What doesn't matter. Whether or not before you spend time and money pursuing an idea if you have a reasonable chance at success. Sit down with someone, take an hour or two (at most for a simple experiment) and do it right. Or ask CrossValidated for advice.

In order to calculate power, you need to know the variance of the data being collected. You can only estimate this prior to actually gathering the data itself, so any a priori power calculation is itself just an estimate.

This is why sometimes you will see small studies being conducted as pilot studies (for example, see (1)), which enable variance to be more accurately determined, and a true power calculation to be performed.

Knowing the power will enable you to state the probability that the effects you are observing are real (at a given sensitivity). The better idea you can get of this False Discovery Rate, the more solid the conclusions you can draw will be (so it is almost always a good idea to calculate it, but it is not always a feasible thing to do).

Due to my own woeful ignorance on the subject, I have been reading up on statistical methods recently. From what (little) I understand, the real answer to this question is:

Yes, but only if you are doing Neyman-Pearson hypothesis testing

Absolutely not, if you are using Fisher p-values

That is, the question isn't formulated correctly, because power analysis is only valid under one statistical framework (Neyman-Pearson). And you are probably not using that framework.

In my experience, most experimental biologists use Fisher's p-value, which gives the probability of the data (or more extreme data) assuming that the null hypothesis is true. Under Fisher's framework, among other drawbacks, there is no quantitative measure of the test's power. However, it has the benefit that it allows scientists to do something close to what we would like to do--that is to draw conclusions from evidence obtained in individual experiments.

The Neyman-Pearson framework does included the idea of a test's power, because you must formulate an alternative hypothesis as well as desired alpha and beta error rates before starting your experiment. However, it mostly denies us the ability to make inferences from individual experiments, and for that reason appears less suited to experimental science. To quote from Goodman (see below), under Neyman-Pearson, "we must abandon our ability to measure evidence, or judge truth, in an individual experiment."

There is no clear right frequentist framework, although what is clear is that you cannot mix Fisher and Neyman-Pearson. Finally, although it doesn't really address your question directly, it seems wrong not to mention Bayesian methods as an alternative to these two frequentist frameworks, which comes with its own baggage.

Further reading from people that understand this much better than me:

Not the answer you're looking for? Browse other questions tagged statistics experimental-design or ask your own question.

2
What is an efficient way to spike 10-50 cells to a culture
3
What are the factors to consider when determining the sample size for a given study?