I live in South India ,and among the many species of ants in and around our house, some of them except the weaver ants build the typical small ant hills in the garden. 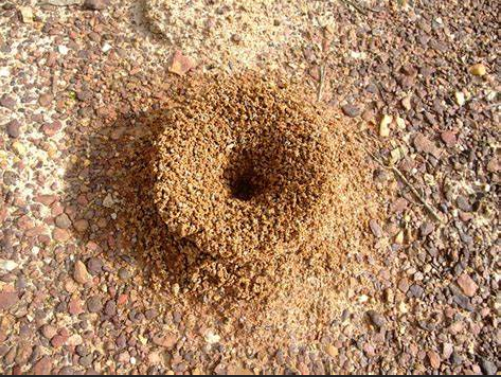 I have examined the coarse sand like grains on the top of the ant hill. They are somehow modified and don't mix with normal soil or disintegrate in water.The region I live in has red soil.

A quick search on ant hills brings up information from here

The ant hill is a byproduct of ants building their colony. As ants dig their long and winding tunnels beneath the ground, the excess dirt and debris is carried out and placed near the colony entrance, creating the ant hill. At the top of the hill, there will be a small hole that serves as the entrance and exit to the colony. Typically, an ant hill will be made from a combination of dirt, small rocks, pine needles, and whatever other materials were left over after the ants have dug their colony.

Other sites also state same facts on the composition of ant hills, but nowhere I can find any secretion or something which changes the properties of the ant hill soil.

8
What happens to an ant colony when the queen dies?
2
By what method do ants dissect and hold soil
23
How do burrowing animals get enough oxygen?
6
Do ants use something similar to the honey bee "waggle dance" to instruct the rest of the colony where to find a food source?
4
What is the standard method for measuring soil and substrate acidity
9
Small jumping bugs inside Swiss flat
2
What is carbon in the soil?
9
Why do earthworms surface after a rain?