Is life in the open ocean homogenously spread?

Obviously around land masses or in shallow water where reefs and coral may grow, life is diverse and numerous. But how spread out is sea life in the open ocean (for example, half-way between Hawaii and California) where there is no land mass or shallow depths for hundreds or thousands of miles?

Does life exist in clusters with large swaths of oceanic desert in between or is it relatively homogenously spread?

This is sort of a partial answer, but here is a map using chloryphyl density to map the global distribution of marine life. As you would expect, most is clustered around costal regions, but you can also see some pretty distinct zones in open ocean, with more primary production apparently in the northern and southern latitudes. Not sure how much this map projection distorts apparent distances, but it should help give you an idea. 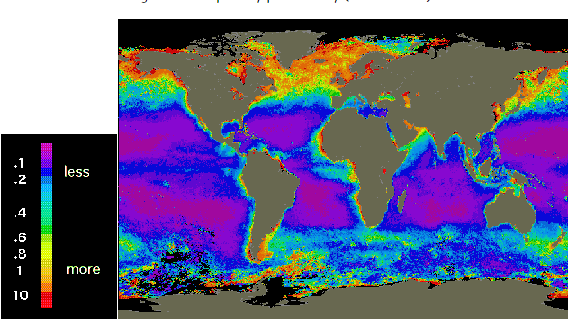 Here's where I found this map.

And here's one of the links they references, which looks to have some more resources to explore.

Not the answer you're looking for? Browse other questions tagged marine-biology or ask your own question.

20
Do marine deep sea life forms exhibit circadian rhythms? If so, what entrains them?
8
Effect of extremely hard water on marine life?
3
What would be the impact of depositing limestone in the oceans (to reverse acidification) on ocean life forms and biodiversity?
4
Species identification - greenish blue ocean worm (nudibranch?) in Perhentian Islands, Malaysia
4
Have I identified this species correctly? Weird ocean blob