Why is the SARS-CoV-2 target receptor ACE2 not endocytosed when bound physiologically?

For instance, from https://www.nature.com/articles/cr200815 I know what receptor-mediated endocytosis is. However, I just cannot imagine just the opposite, in my wording: non-receptor mediated (endocytosis). My guess is that the virus contacts a receptor and gets endocytosed, however I imagine the receptor as being left behind, on the membrane, where it remains, it's just some anchor. In other words: does there exist some mechanism that uses a receptor for attaching the virus like a rod to get - not the spike but - the virus membrane close to the membrane of the cell so fusion of membranes might happen. Would that be endocytosis, fusion of membranes?

Some idea to get into it deeper, so to speak: ACE2 is special as it's an enzyme - and it does not have, alternatively: does not need any communication channel behind the membrane as it does not trigger anything inside the cell. Thus, ACE2 does not appear as a receptor leading to signaling, and tentatively I suggest that signaling might lie in the endocytosis of the receptor, in a broader sense of signaling (maybe earlier staged in evolution: no G-proteins, no cascade...) and in contrast to just blindly harbouring an enzmye on the membrane. Edited, see comments: it's not blindly that ACE2 has been "expressed", I realized that the very expression of proteins - be it on surface or not or not at all - can be seen as signaling.

Interestingly, especially Sars-Cov-2's spike is known to be cleaved by other enzymes on the cell's membrane (furine). Edited: Another exciting perspective: ACE2 which is a cleaving enzyme isn't used by the virus in its cleaving function, it looks like some exchange of "enzyme", not receptor. This is interesting in the context of CoV-2 mutations which add to specifity. Compare newer comment below: what normal interaction is "perturbed" by binding of CoV-2 to ACE2? My point is that there is no signaling cascade after ACE2 which could be perturbed - however, there is "competitive binding", as it is known with any other receptor, so a new way to look at CoV-ACE2 is to see a longer lasting state of blocking the receptor, shielding it away from its natural ligand (sorry, edited: such kind of poetrick is very familiar "competitive binding") Angiotensin II, and I couldn't tell if such kind of non use might trigger endocytosis, haven't heard of any "De-Overexpression", i.e. endocytosis of receptors that are not bound or used physiologically - which makes sense, as competive binding molecules are homologues, identical, how could one cell tell the difference? Aha, it's the "intrinsic effect" (you call it?) in contrast to just blocking - which in case of ACEII does not exist! Nothing behind ACE2 as some follow up cascade.) To me it's a possibility that the getting used of Furine triggers endocytosis of ACE2 (I don't think it does, End of editing).

That should bring up some other question - importance of receptor expression (that is discussed in the context of blood pressure medication, i.e. ACE antagonists as medication). Now, in context of this question, the expression as such just as the opposite, the endocytosis (which physiologically does not seem to be undertaken) might be seen as a way of regulation. So, why is ACE2 endocytosed, and why isn't it...

...however, it is also possible that SARS-CoV-2 can enter cells independently of ACE2 when viral loads are high.

This might be explained by SARS-CoV-2 not searching for a receptor that is endocytosed to facilitate entry by receptor-mediated endocytoses but attaches to any antigen that fits its spike, which speaks in favour of my assumption that it is the closeness of membranes. This is quite exciting as it's on the side of the victim - as I postulated - if ACE2 is prone or not to be endocytosed as the opposite of overexpression i.e. diminishing ACE2 is the way (to go away the way to go :-))

So, the question is

(Clarithin-mediated) endocytosis of "intended" ligands only occurs mediated by ligand-specific cargo adaptor proteins or by AP2 itself (which is a sort of "universal glue", but AP2 only binds specific motifs.)

As cargo is selected and bound by AP2 or by cargo-specific adaptor proteins, the clathrin coat has to be assembled.

The presence of different cargo adaptor proteins, including the ubiquitous protein AP2 and many accessory cargo adaptor proteins, ensures that specific receptors are recruited to the protein interaction network. For example, ARH is a specific adaptor for low-density lipoprotein receptors (LDLRs), Numb binds Notch, stonin binds synaptotagmin, HRB binds SNARE proteins, and ß-arrestin and Dishevelled bind G protein-coupled receptors (GPCRs). These accessory cargo adaptor proteins bind directly to the core AP2 adaptor appendage domains and therefore do not compete with direct cargo binding. They may be expressed by distinct cell types to confer tissue specificity; for example, stonins are found in neurons and thereby help to recruit the calcium sensor synaptotagmin specifically into synaptic vesicles. Other tissues, such as the liver, have cargo adaptor proteins, such as ARH, that bind to LDLR to allow its incorporation into clathrin-coated vesicles. Furthermore, different accessory adaptor proteins can be expressed in different tissues, thus allowing a whole range of proteins to be recruited into a clathrin-coated vesicle. In addition to conferring specificity, the presence of distinct cargo adaptor proteins ensures that, when one receptor (for example, TfR) is present in high levels on the membrane, this does not block the uptake of non-cognate cargo (in this case, EGF or LDL). Therefore, even if a receptor is present on the membrane with low representation, it can still be endocytosed.

There is basically no such cargo adaptor protein for angiotensin II (that was identified). Nor is it clear why there should be one since ACE2 acts as a "knife" cleaving angiotensin II. Also, clathrin-coated vesicles take on the order of minutes to form (see previous ref), while the catalytic cleavage that ACE2 does almost certainly takes a lot less time; although I could not find a precise figure for the latter, it's probably on the order of milliseconds given how other reactions in that class take.

If you wonder how viruses manage to get themselves endocytosed... that's a long story, which I won't try to fully cover here, especially since it's rather poorly studied (Fields Virology 6th ed. manages to completely gloss over it), but the basic idea is that they are much bigger than a usual physiological ligand, which turns the process into a different game:

Although well-known endocytic receptors such as transferrin and LDL receptors occur in the list, the majority of virus receptors are not directly involved in the uptake of physiological ligands. By inducing clustering, viruses can generate a receptor-rich membrane microdomain that differs from the rest of the plasma membrane in protein and lipid composition (English and Hammer 2005; Lozach et al. 2011b).

I couldn't even find a detailed mechanism study for this on (any) enveloped viruses, but there is one on adenovirus (which is nonenveloped) on how it might trigger endocytosis, basically by providing its own polymerization promoters on its capsid, as summarized in a review:

Nemerow and coworkers demonstrated that the interaction between adenovirus pentons (protein complexes which together with the hexons make up the adenovirus capsid) and integrins activates phosphatidylinositol 3-kinase (PI(3)K), which in turn activates Rac and Cdc42, resulting in the polymerization of actin- and clathrin-mediated endocytosis of the virus. Activation of many different signaling pathways has since been described with the involvement of a variety of factors, including serine/threonine, tyrosine, and PI kinases; phosphatases; and a variety of small GTPases (including Arf, Rab, and Rho family members) (Greber, 2002, Pelkmans et al., 2005).

It's not really clear if all viruses come with polymerization promoters like that because even inorganic nanoparticles seem to be internalized; e.g.

Analogous to viruses, colloidal nanoparticles have been shown to be internalized through different cellular pathways in a size-dependent manner. For spherical nanoparticles, Rejman et al. related particle size and internalization pathways in the absence of specific cell receptor interactions: particles smaller than 200 nm in diameter are generally internalized by CME while particles larger than 500 nm enter cells via caveolae-mediated structures. For polystyrene particles in particular, a size of 100 nm is more efficiently internalized by CME in comparison to 50 or >200 nm. Interestingly, for gold nanoparticles, the preferred diameter for clathrin internalization is 50 nm. For both viruses and nanoparticles, the molecular and biophysical determinants driving these size-dependent entry mechanisms are still uncertain. This gap of knowledge is mainly related to the lack of a method to study virus-cell early interactions, which are highly unpredictable events that take place in a extremely narrow time-window (1–2 min).

But surely promoters would speed up the process. Furthermore, it was shown that at least for the reovirus (which is also nonevenloped), inhibiting its usual binding to its target receptor did little to change its ability to recruit clathrin-mediated endocytosis, if the virus was otherwise pressed against the cell:

JAM-A is a critical receptor for reovirus infection. [...] Nevertheless, the number of clathrin recruitment events colocalizing with virus particles was similar in untreated cells compared to cells treated with the JAM-A neutralizing antibody. [...] these results strongly suggest that the recurrent recruitment of clathrin on immobilized viruses is JAM-A receptor independent.

Furthermore, SARS-CoV-2 doesn't actually bind to the catalytic domain of ACE2 (i.e. the part that cleaves angiotensin II) but somewhere above it, as crudely illustrated in this diagram: 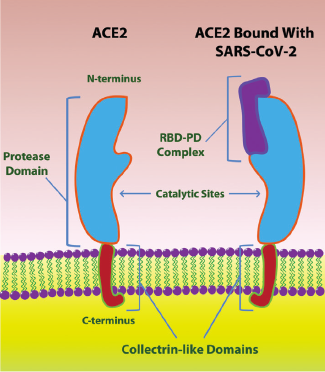 Finally, regarding SARS-CoV-2 entry, the most recent research I found suggests that TMPRSS2 is the main pathway by which SARS-CoV-2 releases its payload into the cells it usually infects at plasma membrane level, with endocytosis being a secondary mechanism. (This actually explains why hydroxychloroquine [alone] works poorly in vivo in treating Covid-19.) It is a a bit unusual for coronaviruses to prefer release at the cell membrane, but not completely unheard of, e.g. Fields Virology mentions that several strains of the mouse hepatitis virus also do this and even that:

For one strain of MHV (MHV-4), as few as three amino acid changes in the heptad repeat region of S2 switches the virus from plasma membrane fusion to acid pH-dependent fusion [i.e. to prefer endocytosis].

And if that's not enough, the same coronavirus can use multiple endocytic pathways, e.g. PEDV has been studied in that regard:

To clarify the specific endocytic pathways, systematic research methods were used and showed that PEDV enters cells via the clathrin- and caveolae-mediated endocytosis pathways [...]. In addition, lipid raft extraction assay showed that PEDV can also enter cells through lipid raft-mediated endocytosis [...] but the utilization efficiency of each endocytic pathway varied depending on the different [virus] genotypes and types of cells.

Not the answer you're looking for? Browse other questions tagged immunology coronavirus receptor or ask your own question.

1
Using decoy proteins to treat viral illness
2
Can Covid-19 (similarly to HIV) infect T-Cells?
1
Questions regarding serial passage of virus through animals arising from the paper The proximal origin of SARS-CoV-2
6
What is the lipid membrane of SARS-CoV-2 made of?
2
Are the y-axis values informative when performing biolayer interferometry?
8
Does SARS-CoV-2 kill its host cell or not?