Why do cucurbits produce so much fluid when their stems are cut?

When carrying out some germination tests on species in the Cucurbitaceae, I notice that young plants of this family produce a lot of clear fluid when they are dissected. Most plants I dissect do not produce any fluid, even ones which appear to be turgid and have large cells. Why do cucurbits do this, and what's the fluid?

Members of the Cucurbitaceae family (squash, pumpkin, cucumber, melon etc.) are unique* in that they possess two distinct phloems, see figure below. The fascicular phloem (FP) is the main transport conduit, and more closely resembles the phloems of other plant families. Its role is to transport photosynthates and other nutrients (Turgeon & Oparka, 2010).The extra fascicular phloem (EFP), is more minor and has an atypical composition for a phloem. Although we have been aware of this dual phloem system for centuries (Crafts, 1932; Fischer, 1883, 1884, 1886), it is often ignored!!

The minor strands of EFP have been found to be the source of the extreme bleeding observed in cucurbits (Zhang et al., 2010). However this excessive bleeding has meant that cucurbits are a very popular model plant for phloem composition studies, since copious amounts of phloem contents are easily accessible. This is problematic since we now know that the exudate originates from the atypical EFP strands, making it a poor model (maybe is isn't even a phloem at all)!

The reason that the EFP does not block upon wounding is that it lacks blocking and sealing mechanisms (such as P proteins and pectins), which usually exist in order to protect the phloem from damage or disease, and to prevent the loss of vital metabolites. The fact that these are not present in EFP, along with the fact that EFP is rich in defensive proteins (Walz et al., 2004), may suggest a defensive role for this secondary phloem. Its anatomical placement around the vital vascular transport conduits supports this idea. 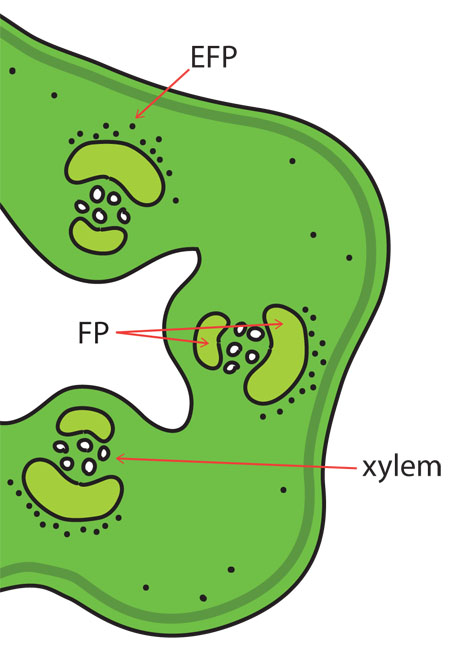 *No others are known, but could definitely exist.

Looking through some papers it is not clear to me that botanists actually know why this should be the case, and I am sure that you are more qualified than me to comment on this Richard! However, there's some discussion of this in Zhang et al. (2012).

These authors argue that the "exudate from curcubits is copious" because of physiological adaptations due to their growth habit - i.e. they are vines and as such often require the structural support of other plants. Vines compensate for a lack of a supporting stem structure by having xylem vessels that are wider than comparable freestanding species and "high hydraulic conductivity" (which is a measure of how readily water will flow through pores - in the case of curcubits - very readily). Similarly, sieve tubes and sieve pores are very wide compared to species in other families. Since these sieve tubes have such a large cross-section, they do not readily self-seal.

11
Why are there so many medicinal plants?
5
Why are neutral [sterile] female flowers present in inflorescences when they are reproductively incompatible?
12
Why are fruits so large compared to their seeds?
9
Why are plants referred to by their Latin species names, and not by their popular names?
2
Why is pith of Cucurbits hollow when mature?
6
Why are plants unable to take up Phosphorus directly in their organic form like Phytic Acid?
5
Why does photosynthesis occur even in blue light when the photocentres are activated in red light