I was looking at the oxoglutarate dehydrogenase complex and saw the reaction mechanism for its E1-TPP mechanism, which results in the formation of a stabilized carbanion intermediate.

The mechanism begins with a protonation, but since the "goal" of the enzyme is to form the carbanion intermediate, it seems to me that the decarboxylation is the key part of the reaction. So why is this a dehydrogenase-catalyzed reaction and not a decarboxylase-catalyzed one?

I'm new to citric acid cycle and I'm judging this question based on my previous knowledge of biochemistry and organic chemistry. I've looked into several protein databases and shockingly it seems oxoglutarate dehydrogenase is the correct name for it.( See :Uniprot , PDB 1 , PDB 2 ) Although the nomenclature of biological enzymes sometimes does not sound right to me , I believe this naming is appropriate for this molecule. First take a look at these definitions:

Dehydrogenase : an enzyme that catalyses the removal of hydrogen atoms from a particular molecule, particularly in the electron transport chain reactions of cell respiration in conjunction with the coenzymes NAD and FAD.

Dehydrogenase (also called DH or DHase in the literature) is an enzyme belonging to the group of oxidoreductases that oxidizes a substrate by reducing an electron acceptor, usually NAD+/NADP+ or a flavin coenzyme such as FAD or FMN.

Decarboxylation is a chemical reaction that removes a carboxyl group and releases carbon dioxide (CO2). Usually, decarboxylation refers to a reaction of carboxylic acids, removing a carbon atom from a carbon chain

Here is why the usage of "decarboxylase" in the name of the enzyme is incorrect :

Recall amylase (Amylase-Wiki) . That enzyme consumes amylose as substrate and produces maltose out of it. It sounds weird if one calls it "Demaltase" just because it gives out maltose. Instead, in this case , consumption of amylose plays a more important role in digestion.

According to above definitions , the "goal" here is simply the movement of H+ and the electron to FAD (to generate FADH2) and then to NAD+ (To generate NADH), Not the removal of CO2. That is just a by-product resulting from the mechanism. see :Reaction

Here's why the usage of "dehydrogenase" in the name of the enzyme is correct : Take a look at this 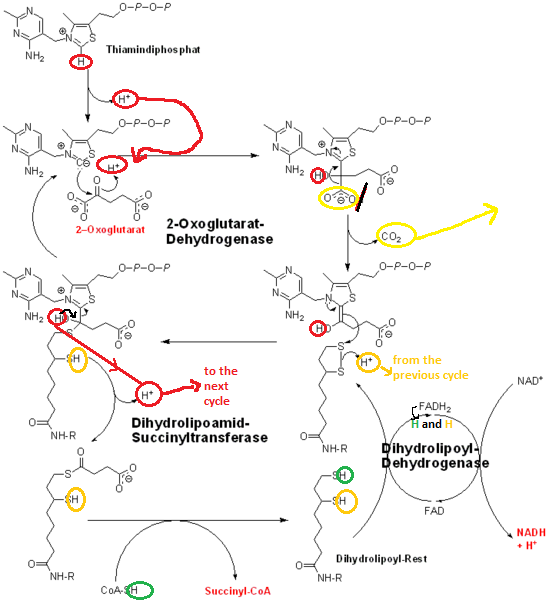 . The whole process involves the movement of one proton from thiamindiphosphate and one from CoA-SH and also 2 electrons from two S-H bonds (I've traced the Hydrogens for you. Trace the electrons yourself ! :) ) Recall the concepts of carbonyl functional group from organic chemistry. One way to perform any reactions on carbonyls is to use an acidic catalysis which is most of the times H+ resulted from H2SO4 or HCl.Take a look at this. Also see Morrison-boyd organic chemistry or Vollhardt's This H+ Activates the carbonyl functional group , allowing it to participate in nucleophilic substitution more easily. The addition of H+ to Carbonyl oxygen is reversible and thus it is important to optimize this equilibrium. The indicated enzyme operates on this equilibruim to gain the maximum yeild. Plus it may induce TPP to lose a H+ . These two processes (the removal of H+ from TPP and the addition of H+ to oxogultarate ) can not be done with the help of the enzyme , hence the name Dehydrogenase for the enzyme.

Not the answer you're looking for? Browse other questions tagged biochemistry molecular-biology enzymes or ask your own question.

12
Why are restriction enzymes not frozen?
1
Why is succinate dehydrogenase attached to the inner mitochondrial membrane?
7
Why is it often the case that an enzyme is favorable only towards one direction of a reaction and not both directions?
1
Why is the formation of an enzyme-substrate complex endergonic (induced fit model)?
5
Why isn't acetyl-coA an entry point for gluconeogenesis?
1
How can some residues in the active site of enzymes be protonated with a pKa < 7?
0
Glucose 6-phosphate dehydrogenase: reaction mechanism
1
Why doesn't enzyme reaction rate rise linearly with substrate concentration?
2
Basis of enzyme nomenclature — pyruvate dehydrogenase