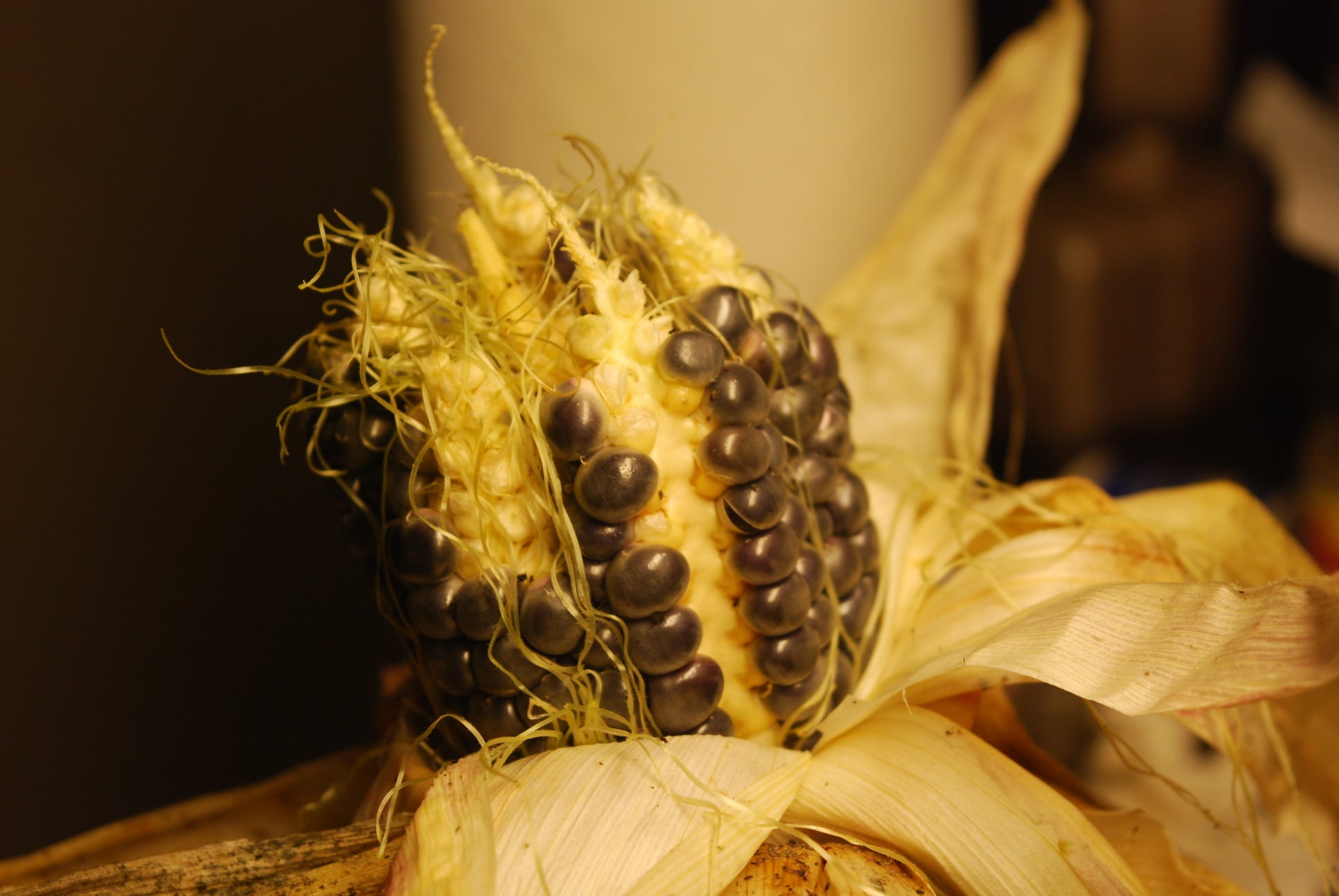 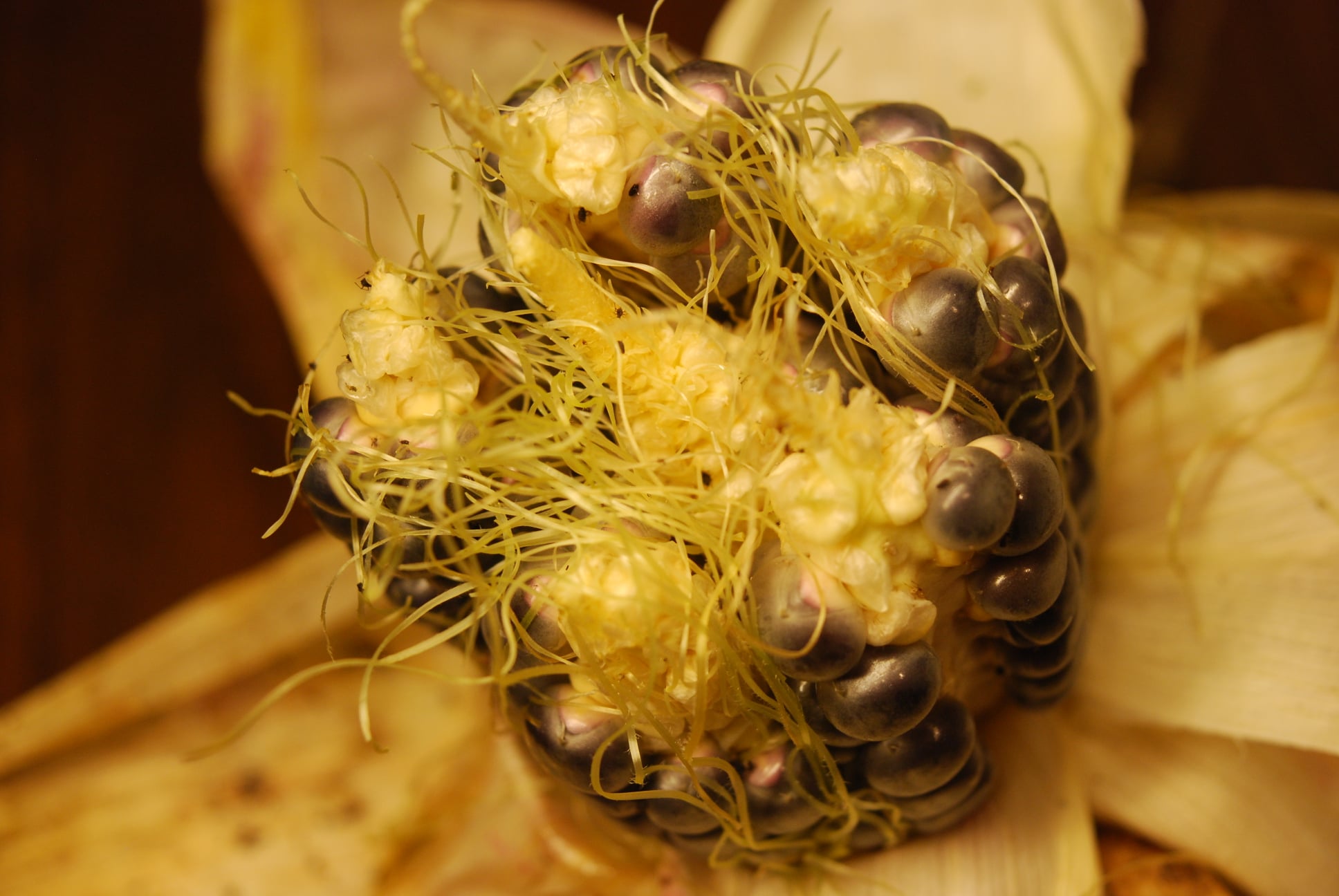 In 2019 I planted some sweet corn next to some Hopi blue flint type corn. Of course my mistake was apparent once I started to see the ears. The closer the two types were to each other, the more they were mixed. So this year, not realizing what might happen, I planted the solid blue seeds that I had saved. I don't know much about corn, clearly, and assumed that if I planted blue seeds, I'd get all blue corn. Not the case. Most was all kinds of different colors, shapes, including some kernels that were clearly sweet corn, with most being a field corn, some with a dent, most without. Then some plants had some nice large ears of large blue kernels.

Okay, so that is just the backstory in case it will help. I ended up with this one 'cob' that is actually 6 small cobs all on one stem. Very bizarre, and I can find nothing like this online. I am curious if anyone can tell me how this happened, and perhaps if planting those same seeds would result in more of this. I took a video to get the best look of this oddity. https://youtu.be/xIAYaRwgQ-k

This looks a lot like a ramosa mutant (for example see the ears in panels A,G,H - taken from Figure 2 from Gallavotti et. al. 20101).

Ramosa mutations affect the branching pattern of the inflorescence (i.e. the ear and tassel in maize - aka. corn in the US) and are typically highly variable. These are thought to be partial reversions to the phenotype of teosinte, which is the putative ancestor of maize2,3.

The unusual ear you collected may have resulted from a spontaneous mutation (possibly transposon driven), but also could be due to infection by a fungus (these sometimes secrete hormones that create developmental effects), or even insect damage to the developing ear.

If this phenotype was due to a heritable mutation you may notice an effect on the tassel (more densely branched), but IIRC this can be quite subtle. The best evidence for this being genetic would be seeing this phenotype recurring in subsequent generations. If possible plant kernels from the strange ear in an isolated area. It is also possible to do controlled crossing in maize — if you go this route I would suggest that you try to self pollinate (i.e. take pollen from each plant's tassel and put it on that same plant's ear).

You also might find this short video to be of interest.

If you get plants with similar phenotypes in this or a subsequent generation I can put you in touch with someone working on ramosa genes who might be interested in having some of the seed if you're willing to share ...

Not the answer you're looking for? Browse other questions tagged genetics botany morphology or ask your own question.

3
Are corn kernels considered a grain
1
Previously frozen papaya seeds sprouted. How will it affect the plants?
16
Are two colors (red + blue) necessary for LED grow lights, or would either color be sufficient?
5
How to turn teosinte into corn?
3
True examples of common variation due to Mendelian Inheritance
6
Why aren't leaves black?
2
What plant have I collected?
0
Hybrid corn yield vs mass-selected corn