Do mRNA vaccines cause transfected cells to be killed by cytotoxic T cells?

Based on my research on how mRNA vaccines (specifically for COVID-19) work:

As far as I understand it, once a cytotoxic T cell encounters a cell that has a foreign protein presented on an MHC I complex, the T cell kills the cell that has presented the foreign protein before it leaves. This means the cells transfected with mRNA through the COVID-19 vaccine (even though a coronavirus hasn't actually hijacked them) will eventually be killed by cytotoxic T cells that encounter them since they are presenting foreign spike proteins on their surface. Is this not toxic for the body since it is killing your own cells? Or does the fact that the mRNA sequences are not self-replicating contain these cell deaths to only the transfected cells and only a few cells die in this process so that the vaccine is not toxic overall?

There is a question on stackexchange that is not only related Why cytotoxic T cells don't kill dendritic cells when they present antigen?

Your question refers to "some cells" (explanatory text) and "transfected cells". Thus, any cell that takes up the m-RNA-vaccine is referred to. However, any answer must be based on the different types of cells involved in immunization, vaccination and - in killing infected cells, in the end. There are the immune cells which present antigen, there are, as well, the body cells which present.

The explanatory text of your question speaks of "presentation". The very first paragraph of Wikipedia on "Antigen presentation https://en.wikipedia.org/wiki/Antigen_presentation seems to even limit the term "presentation" to presentation by immune cells, which would exclude any body cells, like muscle cells transfected with vaccine antigen. This might illustrate that immune cells are different from body cells in respect of presentation of antigen that becomes target of cytotoxic t-cells.

Both immune and body cells take up antigene, however the immune cells, by presenting prime naive T-cells, i.e. activate the T-cells. The related question cited asks about the fate of the immune cells.

As for the fate of body cells like muscle cells you refer to in the last paragraph of your question the video message you link to in your own answer seems to refer to those body cells: transfected cells will simply be killed, but not enough of them to cause harm.

Here are additional remarks, enjoy: I think it is an open question if the transfection as such would lead to cell death (assuming some failure of cytotoxic T-cells, not doing their job). Think of vaccination that transfects with "attenuated", if not live virus: even if the virus is incapable of - natural - replication it is unlikely that the host cell whose ribosome machinery has been usurped can keep up its metabolism. I would like to be allowed to mark the following as a new thought of mine: the fact that the antigen is being presented speaks in favour of the cell not being able to survive - which is counterintuitively (how can a cell infected by virus still be able to digest, process, transport and present antigen on its MHCs, at all? Looks like it will stay alive.) From the very fact of antigen presentation it is possible to infere, in my opinion, that the cell will not survive transfection. Host cells may have their own, inner defence mechanisms which are able to beat infection without any presentation of antigen - think of "interferon", but also, nowadays, of double stranded RNA, dsRNA. A cell that is successful in defeating the virus without engaging the adaptive immune response would cancel out its survival by presenting and attracting cytotoxic t-cells. So it is a possibility that cells in spite of being transfected by mRnA vaccine do not die. However, that would be considered a vaccine failure. So with effective vaccination transfected body cells will die.

Caveat: from my reading of textbooks it is a possibility that vaccination might be effective even if body cells are not transfected, but that is beyond your question. Premise of your question is that a cell is being transfected (then what happens?).

A reference on the possibility that a "transfected cell" might survive by self defence would be "RNA interference", https://en.wikipedia.org/wiki/RNA_interference

Last not least - see the video you linked to - there is "B cell immunity". To my mind it is a possibility that B-cells become transfected by mRNA vaccine - if so, they should present the antigen as an endogenous on to cytotoxic T-cells which makes your question very relevant in respect to B-cells, in my opinion. However, B-cells produce antibodies, considered most important in vaccination. This speaks in favour of B-cells taking up antigen via their B-Cell receptor that should be among cell debris of transfected cells that died - for instance few muscle cells transfected by vaccine. What you need here, in respect of B-cells is authority on either cross-presentation of endogenous antigen by B-cells (if mRNA is being uptaken through membrane, if B cells are transfected) or, authority on B-cells "only cleaning" up dead cell's antigen as part of dead cells, killed by virus or immune cells.

My answer is in line with the answer you already gave - elaborating on what is in fact causing the cell's death:

"Do mRNA vaccines cause transfected cells to be killed by cytotoxic T cells?"

“Is this not toxic for the body since it is killing your own cells? ”

Yes, cytotoxic T cells do kill mRNA vaccine-transfected cells, but not to the extent of harming your body. This is because the mRNA vaccine cannot be not integrated into the host genome, mRNA then will be degraded after translation within hours, preventing spike proteins variants to be continuously produced. Meanwhile, these locally produced antigens will mark the cells as "transfected", and induce immune response against the virus, including the activation of cytotoxic T cells, which directly kill the infected cells without damaging healthy tissues [1]. In some people, this process might cause some degrees of inflammatory responses, including pain, redness, swelling, fever, etc [2].

Individual vaccine antigens induce innate immune responses that may differ qualitatively or quantitatively according to the vaccine composition, but that induce a good adaptive immune response.

Once all transfected cells are eliminated and the antigens are no longer present, the level of antigen specific cytotoxic T cells will return to baseline [3].

cells transfected with mRNA through the COVID-19 vaccine (even though a coronavirus hasn't actually hijacked them) will eventually be killed by cytotoxic T cells that encounter them since they are presenting foreign spike proteins on their surface.

It's not a given that happens before the exogenous mRNA inside the cell runs out. There's a decay process for mRNA of any kind, and exogenous mRNA is particularly targeted by intracell innate responses like TLR7 (although mRNA vaccines try to counter this with nucleoside modification, which delays the process).

Further, MHC-I isn't a flag that goes up an stays like that forever until the cell is killed. MHC-I is subject to recycling.... and it's a darn complicated process whose duration depends whether the MHC-I is fully or sub-optimally loaded, but it happens regardless of whether any killer T cell shows up to answer the "suicide-by-cop 911 call" or not.

Both the question and the 3 existing answers to it apply the "deterministic computer model" to biology, taking processes that in reality happen with some probability (which may be pretty low) as being 100%.

And it turns out that nucleoside modification has a somewhat surprising side effect: it reduces killer T-cells leaving helper T-cell activations intact (which help with the production of antibodies). One review mentioned that

Comparative studies performed by our research group and others demonstrated that nucleoside-modified mRNA LNPs outperformed unmodified mRNA LNPs in translation capacity, but failed to elicit successful CTL [cytotoxic T cell] responses due to the drastically reduced production of type I IFNs [119, 157].

The research group which wrote that review seems focused on cancer immunotherapeutics, and the two cited studies definitely are about that. The lackluster CTL activation is a big deal for cancer therapy, but not really a problem for priming your immune system against an infectious disease you haven't yet encountered "for real".

In the 1st of those two papers cited there's an interesting [pair of] graph[s], showing the point I mentioned previous about killer vs helper T-cells. 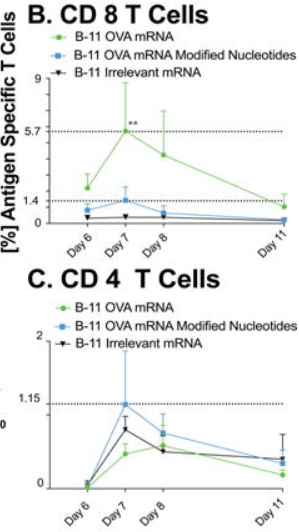 And since mRNA vaccines are normally injected in skeletal muscle, it's also worth knowing that

Muscle fibers do not normally express major histocompatibility complex class I (MHC-I) molecules, and their reexpression is a hallmark of inflammatory myopathies.

According to the person who made this video's response to my comment asking this question, the transfected cells are killed by cytotoxic T cells, but the amount of transfected cells dying is not enough to cause irreparable harm since the cells regenerate themselves fairly quickly through division. Plus, the acquired cell-mediated in addition to humoral immunity is well worth the risk of an mRNA vaccine over a standard protein vaccine (which only leads to humoral immunity). If anyone has a better answer than this please let me know.

Not the answer you're looking for? Browse other questions tagged immunology coronavirus vaccination mrna or ask your own question.

7
Is the covid-19 vaccine-induced copy of the protein spike also damaging cells?
7
Why cytotoxic T cells don't kill dendritic cells when they present antigen?
2
How do adenoviruses interact with muscle tissue that it makes them acceptable as vector viruses?

7
Why cytotoxic T cells don't kill dendritic cells when they present antigen?
10
Spike protein production by mRNA vaccines?
7
Is the covid-19 vaccine-induced copy of the protein spike also damaging cells?
5
Longevity and extent of transfection after SARS-COV-2 vaccination with Janssen
5
Which cells do mRNA vaccines target?
0
How do mRNA vaccines work with respect to presentation of the antigen?