What is genomic imprinting?

Please try to explain all this in as simple words as possible.

Genomic imprinting is an epigenetic mechanism of inheritance which allows genes to be expressed differently depending on which parent they come from. This means it is modification of the genome, or changes what the genome produces, without changing the nucleotide (DNA) sequence. The result of imprinting in diploid organisms is that one of the two alleles is silenced. This page provides a good overview of imprinting.

Two major mechanisms are proposed called DNA methylation and histone modification though others may yet be discovered. DNA methylation silences a gene by adding methyl groups to nucleotides (it modifies the nucleotide but not the sequence) which affects how they are expressed, whilst the exact mechanism is unknown (at least I can't find one on scholar) it does appear to be a key factor in some cancer growths. Genes can also be silenced by histone modification, binding a gene to histones reduces its activity, ie it produces less product.

Specific control of a gene, rather than entire chromosomes described above, is only known in plants and some mammals. In this case, when a gene is imprinted, the gene is silenced. An example is Igf2 in mice described in the below diagram which is maternal imprinting (ie the mothers allele is silenced). When the mother has a mutant allele and the father a normal allele and normal offspring is produced. When the male passes on the Igf2 mutant the offspring is mutant because the mother's normal copy was imprinted. 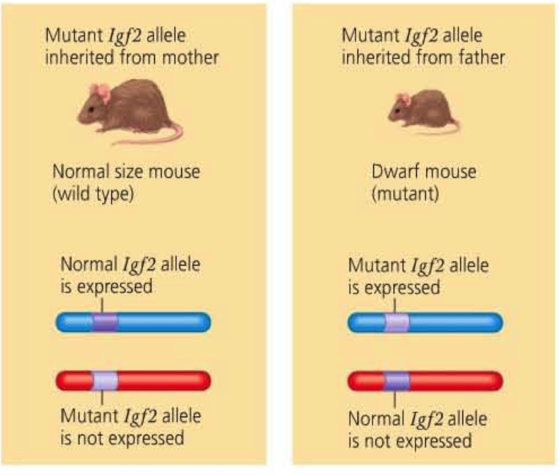 The Igf2 gene can be seen in the above diagram. This is the one of the first evidences of genomic imprinting discovered. In the first part of the diagram a mutant gene trying to make the mouse offspring dwarf is passed from the mother. It can be seen that the mouse is not dwarf because the allele for size in this mouse is an imprinted. The maternal allele is not expressed, so the dwarf trait is not expressed in the offspring, only the normal size trait from the father is. In the second part of the diagram the father passes on the mutant gene and therefore all the offspring will be dwarf because the size trait is completely dependent on the paternal allele, which in this case is dwarf. - Creating Variation

The page this diagram and quote comes from also has a good section on genomic imprinting.

It is incorrect to say that a trait is imprinted, although the phrase is often used. I will simplify this by talking about just two chromosomes. A mammal will have one chromosome from mother and one that is nearly identical inherited from the father. The genes on each chromosome typically have an equal likelihood of being expressed. An imprinted allele creates silencing on one chromosome and gene expression from solely the other parent. There are many more complexities and Wikipedia is a great source as well as Geneimprint http://www.geneimprint.com/site/what-is-imprinting

See the link regarding Parental Imprinting, the definition is concise. http://groups.molbiosci.northwestern.edu/holmgren/Glossary/Definitions/Def-M/molecular_imprinting.html

Not the answer you're looking for? Browse other questions tagged genetics homework epigenetics or ask your own question.

0
Autosomal Recessive Trait when skipping one generation
1
Which X-Y chromosomes have the developmental genes for mammals?
2
How can a YAC be screened against a cDNA library and a cosmid library of genomic DNA to find a gene?
0
X-recessive disorders and genetic markers
5
Pedigree Analysis: Problem
0
Passing on Alleles
7
How to determine whether changes of an allele's frequency are due to genetic drift or selection?
1
What is meant by genomic imprinting being reversible?