Do fish depend on plants for survival?

As far as I know, all land life depends on plants for survival. Plants convert sunlight to energy using photosynthesis, herbivores consume plants, and carnivores consume herbivores. All the energy is coming through the sun and being gradually processed by this food chain. If plants were removed from the system, all animals would eventually die as they would run out of energy.

Do fish and other water creatures also depend on plant life in the same way?

Yes, photosynthesis provides nearly all of the ocean's biomass and energy. The best is to study oceanic food chains and webs. 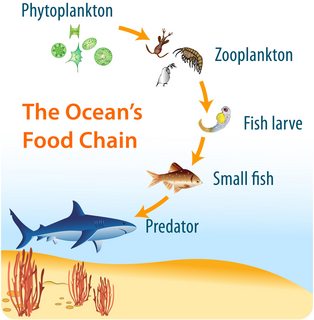 It looks like there aren't enough plants in the ocean because they don't form huge reserves of foliage and branches... 10% of land plant mass dies and is replaced every year, and 100% of oceanic plants die and are replaced every week:

"Biologists set out to estimate the total biomass of phytoplankton and calculated that less than one billion tonnes of the single-celled microorganisms were alive in the ocean at any one time. There were 45 billion tonnes of new phytoplankton each year, 45 times more than their own mass at any given time. The phytoplankton would therefore have had to reproduce themselves entirely, on average, 45 times a year, or roughly once a week. In contrast, the world's land plants have a total biomass of 500 billion tonnes, much of it wood. The same calculations showed that the world's land plants reproduce themselves entirely once every ten years. https://www.nature.com/articles/483S17a

Every step of the marine energy pyramid has about 10% efficiency, so the shrimps and zooplankton take about 10% of the phytoplankton energy, then small fish 1%, and big fish 0.1% of the plant energy. For every 500,000 units of radiant energy that hit the ocean surface, 2% is converted to phytoplankton at the base of the trophic pyramid, and the 500,000 units are necessary for every 10 units that a tuna consumes. https://oceantracks.org/sites/oceansofdata.org/files/energytransfer.png

In biology, we typically study coccolithophores and phytoplankton to learn the marine food web.

All marine life needs energy to survive and reproduce. "Heterotrophic" organisms get their energy from eating other organisms and digesting the molecules of their tissues for driving cellular respiration/function. Ultimately, though, entire ecosystems and food webs are dependent on the non-biotic energy (e.g., sunlight) captured by "autotrophs" (aka "primary producers") and stored in the molecules of their bodies.

Plants make up only a portion of the autotrophs present in the oceans. Photosynthesis by phytoplankton accounts for the majority of Net Primary Production (total energy stored by autotrophs minus energy used by autotrophs to live) in our oceans. Chemosynthesis of bacteria and archaea in the ocean depths account for a small degree of NPP, too.

Heterotrophic organisms eat the autotrophs, and higher trophic heterotrophs eat lower trophic-level organisms. Dead matter (still containing energy-rich molecules such as sugars and fats) drift to lower ocean depths to provide organisms farther from the photosynthetic surface regions with most of their energy. At all trophic levels, energy is used to drive cellular work or lost as heat; as such, less and less energy is available at higher trophic levels and therefore necessitates eating more and more food. 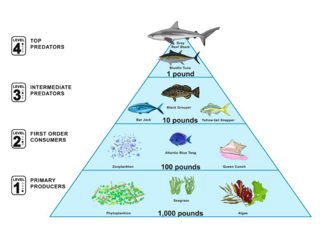 SUMMARY: all marine organisms are dependent on primary producers, most primary producers are photosynthetic, plants are responsible for a significant (though minority) amount of productivity in oceans, and phytoplankton account for the majority of energy capture in our oceans.

All biological systems on earth require energy and matter for survival. Primary producers are the organisms that acquire energy from non-biological sources to make them available to the rest of the biotic component of the ecosystem (i.e., their associated food web; sometimes visualized as an energy pyramid).

If all other organisms in an ecosystem depend on these primary producers as an energy source, it's important to try to quantify how much energy the autotrophs are converting from non-biotic sources and storing in their cells. We can quantify this in terms of productivity: 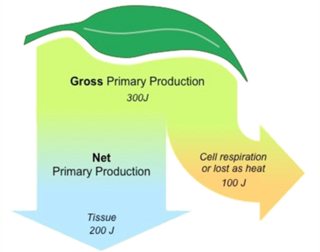 Although photosynthetic plants are the best known primary producers, they are not the only autotrophs on earth. In fact, the large portion of ocean productivity is a result of phytoplankton, a diverse collection of photosynthetic protists and cyanobacteria.

The photosynthetic activity of plants and phytoplankton provide the majority of NPP for the entire ocean, but they are both limited in where they are located.

Sunlight is limited by water depth, reaching depths of less than 300 m. 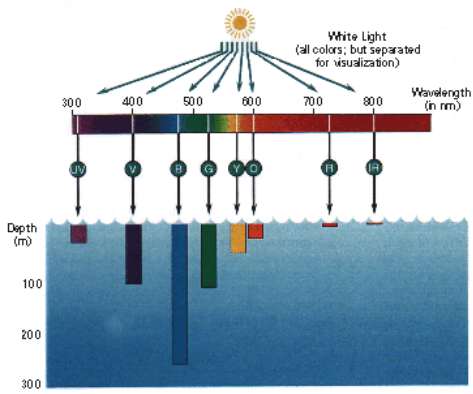 Since sunlight-availability dictates NPP to such a large extent, we can divide the ocean into vertical zones based on light availability. Only the top 200 m, referred to as the euphotic zone, has enough sunlight available for photosynthesis.

Both of these photosynthetic organisms are also limited by nutrient availability.

Although the majority of production in oceans is a result of euphotic photosynthesizers, very small amounts of production are the result of chemosynthesis at thermal vents and cold seeps in deeper ocean depths. the chemoautotrophs here are all bacteria or archaea.

NPP of our Oceans

So far we discussed the importance of net primary production (NPP), the autotrophs responsible for the ocean's NPP, and the limitations of where such autotrophs can live. The question still remains: to what degree do the oceans rely on these variable sources of NPP?

According to Fox et al. (2020), "Assessments of marine primary production...are made difficult by the extreme plasticity in phytoplankton physiology". However, certain broad trends are apparent.

Well, given that both plants and phytoplankton can exist in coastal/littoral zones, these zones (especially those associated with estuaries bringing in additional resources from freshwater systems), tend to have the greatest NPP per unit area of anywhere in the world.

However, since the pelagic, or open-water, portions of the euphotic zone make up such a large percentage of the earth's surface (~70%), this so-called epipelagic zone accounts for more NPP per year than any other biome or life zone globally just due to the immense area/volume for phytoplankton to live and photosynthesize.

Since only autotrophs can convert non-biologic forms of energy into chemical stored energy that heterotrophs such as fish and other water creatures can consume, all non-photosynthesizing organisms throughout the ocean's depths rely on the consumption of these autotrophs (or lower trophic-level heterotrophs) for energy. In fact, according to sigman and Hain (2012), usage of the energy captured but autotrophs and utilized by higher-trophic heterotrophs is so robust that all but <1% of the energy initially captured ever reaches the ocean floor as fallen debris/wastes/decomposing "snow".

Chapter 17 "the Flux of Energy through ecosystems" in Begon, Townsend, and Harper. 2006. Ecology: From individuals to ecosystems. Blackwell Publishing, Malden, MA, USA.

Not the answer you're looking for? Browse other questions tagged botany ecology photosynthesis marine-biology energy or ask your own question.

34
Can any animals photosynthesize?
26
What prevents predator overpopulation?
6
The colour of aquatic plants found deep under oceans
10
Inexperienced divers damage coral, but parrot fish eating coral doesn't do damage?
5
How come only a handful of animals can do photosynthesis?