The C-terminal domain (CTD) of human RNA polymerase II has 52 repeats of a similar heptapeptide sequence.

Will the RNA modification proteins only bind to some repeats at specific locations on this (e.g. the 1st repeat/the 10th repeat/the last repeat, etc), or will they bind randomly to any of the repeats?

If they bind to specific repeats, how can this specificity achieved?

If they bind to any of the repeats, then it would seem to me that several molecules of an RNA modification protein could be bound to a single RNA polymerase II CTD. Does this happen?

In attempting to answer questions about protein structure, the first port of call (which one might expect the questioner to have also visited) is the Protein Data Bank — the global repository of such structures. There one can search for RNA Polymerase II CTD, look for complexes with other proteins, find recent publications in which they are reported, and consult them to find the state of knowledge of a topic.

Knowing nothing of the protein in question, I adopted this approach, and after looking at a few proteins and a few papers the following points seemed to emerge. 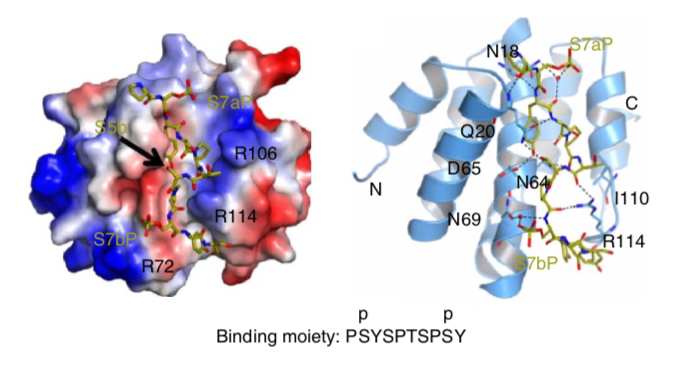 The question contains two invalid assumptions — that proteins that interact with the CTD should interact with a single repeat, and that repeat should have a compact structure. Nevertheless, the functionality of the repeats and whether there are multiple interactions are valid questions. It appears from discussion in the paper by Ni et al. that the interacting unit is a 24-mer that binds to a dimer of the interacting protein (CID), and they propose that for phosphatases (and I presume protein kinases)15 molecules interact with the CTD at once.

What the situation is with 5′-capping or 3′-processing enzymes is another matter. There will only be one mRNA emerging from the RNA polymerase, so multiple binding would appear to make no sense. How much of the CTD is needed as rope to attach the processing enzyme soap? Does the soap slide along the rope? One would hope that eventually such questions would be answerable by molecular visualization techniques (see e.g. this BioRxiv preprint).

Not the answer you're looking for? Browse other questions tagged molecular-biology rna transcription protein-interaction or ask your own question.

15
Does RNA polymerase move around DNA or does DNA rotate beneath the polymerase?
2
Determining sequence of oligoribonucleotide
3
Do RNA molecules bind each other?
0
Questions about RNA Polymerase
5
RNA polymerase and DNA helicase
5
Is viral single-stranded RNA in the absence of reverse transcriptase infectious?