Why does vaccine development take so long?

The main principle behind a vaccine is to take a deactivated virus, "show" it to the immune system so it can "learn" how it looks like, so if and when the real virus does attack us, our immune system is already prepared for it. Vaccines have been developed using this idea even in the 1880's.

If that's the case, why does it take so much time and effort to develop a vaccine, for example, against covid-19? (and why are there several variants with different measures of reliability?) Is it only about balancing how strongly we damage the original pathogen, too much damage and our body might not learn the correct identifiers, and to little damage and it might still be active enough to cause the disease?

Roni Saiba's answer does a good job of explaining what goes into current vaccine development and why it takes so much effort, but I want to directly address the question of why we can't just grow some virus, kill it with UV and have a protective vaccine.

The answer is that not all immune responses to viral antigens are helpful in fighting infections of that virus. In some cases it can be harmful; antibodies to dengue virus of one serotype will attach to viral particles of another serotype but aren't able to inactivate them. The attachment of antibodies to active viruses makes their absorption by cells more efficient, and infections where this antibody-dependent enhancement occurs are more severe than first-time dengue infections.

Some viruses have evolved mechanisms to capitalize on this. The reason we need to get a new flu shot every year is that influenza viruses present a "knob" at the end of their glycoprotein that can change its structure and still retain function. This part is much more 'visible' to the immune system than parts of the virus that can't tolerate changes, so the immune response to this variable part outcompetes and prevents an immune response that would provide long-lasting protection. Conserved stalk-targeting vaccines are being intensely investigated for this reason. SARS-CoV-2 may have a immune-faking mechanism as well: the "spike" glycoproteins responsible for binding the ACE2 receptor and entering the cell convert to their post-binding form prematurely part of the time. Antibodies that bind the "post-fusion" form of the protein don't inactivate the virus, and this form sticks out more so may serve to compete for immune attention with the pre-fusion form that would provide protection if bound by antibodies.

In this last example, we can see that a vaccine made of killed SARS-CoV-2 virus particles would be useless if all of the spike proteins had converted to the post-fusion state. The mRNA vaccines therefore don't encode the natural spike protein, but a mutated version which can't convert to the post fusion state as easily:

In conclusion, viruses and the immune system are very complicated. Simple vaccines work for some viruses, and don't work for others. When they don't work, the reason is always different, but hopefully I've communicated some general understanding of the background issues.

EDITS: This doesn't relate to the rest of my answer but I want to respond to Ilmari Karonen's and there is not enough room in a comment.

Looking at the timeline for SARS-CoV-2 vaccine development gives a very misleading impression of how long it takes generally. This is because ~90% of the development work was already done before COVID-19 was ever identified, in the 18 years since the SARS-CoV-1 outbreak started in 2002. Vaccines against SARS were developed and tested up to phase I trials, but couldn't proceed further since the virus was eliminated. I discussed this in a previous answer to a similar question, but to expand/reformat, here's some of what we knew and had available on March 17th 2020, when the "covid vaccine timeline" begins:

In addition to these, a large amount of miscellaneous knowledge about coronavirus functions and the immune reactions to them had been accumulated, and this sped up development, and increased confidence in results, which allows vaccine candidate production and testing to proceed more aggressively.

Historically, vaccine development has taken years or decades of research after the need has been identified. Testing is still longer in many cases, but the current case is very unusual.

While the existing answers are great and cover a lot of the difficulties in vaccine development, I feel that they fail to address (or at least sufficiently emphasize) the fundamental misconception at the core of the question:

If that's the case, why does it take so much time and effort to develop a vaccine, for example, against covid-19?

The answer to that question is simple: developing a vaccine does not take much time. What takes a lot of time is testing the vaccine and making sure that it does not have any unforeseen side effects.

For example, let's take a look at the Pfizer/BioNTech COVID-19 vaccine, since it's been in the news lately. To save time and research effort, I googled for "pfizer covid vaccine timeline" and found this article from Financial Review, whose timeline I will further summarise below:

So, basically, even under this extremely accelerated emergency testing and approval regime (which squeezed into months what would normally take years), the actual development of the vaccine took less than 20% of the total time from initial planning to approval. All the rest is just testing, testing and more testing.

Now, the other answers have already covered pretty well the reasons why all this testing is needed, but let me anyway give a quick summary for completeness:

FWIW, most of the same issues apply to all new medical treatments, not just to vaccines. New drug development and testing is also notoriously slow and expensive for pretty much the same reasons — and even then there are plenty of cases where major side effects were only discovered when the drug was already on the market.

One issue that does specifically affect vaccines is that they're preventative treatments that must be administered to a large fraction of the healthy population, not just to already infected people. (Even only vaccinating specific groups at high risk isn't generally sufficient to provide herd immunity.) This means that their safety needs to be tested to a significantly higher standard (since many more people will be receiving the vaccine) and that, as noted above, determining their efficacy requires a must larger pool of test subjects (since not all subjects will be exposed to the disease).

Anyway, the upshot of all this is that if it weren't for all this testing and re-testing, we could've had a COVID-19 vaccine in April, or maybe earlier. (Moderna started their vaccine development already in January, and their first human trials in March.) But even in the face of a global pandemic, the testing is still necessary to make sure that the vaccines that eventually do get approved and widely used will in fact do what they're supposed to do, and that any side effects they may have don't turn out to be worse than the infections they prevent.

BTW, this need for extensive human testing to confirm the safety and effectiveness of a vaccine even after it has been developed is not just the reason why even one company will often develop multiple initial vaccine candidates in parallel, but also one of the main reasons (besides simply capitalism) why there are so many different competing vaccines being developed by different companies. Basically, even the companies that were late to start their vaccine development and testing could, for a long time, still hope to be the first ones to market if testing happened to turn up serious issues with their competitors' vaccines.

Of course, other reasons exist too: the second, third, fourth etc. companies to get their vaccine approved can also expect to win a decent share of the market, especially if their vaccine happens to be cheaper, more effective and/or easier to store and transport than the alternatives. Also, many countries may prefer to use a locally developed and produced vaccine if one is available in order to limit their dependence on foreign suppliers.

While it is true that deactivated (e.g. heat killed viruses) are used in some cases, the Pfizer, Moderna vaccines are in fact mRNA vaccines. The figure below from the Oxford website details the processes involved in vaccine their DNA based vaccine development. This Moderna page has a video detailing their approach as well. Pfizer also has a nice video explaining the process of mRNA vaccine development. 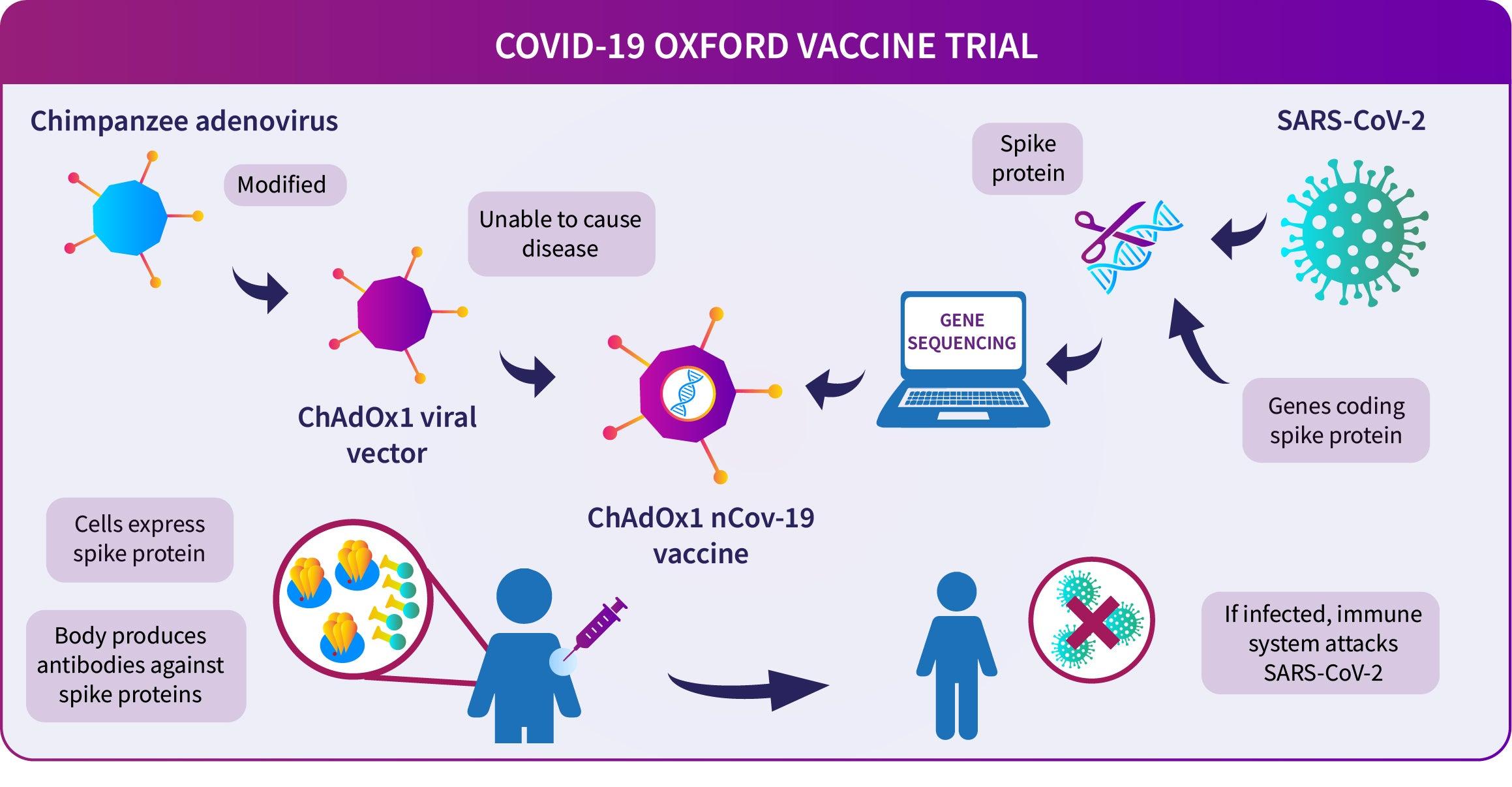 As you can see, it is not an easy process. A prerequisite of both their solutions is the knowledge of the SARS-CoV-2 genome sequence (in this case the genome is a single stranded RNA). This requires some time to get done and once the data is available, one has to wait for others to verify it to some extent. Interestingly, the Moderna video says that they had a human ready vaccine in 42 days.

The differences in efficiency can stem from multiple factors:

and many other factors which are beyond the scope of a single answer and can be proprietary knowledge of the manufacturers.

Another significant addition to the 'time' factor is the clinical trials. Pfizer and Moderna require two doses spaced over 3-4 weeks for their phase-I trials. Since these vaccines are being rapidly developed, and you are amidst a global pandemic, you get only 1 chance at a clinical trial (and subsequent profits) and you have to make it count. Various national regulatory authorities also need to keep the health of their citizens in mind. Thus there is immense pressure to get these trials done right and the global consensus in this case seems to be taking a slightly long duration of clinical testing.

Regarding the last question, no, none of the Oxford, Pfizer or Moderna vaccines care about damage done to the original pathogen because there is no pathogen being delivered.

Not the answer you're looking for? Browse other questions tagged virology vaccination or ask your own question.

2
The fastest vaccine developed is a mumps vaccine, which took 4 years. Where is the hope that we will find a COVID vaccine in less time?
-2
Is it possible to spread vaccine through air?

11
Why does the HPV vaccine not work on already infected people?
7
Can people with AIDS/HIV be vaccinated?
6
Why can't we always create a vaccine against a virus when an ELISA test to detect it is possible?
1
When someone gets infected with influenza, and gains some immunity, is that immunity just as good as getting it from a vaccine?
2
Is covid vaccine helpful for a covid patient?
3
How long after taking a vaccine shot (Oxford–AstraZeneca) could an individual test negative for antibody (IgM)?
11
Viral vector vaccines - why doesn't the viral vector get attacked by the innate immune system?