I am researching the complement system, and have ran into something I'm not really sure about. In the past, the C1r2s2 complex was thought to be an 8-like structure tucked inside C1q's collagenous strands. However, this article says that the serine proteases actually protrude away from the core. Originally, it is said the C1s SP cleaves the C4 and C2 proteins because the C1r proteins are hidden in the core. If this new structure is true, however, then the C1s and C1r proteins are close to each other outside the C1q core. If this is the case, what is preventing C4 from being cleaved by C1r instead of C1s? Their serine protease domains should be largely identical. 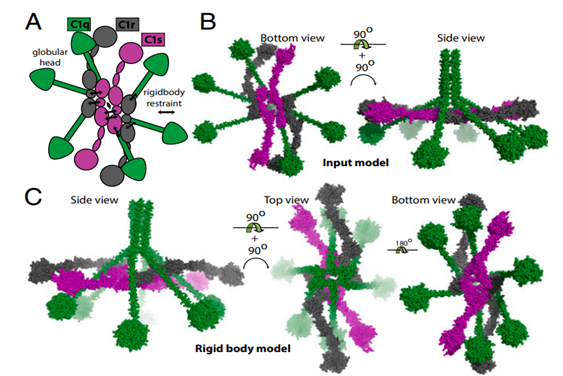 I have found an answer. The serine proteases on complement proteins actually have very limited enzyme substrate specificity. C1r only has two natural substrates, zymogen C1r and C1s, whereas C1s can only cleave C4, C2 and a few non-complement proteins. This was proven by superimposing the structure of serpins (serine protease inhibitors) with C1r and C1s. This analysis revealed that the access to these substrate-binding sub-sites is severely restricted, compared with digestive serine proteases such as trypsin. The trypsin or chymotrypsin-like pockets were only the primary specificity pockets. The strong preference displayed for Gln residues at P2 and Ile residues at P1 matched those found in physiological substrates of C1r, zymogen C1r and C1s. An example on how these specificity filters work can be seen when we substitute the Gln at P2 with Asn or Gly. To only allow Gln residues, polar or charged molecules will be placed where Gln’s residue’s polar head will be, and hydrophobic residues where the carbon chain will be. When Asn is substituted for Gln, the shorter carbon chain will cause the polar head to overlap with the hydrophobic residues of C1r, which is highly detrimental for binding. Substituting this with Gly will eliminate the interaction altogether, so it will not be as detrimental, but the stability resulting from the Gln-C1r interaction will be lost.

More information in this article here.

1
Why denatured proteins can't fold back in their native form
7
For Penicillin Binding Proteins, why is the enzyme-peptide complex less stable than the enzyme-β-lactam complex?
3
Why is pepsin able to operate at low pH?
3
Are all enzymes proteins?
9
Why can't H3O+ ions pass through aquaporins?
1
Why can't protein pumps reuse phosphate groups?