What is a "membrane holding potential"?

What is a membrane holding potential? I have come across this term but haven't been able to find a definition.

From "Voltage-gated sodium channels as therapeutic targets in epilepsy and other neurological disorders", legend to Figure 4:

Voltage-dependent and frequency-dependent inhibition of voltage-gated Na+ channels by Na+ channel blockers (A) Inhibition of Na+ currents by phenytoin is dependent on membrane holding potential. The top traces show currents evoked by depolarisation to 0 mV, with control (a standard physiological saline solution) and with 50 M phenytoin. In each of the four pairs of current traces, the larger trace is the control. The traces on the left were elicited from a holding potential of 130 mV, whereas the traces on the right were from a holding potential of 65 mV. The control current at 65 mV is smaller, due to greater inactivation induced by the more depolarised holding potential. Moreover, phenytoin is a much more effective blocker at the more depolarised holding potential. This is more evident in the bottom traces, in which the amplitudes have been scaled so that the control currents are the same size. (B) Phenytoin block builds up during repetitive channel activation. The graph shows normalised current amplitudes of whole-cell Na+ currents over the course of depolarising pulses to 0 mV, from a holding potential of 85 mV, applied at 2 Hz. Red dots indicate discrete measurements. Dashed line indicates a baseline to monitor decline in amplitude. (C) Voltage-dependent and frequency-dependent inhibition of Na+ channels by phenytoin and other antiepileptic or local anaesthetic drugs with a similar mode of action (green diamond) are qualitatively explained by a modulated receptor model. In this model, the drug binds with higher affinity to inactivated channel states than to resting channel states. Biophysical and molecular data suggest that the modulated receptor site is within the inner vestibule of the ion-conducting pore. 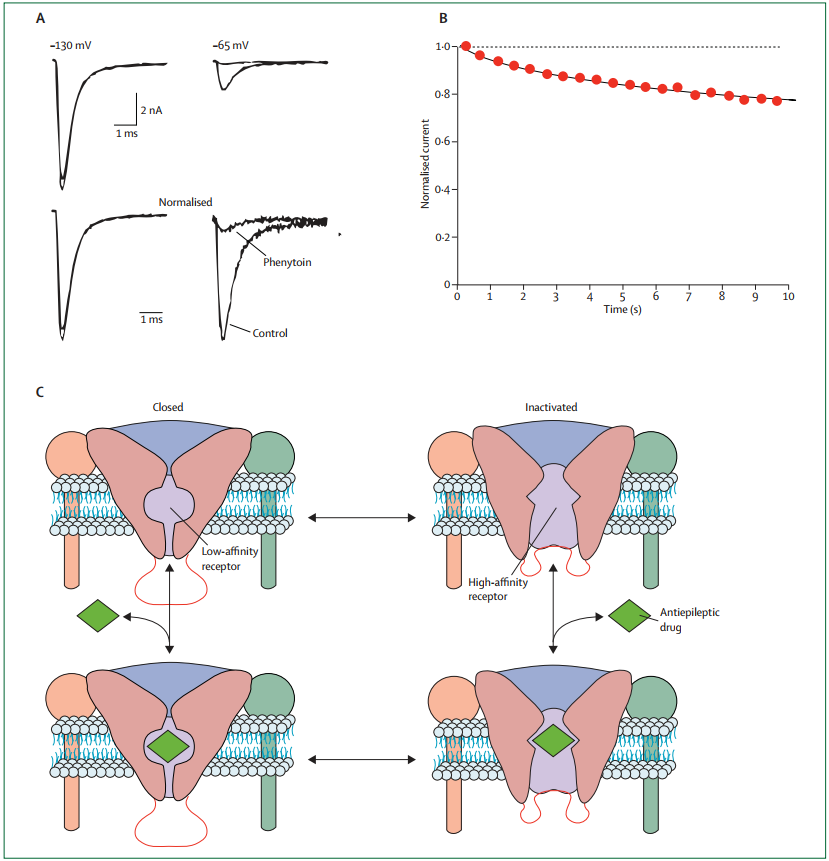 The membrane holding potential is the voltage level set by the experimenter in a voltage-clamp recording.

Not the answer you're looking for? Browse other questions tagged electrophysiology or ask your own question.

10
How is membrane capacitance related to the increased speed of saltatory conduction?
7
What is the reason behind high resting membrane potential of pacemaker cells?
5
How's the membrane potential restored to resting state after hyper polarisation?
6
Why Goldman Equation cannot be used to calculate dynamic changes of membrane potential
2
Help me understand voltage patch clamping