This beautiful insect was found in Kenya today - and we don’t know what it is. We think it may be a mantid of some sort?!

Nairobi kenya, croton trees, cape chestnuts, bougainvilliea, there is quite a lot of lichen on the trees.

Despite looking to be the size of someone's arm, it's about 2” long! Needless to say, no-one had a good camera at the time. Just phones!

The colour of the insect is very similar to the lichen on the trees (hence the mention above).

Someone suggested it was a 'grizzled mantid' Gonatista grisea (Fabricius), but we didn't think they are found native to Kenya - and likewise, we don't see a protuberance on the back of grizzled mantids... Still hoping for an answer.

You can see it also has very small wings, which I hear is a feature of some mantids - micropterous mantids.

I don’t know anything about these - someone said ‘some sort of bark mantis’.

Further update - The pronotum of Tarachodes spp females has two conical tubercles. The males are mostly fully winged, whereas the females often have shortened wings.

So it's probably a female Tarachodes species found in Kenya (or thereabouts). 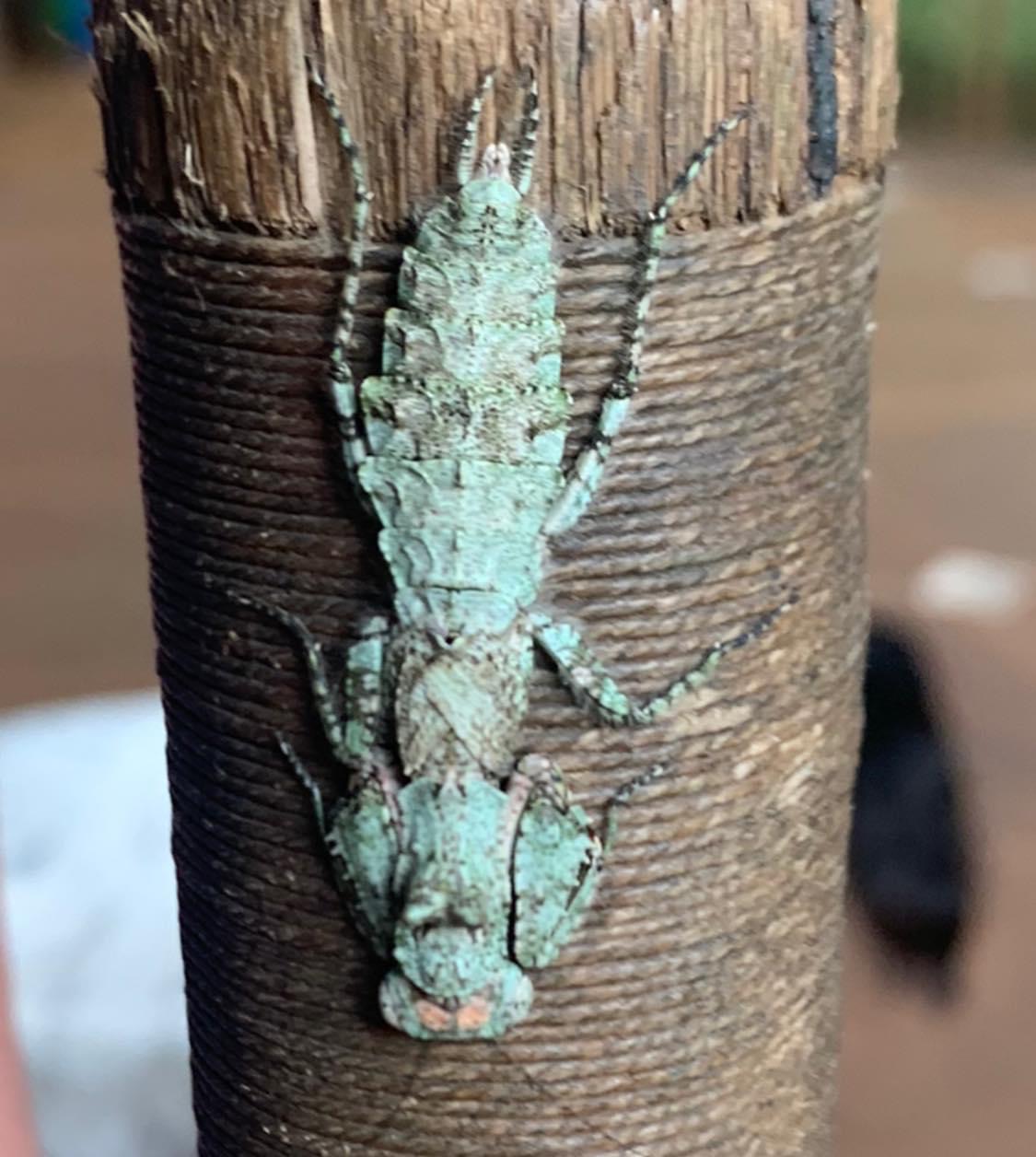 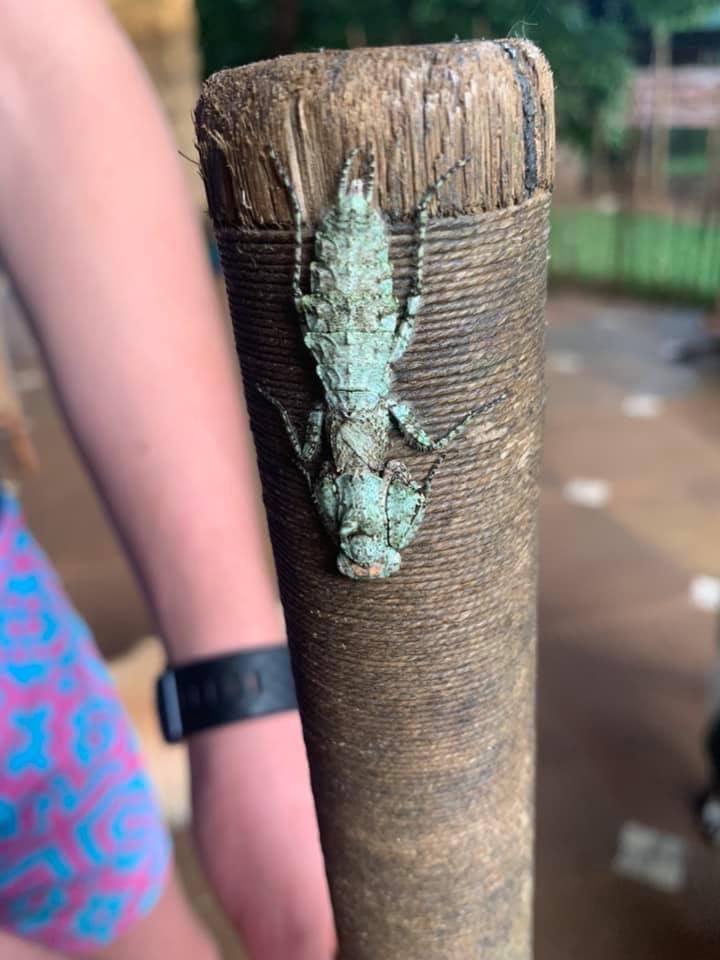 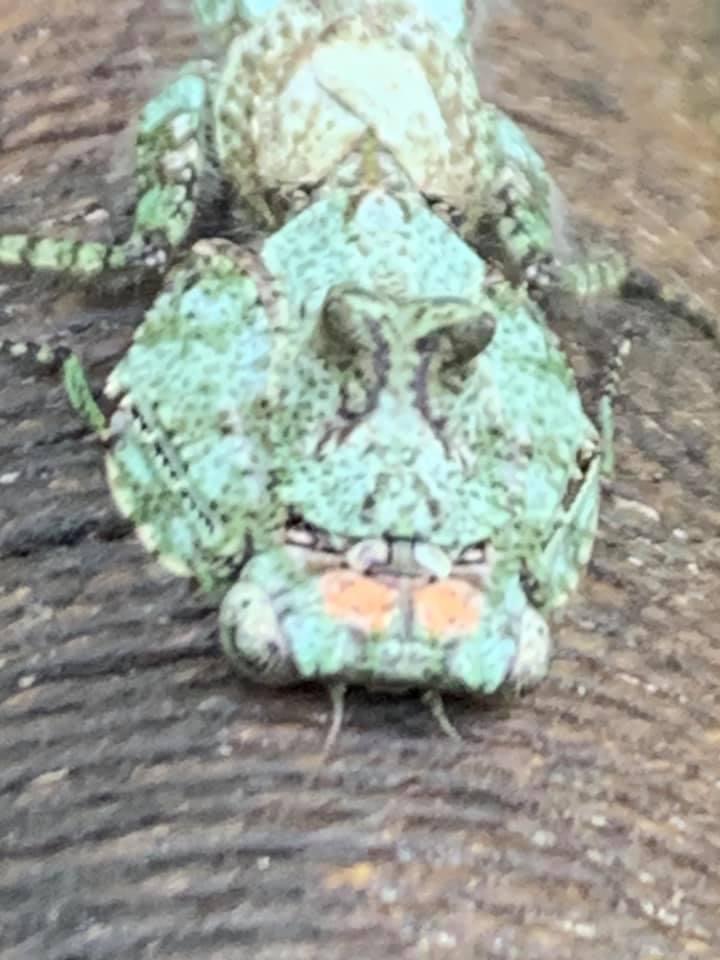 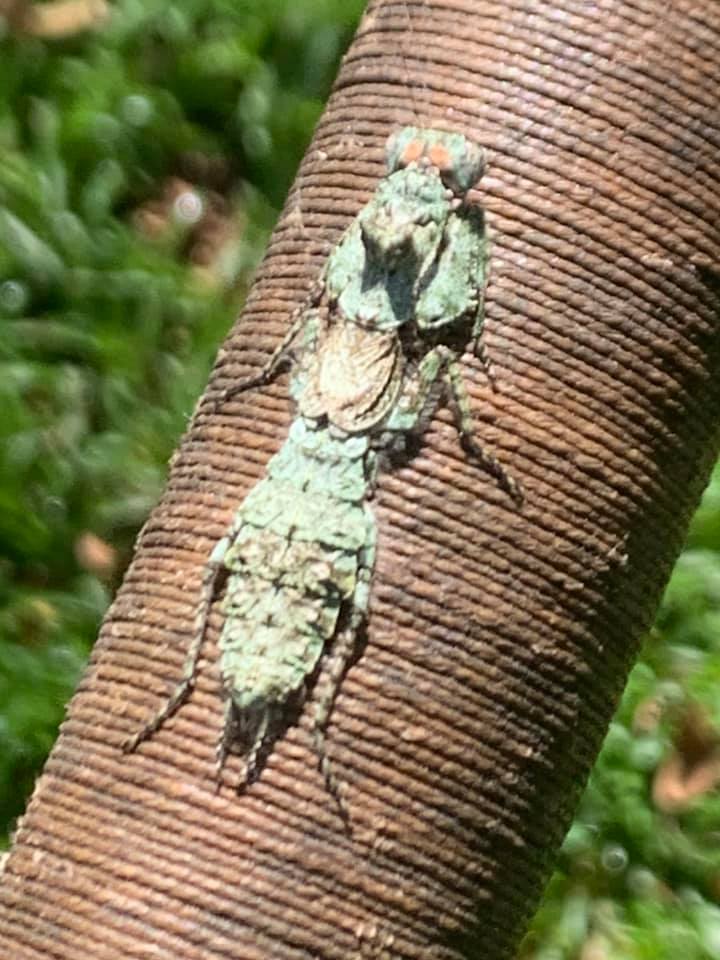 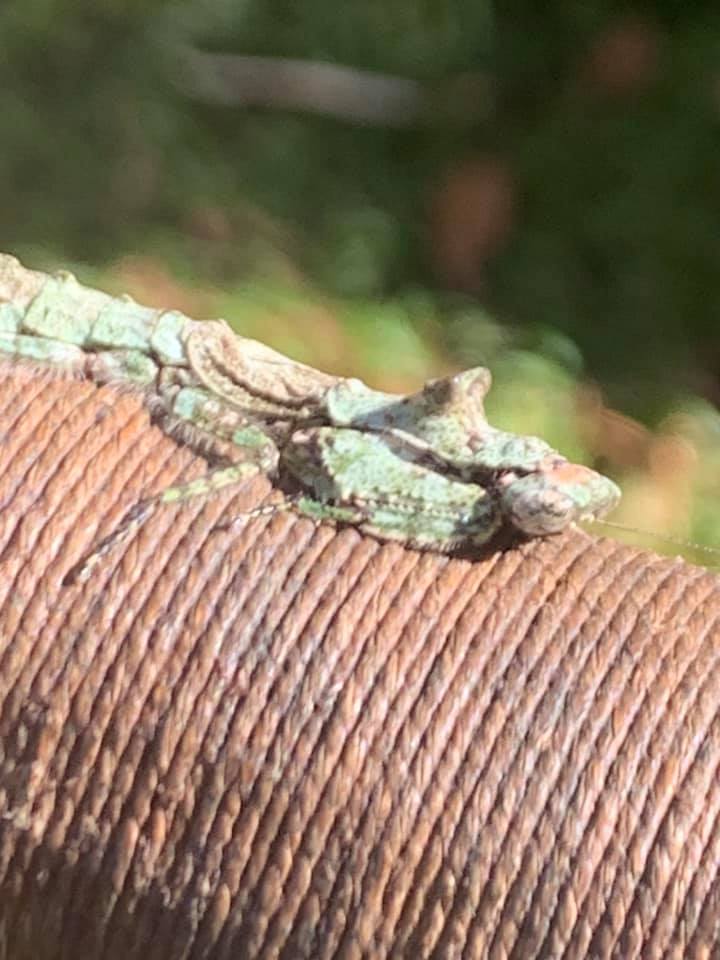 I'm converting my numerous comments into an "answer" -- I don't currently know the exact species, but I can at least explain some of my thoughts more completely.

Your specimen looks a lot like Gonatista grisea, a tree mantis that mimics a lichen -- as you mention in your post. However, G. grisea, is native to the southeastern USA. I could find no evidence of any reports finding this species in Africa, so we will rule it out.

If we examine some other species of the Gonatista genus (e.g., G. jaiba, G. major, G. phryganoides, and G. reticulata) we find that they are all neotropical and not found in Africa. Therefore, let's look elsewhere.

So, I would recommend examining other close members in the same family that are found in Africa.

However, perhaps trying to solve your unknown specimen using taxonomic and trait-similarity approaches could be misleading.

Schwarz & Roy (2019) do suggest that the morphology of male external genitalia may be useful for relating individuals as these traits tend to be fairly congruent with more recent molecular phylogenies. You could start there for further research.

If you find a good key for your region, you might want to check out Brannoch et al (2017) for a "Manual of praying mantis morphology, nomenclature, and practices" to help you with all the mantid jargon. [it appears to be a very thorough and excellent resource!].

I will update this post if I find anything more definitive for you...

Here is a description of the features within the Genus from the link above and why I believe your picture reflects this genus. To narrow down to species appears more challenging as there are many species in the genus:

The bark mantises and ground mantises (genus Tarachodes) are praying mantids now placed in the family Eremiaphilidae[1] that are native to the Afrotropics. They are generally light brown but more silvery on the wings. The wings are attractively reticulated, and the veins may be mottled dark and pale.[2] The head is wider than the pronotum, which is rounded anteriorly, and doesn't overlap with the rear of the head. The pronotum is depressed, with its sides more or less parallel, and only a weak supra-coxal bulge is present.[3] The anterior tibia are flattened and greatly expanded longitudinally, and the tibial claw does not fit into a pit between the 1st and 2nd external spines of the anterior femora, as in a few mantis groups.[3]