What is the significance of the phospholipid bilayer being two-dimensional?

I'm wondering about the significance of the phospholipid bilayer being a two-dimensional fluid.

I found this powerpoint:

I also found that thetwo-dimensional fluids have limited degrees of freedom.

I'm guessing that based on the powerpoint I found that the limited freedom of movement is optimal for the purposes of the phospholipid bilayer in, let's say, a human brain cell, as having too much freedom in a 3-dimensional fluid would be bad in some way (break apart???), or a 1 dimensional fluid would be bad since fluidity is important for the addition or removal of membrane proteins.

I realized after reading The fluid-mosaic model (Singer and Nicholson, 1972) and Revisiting the fluid mosaic model of membrane structure, I realized that I did not have a basic understanding of the thermodynamic principles espoused in Singer’s article.

So, after combing the internet, I found an essay by Erwin Schrodinger titled “What is Life.” I’ve been reading, and this passage seemed relevant to my question about the significance of the phospholipid bilayer.

“PHYSICAL LAWS REST ON ATOMIC STATISTICS AND ARE THEREFORE ONLY APPROXIMATE And why could all this not be fulfilled in the case of an organism composed of a moderate number of atoms only and sensitive already to the impact of one or a few atoms only? Because we know all atoms to perform all the time a completely disorderly heat motion, which, so to speak, opposes itself to their orderly behaviour and does not allow the events that happen between a small number of atoms to enrol themselves according to any recognizable laws. Only in the co- operation of an enormously large number of atoms do statistical laws begin to operate and control the behaviour of these assemblies with an accuracy increasing as the number of atoms involved increases.” —Schrodinger

It was here that I realized that a higher number of atoms allowed not only for statistical laws to control the behavior of the assemblies, but that the higher amount of smaller parts created a recognizable pattern that conforms to the laws of statistics.

At first glance, It doesn’t matter how large or small the parts are, what matters is how they compose a larger whole due to their behavior, and the behavior is determined by their properties.

Maybe atoms are the “smallest” parts because less surface area allows for more powerful and simple properties. And in relation to biology, more complexity is added to the larger “wholes” that are made of smaller parts.

A single Atom is simpler than a single cell by virtue of cells being comprised of many atoms.

Another thing Schrodinger wrote is this:

“ An entire newcomer should not expect to obtain from the following few pages a full understanding and appreciation of the subject, which is associated with the illustrious names of Ludwig Boltzmann and Willard Gibbs and treated in textbooks under the name of 'statistical thermodynamics'. If you fill an oblong quartz tube with oxygen gas and put it into a magnetic field, you find that the gas is magnetized. The magnetization is due to the fact that the oxygen molecules are little magnets and tend to orientate themselves parallel to the field, like a compass needle. But you must not think that they actually all turn parallel. For if you double the field, you get double the magnetization in your oxygen body, and that proportionality goes on to extremely high field strengths, the magnetization increasing at the rate of the field you apply. This is a particularly clear example of a purely statistical law. The orientation the field tends to produce is continually counteracted by the heat motion, which works for random orientation. The effect of this striving is, actually, only a small preference for acute over obtuse angles between the dipole axes and the field. Though the single atoms change their orientation incessantly, they produce on the average (owing to their enormous number) a constant small preponderance of orientation in the direction of the field and proportional to it. This ingenious explanation is due to the French physicist P. Langevin. It can be checked in the following way. If the observed weak magnetization is really the outcome of rival tendencies, namely, the magnetic field, which aims at combing all the molecules parallel, and the heat motion, which makes for random orientation, then it ought to be possible to increase the magnetization by weakening the heat motion, that is to say, by lowering the temperature, instead of reinforcing the field” —Schrodinger

Likewise, maybe, through optimal conditions and or more and more atoms, you are able to increase the output of the behavior that is controlled by statistical laws.

Finally, maybe, the phospholipid bilayer is but one step towards a more complex system. From atoms to molecules, to a whole cell... and optimal conditions or more atoms increase the likelihood of life, from the simplest to the most complex.

Of course, I have no idea what kind of conditions would allow a transition from let’s say a fish to a reptile.

Edit2: So basically, the bilayer being a two dimensional fluid is a function of the distinct parts of the bilayer conforming to statistical laws to create a more complex system by necessity.

The cell membrane is a two dimensional fluid because individual molecules can move freely in 2 dimensional plane but not in three dimensions. in this image phospholipids can move left and right and in and out of your screen but they are not free to move up or down. 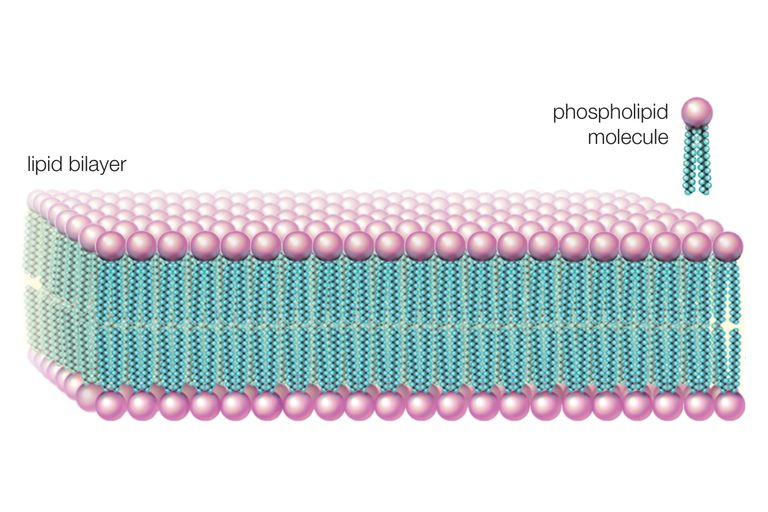 This is true becasue each phospholipid has a polar and non polar end, the similar ends are attracted to each other but the dissimilar end repel each other, making the membrane sheet like layout one of the only chemically stable layout for significant numbers of them. if a phospholipid tries to move up or down (in or out of the cell) the other molecules around it repel it pushing it back into place, meaning it requires a great deal of energy to disrupt this layout.

It is a two dimensional fluid because, while in water it behaves in the following way. To use the existing image, if a phospholipid moves in or out of the screen or to the left or right, the repelling parts of the molecules have not moved closer to their opposite part on other molecules so the can freely move in this way, that is 2 dimensions of movement. If however they try to move in the third dimension (up and down on the image) they cannot becasue the hydrophobic (nonpolar) ends of one phospholipid would have to approach the hydrophobic (polar) end of other phospholipids and move away from the hydrophobic (nonpolar) ends of other molecules both of which are energetically unfavorable (that require a lot of energy to do). likewise the hydrophilic ends are attracted to water (which is also polar) while the hydrophobic ends are repelled by water. So unless a tremendous amount of energy is put into the system they will stay in this arrangement, you can disrupt it with enough heat, which is one of many reasons enough heat will kill organisms.

All these behaviors are import for the many functions plasm membrane fulfill, most importantly as a barrier that can stop some molecules from passing through it and allow others, while still being flexible and self repairing.

A two-dimensional fluid like structure, like a phospholipid bilayer, can generate closed surfaces that can envelop an entire region of space. This is what allows life to compartmentalize, to create separate pocket environments that are set apart from their surroundings. A single compartment generated by a single bilayer folding in on itself is what is called a liposome. A non-2D variant of a liposome would be a micelle.

A micelle is formed by surfactants (things that are like phospholipids, with a polar group and a non-polar tail) with a single fatty-acid chain such that they can't form bilayers. Instead, a sheet of micellar surfactants, when surrounded by water, close in on itself with the fatty acid towards the interior of the micelle, away from the water. 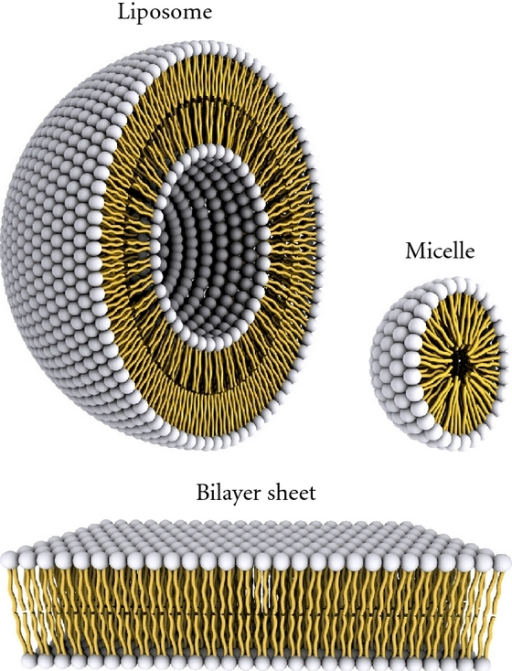 The two things might look the same, by they are not. Micelles have an inner chemical environment very different from their outer environment. Whereas micelles are surrounded by water, like liposomes, their inside is strongly hydrophobic. Only the polar heads of the surfactants in a micelle act as a surface, but the entire structure is solid and filled. When micelles assemble, they pack like a solid sphere.

Contrast that with the 2D character of the bilayer in the liposome. The bilayer acts as a boundary between an inner aqueous compartment and the outside, also aqueous. The two compartments can be kept separate even if their chemical nature is pretty similar.

The most important application of this property is that a cell can become insulated from its environment. But this is useful in all sorts of compartments inside the cell such as the maintenance of electrochemical gradients across the inner and transmembrane spaces in mitochondria, or the upkeep of specific control systems inside the nucleus.

Besides this property of working as a boundary without disturbing the interior, the fact that the membrane acts as a two-dimensional environment in an of itself means that stuff can diffuse laterally through the membrane without having to go through the interior of its inner compartment. This allows the cell to have specific arrays of proteins and glycoside-bound phospholipids freely diffuse through the membrane, controlling access and proving sensory perception of the outside without disturbing the ongoing chemical work inside the cell or any of its compartments.

I am not sure if this is the relevant information that the slide's author was referring to, but it striked me as a pretty big deal. So there you have it.