Is there a realtime molecular clock within the genome to co-ordinate the developmental sequences in an embryo?

Assuming there is a molecular clock, is it possible that the clock is switched on at the time of fertilization, and the zygote transfers the elapsed time to the progressive generations of the cells?

In the 1960s, nuclear transplant experiments established that molecular signals in the cytoplasm can dedifferentiate terminally differentiated nuclei, "resetting" your molecular clock, or in the more common terminology "rerunning" the "developmental program" to yield viable animals.

This "developmental program" metaphor has been frequently used to describe this process, seeing development as a series of gene regulatory cascades; they called it a program because they were thinking of procedural computer programs. It isn't really a clock so much as a complex process by which different sets of genes are turned on and off in a concerted fashion, where one step depends on what happens in the previous step. An undergrad course discussing some of the mechanisms of this is posted here.

We've known for many decades that interrupting cellular processes such as transcription, translation, and DNA replication tend to arrest development at different points (for one early example see here).

A good example of a step/series of steps in the developmental program is the maternal-to-zygotic transition in metazoans, where embryos transition from using maternally deposited mRNAs as molecular raw material to de novo transcription of their own mRNAs.

From the linked review: 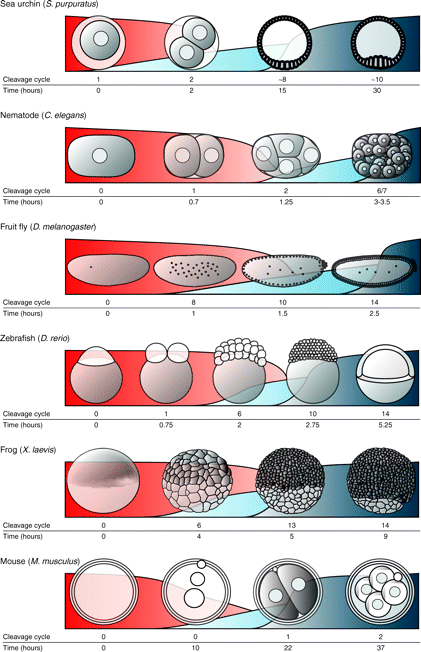 Figure 1. A comparative overview of the maternal-to-zygotic transition (MZT) in several model organisms. Key embryonic stages for each model organism are depicted schematically above the corresponding cleavage cycle and time after fertilization. The red curves represent the degradation profiles of destabilized maternal transcripts in each species. The light and dark blue curves illustrate the minor and major waves, respectively, of zygotic genome activation. The last embryonic stage presented for each organism is the developmental point at which there is a major requirement for zygotic transcripts.

This transition requires that the developmental steps based on maternally-deposited mRNAs have completed successfully before de novo transcription of embryonic RNAs can begin.

Not the answer you're looking for? Browse other questions tagged development embryology cytogenetics or ask your own question.

10
How is human biological clock modelled in modern science?

2
Which part of the genome are the developmental sequences of embryogenesis located?
5
There are linear and rotary molecular motors in the cells. Do any of them have a fixed or stable frequency or speed?
6
Is telomere shortening consistant over consecutive cell divisions from zygote to a differentiated cell?