What species of duck is this?

What species of duck is this? See below photo. Head colour is green like a mallard, but that's pretty much the only similarity. Spotted in Leicestershire, UK. 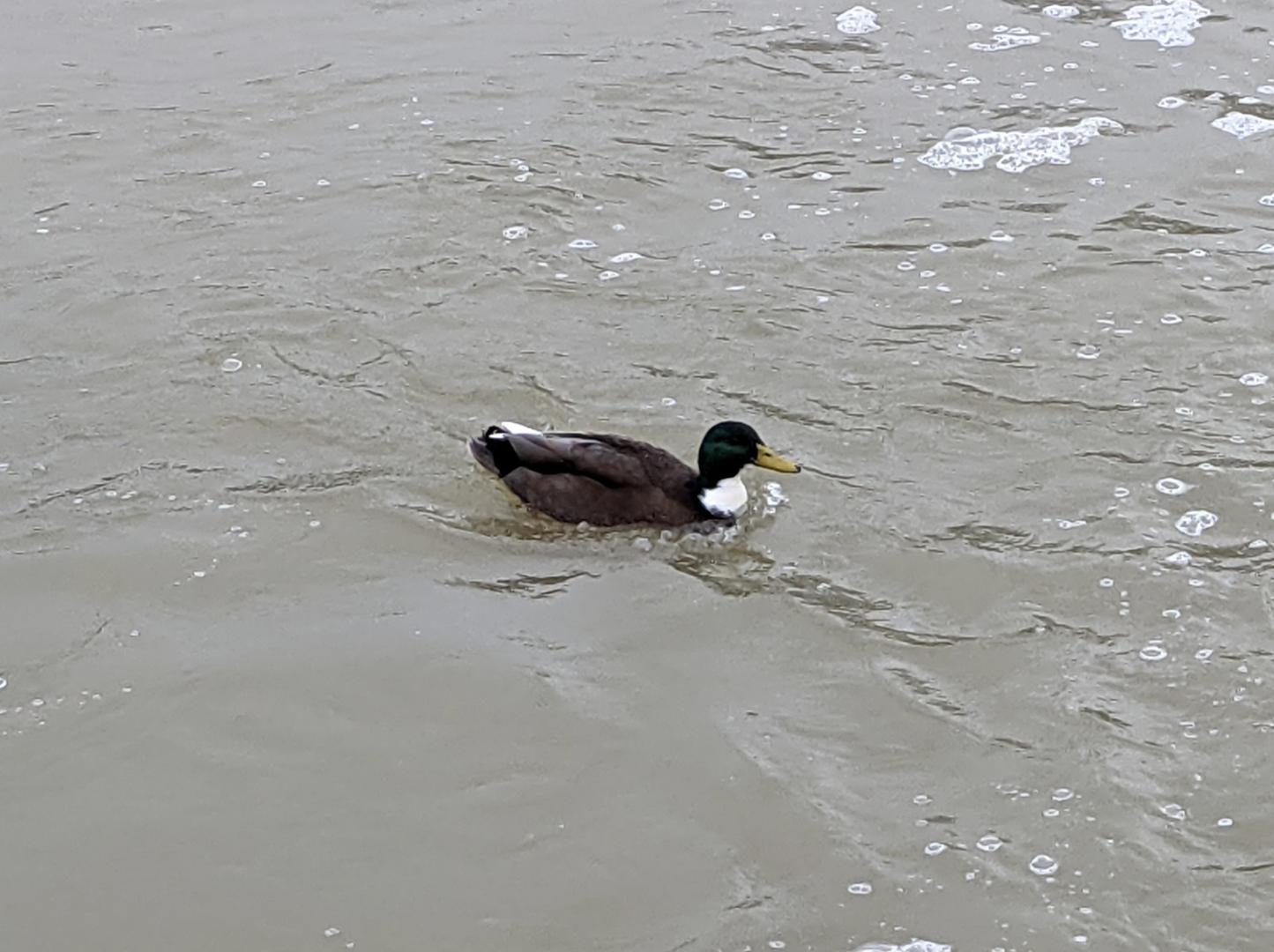 Probably a domestic hybrid of a mallard.

If your duck has large patches of white where you didn’t expect it, think domestic duck.

Mallards (Anas platyrhynchos), which have the identifiable green head in the wild, are only 1 of 2 species of ducks that have been domesticated. So it would be no surprise if a strange looking mallard was in fact, well, a mallard.

Again, according to Cornell:

Another common form [of the domestic/hybrid mallard] is the bibbed version. It has a sort of normal body and head plumage, and a white chest.

The passion for weird plumage in domestic ducks does not stop with white, but can go the other way too. Some breeds are darker than normal Mallard plumage

These descriptions both match your specimen quite well.

Although your picture is low quality, it appears to me that the posterior feathers of your specimen also are not straight. Again, quoting Cornell:

Watch for the little curled feathers on the back of the male, above the tail. Only the Mallard and its domestic descendants have those.

Finally, most hybrid ducks that come from some domesticated origin tend to be larger than non-domesticated specimens since early domestication efforts emphasized large size for food (vs simply plumage for appearances). Your image has no relative scale, so I cannot comment on whether this applies to your specimen or not.

In terms of a specific "name" for such a hybrid?

I did find evidence that some people refer to domestic-hybrid mallards like your dark-plumage, white-bibbed mallards as "manky mallards", though I'm not sure how ubiquitous this is. For example, see here and here.

I think it's likely a mallard hybrid. These sites have examples of crosses between mallards and domestic ducks (and others as well):

There isn't any specific pattern but the light coloring below the head seems to be a common occurrence in hybrids, with some variation in the rest of the coloring. It's hard to find more reputable resources because of the variation, but I don't know of any other duck that would fit the ID.

15
What kind of bird species is this?
4
What in the world is this critter?
6
What is this arachnid?
23
What is this fish?! Is it even real?
13
What species of fox is this?
5
What Species of Duck/Waterfowl is this
4
Identification of a Kakadu bird
7
What kind of big bird is this seen walking around Taipei?
1
Strange yellow flower in shrub Species ID