Help with understanding XKCD's “How Vaccine Failure due to Viral Vector Immunity Works” Why is this response a failure exactly?

Full disclosure; no biology since 9th grade, so please go easy on me!

XKCD's 2406 shows a literal wooden Trojan Horse outside a castle, but instead of bringing it inside the castle walls, the soldiers recognize the shape as horse-like:

Look! It's a statue of that horrible animal that trampled Steve!

and the soldiers decide to destroy and dispose of it rather than to let it in.

The title of this XKCD is

How Vaccine Failure Due to Viral Vector Immunity Works

Wikipedia's Viral_vector; Vaccines explains the basic idea, which is (I think) that the viral vector's genome is modified so that it includes a new protein on its surface that serves as an antigen, and the host builds and learns an immune response to this antigen that will then immunize the host against an infection by another organism that also presents this antigen.

Question: The XKCD shows recognition and an analogy of an immune response, so why does the subtitle call this a "Vaccine Failure"? 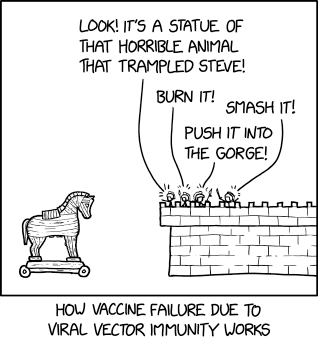 Yes, the cartoon is a description of immune action.

However, this cartoon is describing viral vector immunity.

The first exposure is a viral vaccine. This alerts and educates the immune system about not just the intended antigen, but also the (harmless) carrier virus which is represented by a horse.

The second exposure is a different viral vaccine. The immune system immediately mounts a successful response against the vaccine because is recognises the carrier virus.

So the immune system doesn't get the chance to learn about the antigen associated with the second virus.

A example of viral vaccine failure would be useful - I will see if I can find one if no-one else does.

Viral vector only serves to deliver to cells the proteins/mRNAs necessary for triggering the immune response. In this sense it is like a Trojan horse - it is not supposed to cause suspicion, since otherwise it fails.

In this case the immune system recognizes the vector as a dangerous virus, destroing it before it delivers its load.

I find this xkcd rather convoluted...

This cartoon imagines that, rather than sacking Troy, the Greek soldiers inside were planning to help the Trojans recognize dangerous aliens who were preparing to attack. The horse represents the viral vector that carries the genetic material for producing the antigens that the immune system needs to learn to detect. The vaccine fails because the Trojans recognize the horse as an invader and destroy it, killing the soldiers who they didn't realize wanted to help them.

Not the answer you're looking for? Browse other questions tagged vaccination immunity or ask your own question.

4
What is the mechanism by which passive immunity works?
5
Why do COVID19 serology tests focus on the nucleocapsid while vaccine efforts focus on the spike?
4
How the vaccine based on “non replicating viral vector” is produced?