Are sensory mechanoreceptors and mechanical nociceptors the same type of neurons or are they different?

I always supposed the neurons / receptors which transmitted touch and pain were the same, since they react to stimulus which are the same but with different intensity, and they just sent a stronger signal in the case of something that has to be interpreted as pain. Though recently I've read some articles that imply they aren't, even so they don't say it directly. Reading more information I found this,

A nociceptor ("pain receptor") is a sensory neuron that responds to damaging or potentially damaging stimuli by sending “possible threat” signals. 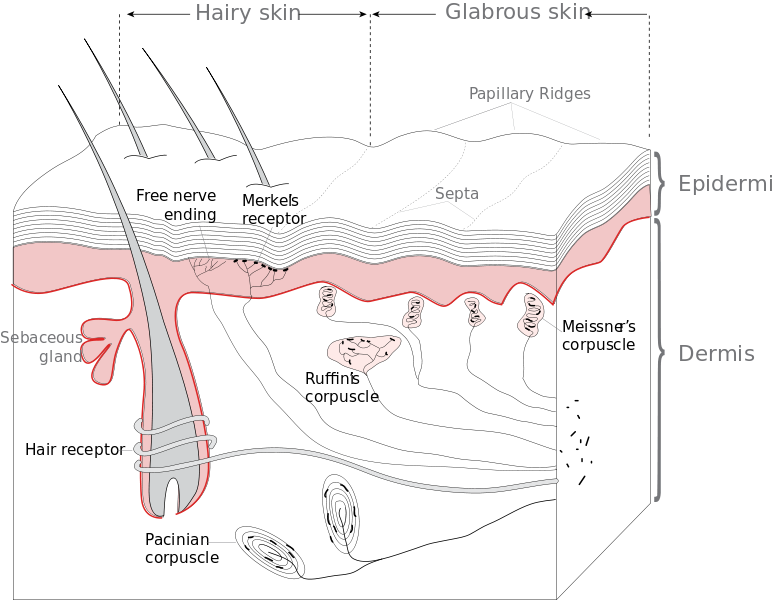 I don't know if this directly answers your questions, but I think some confusion may stem from an underlying misconception of receptor vs receptor cell.

In most contexts (though not this one), 'receptors' do not refer to cells. Receptors are proteins on the cell membrane that transduct some signal/stimulus to the cell. Sometimes a "normal" peripheral neuron will have end processes that contain receptors that pass the signal directly to the neuron. Other times, a special 'receptor cell' is present. These cells are labeled as mechanoreceptors or nociceptors. The difference here is that a "standard" neuron is responsible for signal gating and propagation, whereas a receptor (cell) is primarily responsible for converting an external stimulus into a chemo or electrical signal recognized by "normal" neurons (or other cells).

Not the answer you're looking for? Browse other questions tagged neurophysiology sensation pain senses neuron or ask your own question.

3
What can myelination tell you about the evolution of sensory receptors?
2
What specific sensory nerves act as receptors for "pins and needles" (neuropathy)?
8
What does pain look like in wave form?
9
Are sensory receptors neurons?
6
Can the dendrites of sensory neurons be a meter long?
2
How do different sensory stimuli differ in nerve signal?
2
What are the response frequencies of sensory neurons?
1
Differences between neurotransmitters and neuromodulators
1
Why isn't hearing the same as tasting? How do we feel and differentiate external stimuli?