Structure and reactions of the cofactors of oxidoreductases such as ferredoxin

I have seen the word flavoprotein being used in place of ferredoxin in few places and vice-versa. I have not found any source that mentions them both together and explains the relation between them.

Is there any relation between the two? Are they the same or do they serve the same purpose?

Enzymes catalysing oxido-reductive reactions (oxidoreductases) do so with the aid of non-protein molecules (prosthetic groups or cofactors) at their active sites. The three main types of such prosthetic groups or cofactors are iron–sulphur clusters, derivatives of flavin (FAD and FMN) and nucleotide derivatives of nicotinamide (NAD and NADP). The groups of proteins incorporating these type of cofactors are often referred to by the general terms ferredoxins (also iron-sulphur proteins), flavoproteins, and NAD(P)-linked oxidoreductases, respectively.

The vast majority of enzymes are proteins, linear polypeptide chains folded into specific but irregular spheroidal shapes. In addition to interacting with the reaction substrates, the amino acid side-chains of the polypeptide chains participate in the actual reactions catalysed by many enzymes, and in many cases are sufficient for the catalytic properties of enzymes. However for the catalysis of some sophisticated reactions, additional non-protein molecules are required — metal ions or organic molecules — known generally as ‘co-factors’, ‘co-enzymes’ or ‘prosthetic groups’. This is the case for the various enzymes termed oxidoreductases, which catalyse oxidation/reduction reactions, involving the transfer of electrons. 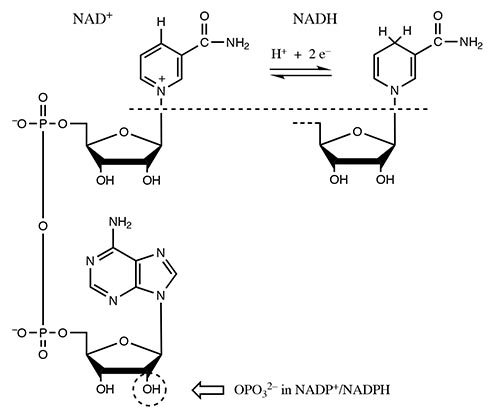 Proteins with bound NAD or NADP (non-covalently) are the most common type involved in oxido-reductions, and have systematic names composed of the cofactor, substrate and ‘oxidoreductase’.
e.g.
Systematic Name: lactate:NAD+ oxidoreductase
Common Name: lactate dehydrogenase)

The other common cofactors in oxidoreductases are flavin adenine dinucleotide (FAD) and flavin mononucleotide (FMN). The isoalloxazine ring is the electron acceptor, and the oxidized and reduced forms are termed FAD (FMN) and FADH2 (FMNH2), respectively. 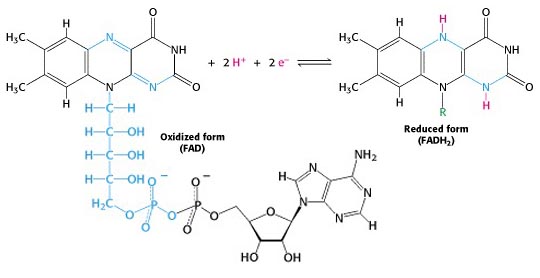 Whereas the above two oxidoreductases are common in intermediary metabolism, those containing iron–sulphur clusters (some of which are known as ferredoxins) tend to be involved in more specialized and ancient reactions, such as photosynthesis, tagged in the question. The diagram shows one particular type (2Fe–2S) of iron–sulphur cluster and its covalent attachment to the ferredoxin through cysteine residues. 4Fe–4S stoichiometries are also found, as well as some others.

The electron transfer involves changes in the oxidation state — Fe(II)/Fe(III) — of the iron.

The figure also provides a good illustration of the relationship between a co-factor and the protein in which it resides.

The situation here is complicated by the fact that iron–sulphur clusters are found in other proteins besides those termed ferredoxin, including some specialized oxidoreductases involved in the electron-transport chain, and in nitrogenases. The term ferredoxin is historical rather than systematic.

Differences between these oxidoreductase cofactors

The specific roles played by these three cofactors in oxidoreductases is a topic of its own. However, it should be mentioned that an important difference is their standard reduction potentials, the biochemical background to which can be found in Section 18.2.1 of Berg et al., available online.

Electron transport occurs between the different cofactors in certain circumstances, one of which is photosynthesis where electrons are transferred from ferredoxin to NADP+. The enzyme catalysing this — Ferredoxin-NADP+ reductase — uses the third type of cofactor — FAD!

Not the answer you're looking for? Browse other questions tagged enzymes photosynthesis nomenclature or ask your own question.

0
Do the light and dark reactions happen at the thylakoid?
2
Relationship between leaf structure and Photosynthesis rate
3
Where do the H+ ions come from in light reactions?
6
What is the relationship between the light and dark reactions of photosynthesis?
2
Enzymes and Reversibility of Reactions
3
Why don't phosphatases both add and remove phosphate groups if enzymes catalyze reactions in both directions?
2
Do there exist enzymes that can take up multiple cofactors to do different reactions?