What kind of salamander is this?

This guy was found in central Virginia, under a flower pot. He's about 3 inches long, because part of his tail is either missing or it's just short. He looked dried out, so of course I wet my hand, scooped him into a small container, and moved him to our birdbath (which is on the ground and had been recently rinsed so the ground was plenty moist). I ran my hand (still wet) over his back and he seemed happier and started moving around.

However, I can't seem to find on Google just what kind of salamander he is. The VA Herpetological Society has an entry for a Jefferson Salamander, but those are only found in North/West VA. Attached is a picture of him (blurry, sorry) when I found him. I have a video of him coming out of the container and going under the leaves next to the birdbath, but it's too big of a file to put on here. Instead, here is a link to the file in my Google Drive: Salamander

Edit: I checked some pictures I had of him, and he has five toes on his hind legs. He is a dark gray-brown with faint mottling and a semi-light underbelly. Sorry that I didn't say this earlier. Hope this helps!

Can anyone identify him? 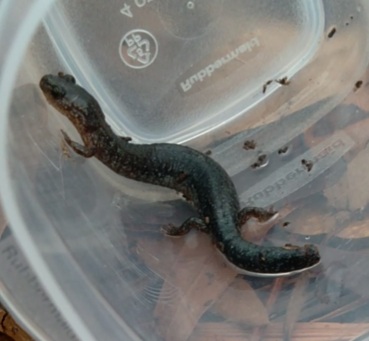 Maybe it's a Mabee's Salamander, Ambystoma mabeei. Unfortunately, I can't really see the underside in your video, but I have the sense that it is a lighter color. The clubbed tail, with an apparent break, seems like it may have been autotomized or otherwise injured, making it harder to compare. I had the impression your example had dark spots dorsally and lightening ventrally, as can be seen in the image above. Some other images are a bit different. However, Mabee's Salamander is only found in "six localities in the coastal plain in extreme southeastern Virginia: the cities of Hampton and Suffolk and the counties of York, Southampton, Gloucester, and Isle of Wight. It is also found in Newport News." and is considered threatened, so unless your location matches what you read there it is still not likely to be the answer.