Will Fst (inbreeding coefficient) always be a value close or at 0 in asexual populations?

FST is the average inbreeding coefficient of a total population. The equation is:

$Var(T)$ = variance of the allelic state in the total population

If the population is asexual, meaning they are parthenogenetic, would $F_{ST}$ be at or close to 0? Can this not be assumed?

In the context of this question I am considering the whole genome or just one allele.

It depends on whether mutation exists. Generally mutation is happening in biology, but in its absence, yes it will be at or near zero:

From that paper, see this figure: 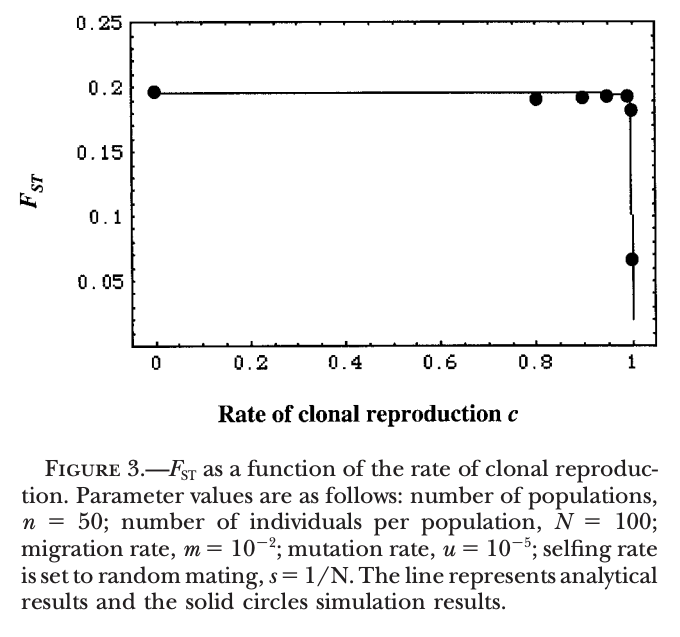 So, basically, the exact level of $F_{ST}$ in such cases will be controlled by the mutation rate. That figure shows a value above zero at 100% clonal reproduction because it does have a nonzero mutation rate. There is also nonzero migration between populations, so that will have the effect of reducing $F_{ST}$ somewhat. So here the value is controlled by those 2 factors. Another thing worth noting is that, if there is no initial variation between populations before the split, that will tend to increase $F_{ST}$. So it does matter how much variation exists overall.

Not the answer you're looking for? Browse other questions tagged population-genetics population-biology sex asexual-reproduction fst or ask your own question.

3
Population genetics and the fitness probability distribution. Why is the arithmetic mean all we need?
6
Why does the slope of parent-offspring regression equals the heritability in the narrow sense?
3
Altruism in viscous (asexual) populations
7
Within and Between Allelic Class Diversity
3
What exactly is extreme heterozygosity and how does it work?
7
Easy derivation of Kimura's approximation for the probability of fixation of a mutation