What does ΔC and ΔN mean with regards to a protein sequence?

I am reading a paper about the regulation of the nuclear export of the protein GSK3 and I have come across the following statement:

Any insights are appreciated.

The cited paper (Franca-Koh, 2002) noted a correlation between some forms of Frat and GSK3 cellular localization. Without Frat, GSK3 is cytoplasmic. In the presence of Frat, the heterodimer Frat-GSK3 translocates to the nucleus. As Frat is phosphorylated, it was unclear then what mechanism(s) was(were) involved. To investigate the role of Frat, the authors hypothesized that a region of Frat may be involved, not necessarily the whole protein.

Added Note
Here is a co-crystal structure of GSK3β (N-terminal lobe in orange and C-terminal lobe in cyan) complexed with Frat1 peptide 197-226 (forest green) and an inhibitor (N-(6-(3,4-dihydroxyphenyl)-1H-pyrazolo[3,4-b]pyridin-3-yl)acetamide) (green) as deposited with RCSB as entry 5OY4.pdb . The presence of the inhibitor helps locate the active site in the image of the GSK3b protein kinase. 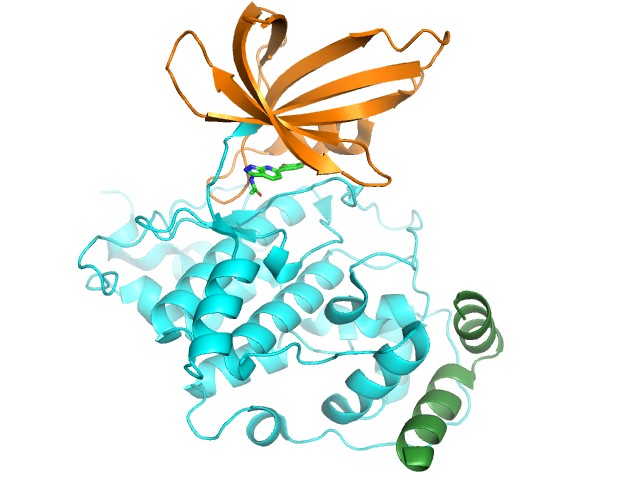 6
What does units/mg mean for Streptavidin
0
What do arranging and assigning mean in sequence annotation?
3
Confusion about Photosystem 2 with regards to lysis of water
1
Is protein folding symmetric with respect to reversing the sequence order?
1
What does 'half life' of a protein mean?
1
What is the difference between a paralog and an isoform?
1
What does it mean to "nucleate multi-protein complexes"?