What is the evidence that australopithecines were bipedal?

Before the discovery of Australopithecus afarensis in the 1970s, most anthropologists believed that an increase in brain capacity had preceded bipedal locomotion. However, this reconstruction of the Lucy skeleton shows that the A. afarensis was bipedal even with a brain size of around 400 cc.

But the actual Lucy skeleton does not include feet, and only has two partial leg bones.

How do anthropologists determine, based on the bones preserved, that A. afarensis was bipedal?

Mainly because of the characteristics of the pelvic joint with the femur and the foramen magnum (the hole the spinal cord uses to connect with the encephalon). Also, there are more specimens other than Lucy, and there also exist fossil footprints (for instance the Laetoli footprints). All this evidence points to a bipedal walking. 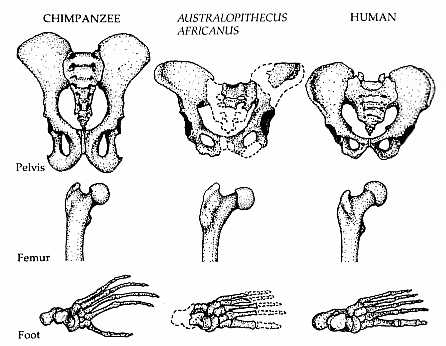 As you can see, the Asutralopithecus pelvis resembles human pelvis more than chimpanzee's (wich is adapted to a primarily quadrupedal movement). 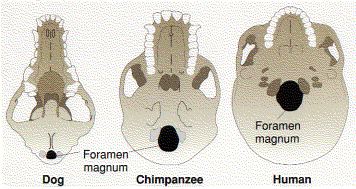 In this image it shows the foramen in chimpanzees, Australopithecus and modern humans, and you can see that the position in the second is at the base of the skull, just like in Homo.

It is assumed that the bipedal locomotion is an adaptation to the savanna environment, where trees were rare. Bipedalism also allows a better visual field and it has more energetic efficiency.

This is a great question and one we should all be asking. Given that our closest relatives the great apes are all quadrupedal, our ancestors at one point must have also been quadrupedal. In fact we as humans are mainly quadrupedal between our first nine to fifteen months of postnatal life. As adults we still engage in quadrupedal behaviors from time to time. For instance, humans often copulate, climb steep hills and walk through thick underbrush on all fours. Because all great apes also engage in bipedal behaviors the difference between us and them is one of frequency. As adults we are much more likely to be bipedal while great apes are much more likely to be on all fours. Because changes in behavior precede changes in structure, to diagnose fossil behaviors we use characters that change during the individual's lifetime in response to practiced behaviors (i.e if we used characters that are mainly inherited to diagnose behaviors we would not know if it is the fossil in question that practiced these behaviors or an ancestor of the fossil that did). In the case of Lucy we can use the x-sectional area of the arm bone vs the x-sectional area of the lumbar vertebra. Bone x-sections change during our lifetime in response to the loads placed on them. Because bipeds place all their upper body weight on their lower back vertebrae and none on their arms, while quadrupeds distribute their upper body weight on their arms, it would be expected that a biped have a much larger lumbar and smaller arm x-sectional area than a quadruped. This expectation is confirmed in comparisons of humans to great apes, or to baboons and other large monkeys. Notably, Lucy shows ratios that are most similar to baboons (a small lower back and large arms) suggesting it wasn't mainly a biped but often practiced quadrupedal behaviors. Lucy does not preserve a foramen magnum and shows no pelvic characters that are exclusive to bipeds. As you note it only preserves a thigh bone, a leg bone, a single foot bone and two toe bones, none of which show exclusively bipedal characters. The foot bones of the first family fossils which are ~200,000 yrs older than Lucy and have been assumed to be the same as Lucy(but may not be) show a gorilla-like foot.

Unfortunately, paleontologist would not gain as much fame or money if they found a possible ape ancestor. As such to be able to claim it is human they claim these fossils are bipeds using whatever human-like characters they exhibit to associate the fossil to bipedality. More than likely Lucy represents an African great ape that diverged from the common human African ape group around the time of the chimpanzees/gorilla/human split. Lucy is thus a human ancestor and a biped for convenience sake and not based on facts.

Not the answer you're looking for? Browse other questions tagged evolution movement or ask your own question.

13
Is there any evidence that a virus can modify human evolution
18
Why do we assume that the first humans were dark-skinned?
9
What were the first neural systems like?
5
Does the anatomy of our hand result in (computer) mouse-accuracy that varies by direction of movement?
3
What Evidence Do We Have For the First Mammal?
15
What is the evidence that plants and animals had a common ancestor?
2
Were the Francevillian biota real?