How does pressure travel through the cochlea exactly?

I cannot find this answer anywhere.

(1): Does the pressure somehow permeate through Reissner's membrane (between the scala vestibuli and scala media), move through the scala media (without disturbing any hairs in the organ of Corti), and then push on the basilar membrane from above, which would allow for this front-to-back wave motion?

(2): Does the pressure move the basilar membrane from below during its "return trip" going back-to-front through the scala tympani?

Background
The most accepted way of viewing acoustic activation of the auditory system is the traveling wave theory (Fig. 1) as posed by the famous experiments of Georg von Békésy in the 1960's. These experiments showed, basically, that the basal part of the basilar membrane (BM) starts vibrating first (near the cochlear 'entrance' at the round window) and as the wave travels through the scala vestibuli, more apical parts get activated (Fig 2). This phenomenon explains the cochlear delay that's seen, i.e., that low frequencies tend to activate hair cells later than high-pitched sounds do (He and Ren 2013).

Reissner's membrane separates the scala vestibuli from the scala media. The traveling wave generates a pressure difference between the scala vestibuli and scala tympani. As you rightfully say, this pressure difference is established across Reissner's membrane and across the BM (Fig. 3). It is the movement of the BM that ultimately results in the sensation of sound (source: Ento Key). In fact, the movement of Reissner's membrane is comparable to that of the BM (Reichenbach et al., 2012). However, Reissner's membrane is not tuned and contains no neural elements involved in hearing. The stereocilia of the hair cells are embedded in the tectorial membrane. The shearing forces between the BM and tectorial membrane eventually result in mechanotransduction (Fig. 3). See Fig. 12.5 on this web page from Neuroscience online textbook for an informative video on the BM movement relative to the tectotial membrane.

The traveling wave is basically confined from base to apex. Because of the tuning of the basilar membrane, high frequencies resonate the basal part (because the BM is stiff and narrow) and low frequencies the apical part (because the BM is wide and floppy). Each time a resonant frequency is met, the BM starts vibrating maximally and basically the frequency cannot go further and its energy is dissipated. Thus, along the way, sound traveling through the scala vestibuli to the helicotrema (the boundary of the scala vestibulu and tympani) more and more energy is used up from the pressure wave. Thus, the basilar membrane is set in motion primarily by the pressure differences occurring in the scala vestibuli and by the time the traveling wave reaches the helicotrema no appreciable energy is left as all auditory frequencies have been filtered out. Remaining energy containing frequencies outside the audible range (roughly 20 - 20,000 Hz) continue to travel to the scala tympani (think of static pressure during a deep dive) and therefore the round window is necessary to act as a buffer (Robles & Rugggero, 2001).

However, there are other theories, notably one from Hermann von Helmholtz, a brilliant scientist of the 1800's that has revolutionized sensory sciences. It is called the 'sympathetic resonance' theory. I am not at all familiar with this theory, as it has been largely abandoned, at least as far as I know. The theory from Von Békésy assumes that the basilar membrane is a place-to-frequency converter that acts like a Fourier transformer, known as the place coding theory. Basically, the traveling wave dissects complex acoustic stimuli into different acoustic frequencies by menas of frequency tuning of the BM (Fig. 2). By contrast, Helmholtz assumed there are tiny tuned elements positioned in the cochlea that basically perform the Fourier transform (not shown here). If you wish to read more of the latter theory, I happily refer you to Bell, 2004). 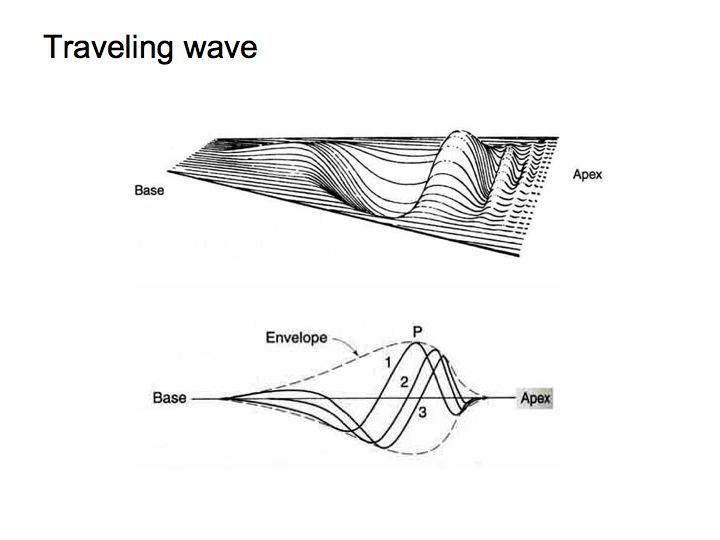 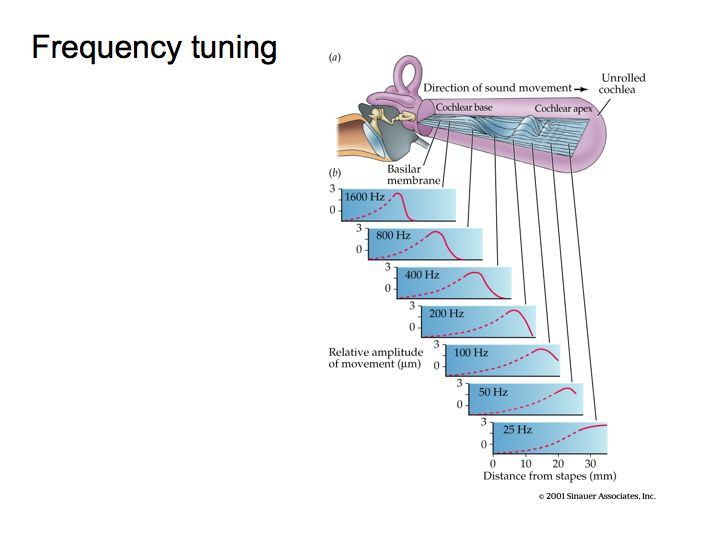 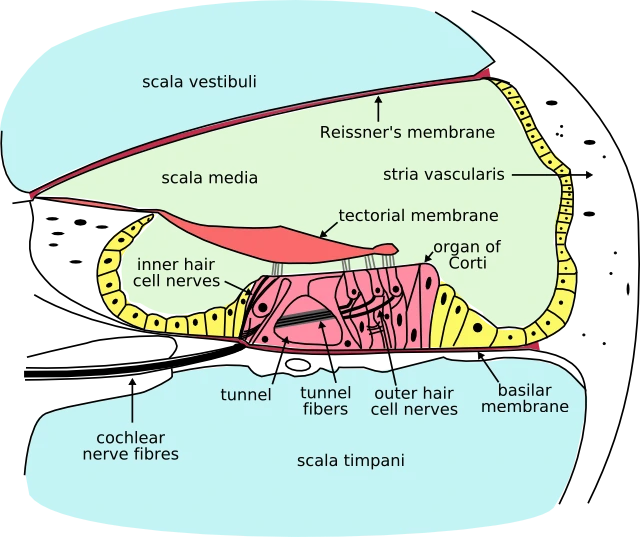 Not the answer you're looking for? Browse other questions tagged neuroscience neurophysiology hearing human-ear or ask your own question.

1
Would tinnitus be explained by perpetually-bent/opened hairs in the cochlea?

2
Does one neurotransmitter travel all the way through the nervous system?
0
While someone's ears pops with pressure, can he/she hear other sound at the same time?
2
Depolarization and hyperpolarization in stereocilia of the inner ear
1
How much does hearing deteriorate with age?
4
Pitch perception - why is the missing fundamental not directly detected in the cochlea?
1
How are sound waves amplified while traveling within the cochlea?
4
How far does eardrum move?
3
Why/how does exposure to noise cause cochlear hair-cell loss?