While reading about primary structures of protein, I came across the following image.

I thought about it : The amino acid residues are numbered from 1 to n starting from the N-terminus to the C-terminus .

But the image below shows only a part of the protein.. so why is the last residue numbered $n+1$ instead of $n$ also, why is this shown as termination? 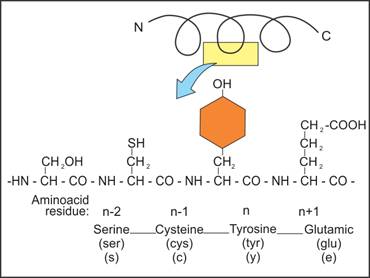 I looked out few papers.. but they seem to be very technical and beyond the scope of my understanding.

This question is a bit hard to answer for me without more context.

However, it is clear that the n refers to the tyrosine which is highlighted in the figure as well (especially the interaction of its phenol). The other positions (n+1, n-1) are shown relative to the tyrosine.

I'm unsure about the role of tyrosine in the primary structure of proteins, but maybe this is more clearly explained where you found the figure. I'm also unsure if the glutamic acid is terminal.

The textbook uses this as an example of the primary structure (amino acid sequence) of a peptide, but it doesn't say why. The reason is that for many protein-protein interactions, the overall shape of the protein (secondary and tertiary structure) plays a very clear role ... but for post-translational modification of tyrosine, serine, and threonine residues, the sequence of amino acids immediately surrounding the amino acid to be modified has a particularly important role. When tyrosine is to be modified, the relevant enzymes are tyrosine kinases, which attach phosphate at the -OH of tyrosine, and tyrosine phosphatases, which reverse this.

For consideration of the specificity of such enzymes it is quite common to align the substrate peptide sites with "n" or "0" being the position to be modified, and "n-1" or "-1" being the amino acid before it, and so on. You can see an example for E. coli here .. not the most common place to look for this phenomenon, but interesting. In humans there are 90-100 enzymes of each type, making these changes to any well-exposed part of a protein consistent with the specificity of that protein, with regulatory effects on the actions of many proteins that include causing them to interact with many other proteins, which contain SH2 domains, which also are targeted largely by the primary sequence around the tyrosine. So these modifications are changing protein activity and associations in a complex network. I think of it as a biochemical protein counterpart of the nervous system, due to the complexity of interactions that can be produced. Note also that these phosphotyrosine sites are very easy to evolve by mutation of very few amino acids, allowing them to be introduced into new proteins to create new regulatory networks as needed, even in organisms with a long time between generations. (They are an example of how "evolving evolvability" has been crucial to permit the evolution of large, complex, long-lived organisms)

For biologists, the most accessible piece of information is looking at the primary sequence surrounding each phosphorylation site, so this does make a relevant example of the concept ... but it would be too hard to explain it at that stage of instruction.